Agave can be a powerful element of overall health when prepared and used properly.

Agave is the genus name that encompasses nearly 30 different species of monocots, most of which are native to Mexico, South America, and parts of the southwestern United States. Agave has been an important medicinal and cultural plant for thousands of years, and nearly all parts of the plants can be used in some way. The primary parts of the agave plant that are used include the leaves, stalk, flowers, and sap, also known as agave nectar. This genus of plants is particularly famous for its role in the production of tequila, while the nectar has become a popular alternative sweetener to regular sugar. [1]

Agave nectar is made by cutting off the leaves of a mature plant – often as long as 15 years, and then extracting the juice from the leaf. This juice is then filtered and heated to break up the complex carbohydrates, resulting in a sweet liquid that is slightly less viscous than honey, but notable sweeter. The nectar has more calories than regular sugar but is sweeter, which means you don’t need to use as much. However, there is still some debate about the safety and long-term health impacts of using this sweetener. [2] 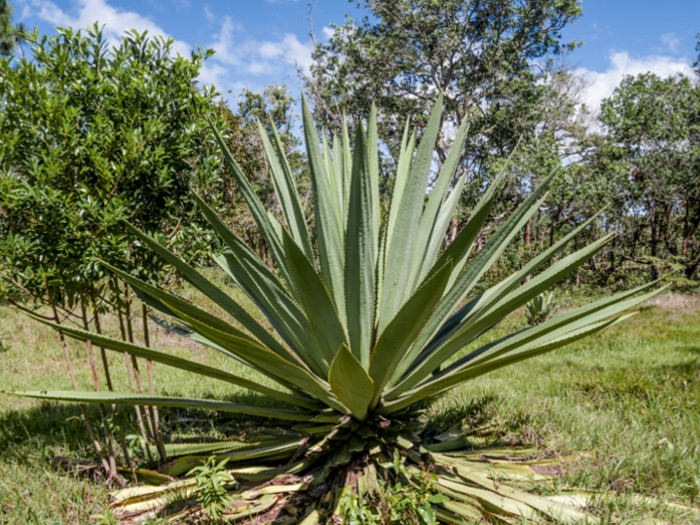 Agave nectar made from the plant is known in Mexico as aguamiel, or “honey water.” Photo Credit: Shutterstock

Nutritionally speaking, agave is a rich source of fructose, but in terms of the danger that can pose to the body, only small amounts of this nectar should be used. In comparison to regular sugar, agave has about 25% more calories. [4]

The most common types of agave include A. americana, A. attenuata, and A. tequilana varieties, among others, such as:

The primary benefits of using this plant and its nectar include the following: [5]

Consuming too much of this nectar could actually have more negative effects than the same amount of high-fructose corn syrup. The low glycemic index of this alternative sweetener is attractive for people with diabete. However, while fructose may not raise short-term blood sugar levels, it can result in insulin resistance when consumed in large quantities. According to a report published in the Nutrition and Metabolism Journal, when consumed in large quantities, agave can cause major increases in blood sugar and insulin levels in the long run and strongly raise your risk of metabolism and type 2 diabetes. [6]

Some research has linked the use of this nectar to an improvement in the following:

Given that it is high in calcium and other important nutrients, however, there is some reason to use this nectar over table sugar. The antimicrobial and antibacterial qualities make it an excellent topical remedy, as it can reduce inflammation. This nectar is also known to improve the health of the skin and hair, thanks to its antioxidant content! [7]

There is a great deal of controversy about the use of this nectar, due to its high levels of fructose, as compared to regular table sugar. In small quantities, this natural sweetener can be safe to consume, but it should not become your constant sweetener choice.

Excessive consumption of fructose can lead to the following:

Some people also have allergies to this nectar, so caution should always be used. There are numerous alternative sweeteners that have fewer side effects to worry about, such as honey, stevia or dates. [8]

Rate this article
Average rating 3.5 out of 5.0 based on 10 user(s).
Read This Next:
Popular Articles