Anemia during pregnancy is a common condition and a worrisome one. Therefore, understanding the details of anemia, its causes, symptoms and potential treatments is important.

What is Anemia During Pregnancy?

Anemia is a condition that can affect anyone and is defined as a deficiency in iron, an essential mineral in our body. Anemia during pregnancy is a common affliction of pregnant women, due to many physical and hormonal changes that occur during pregnancy.

Any deficiency in nutrients can be fatal and leaves your body without the key resources it needs, but this can be a dangerous concern during pregnancy. Iron is an essential mineral in the production of red blood cells and hemoglobin, which is necessary to carry oxygen and other nutrients to different areas of the body. Expecting mothers contribute a large amount of their nutrient intake to their growing fetus, which makes it even more important for them to ensure that their nutrient levels are adequate. [1]

Unlike traditional anemia, which can affect anyone during pregnancy, it is risky, especially during the first and the third trimester. 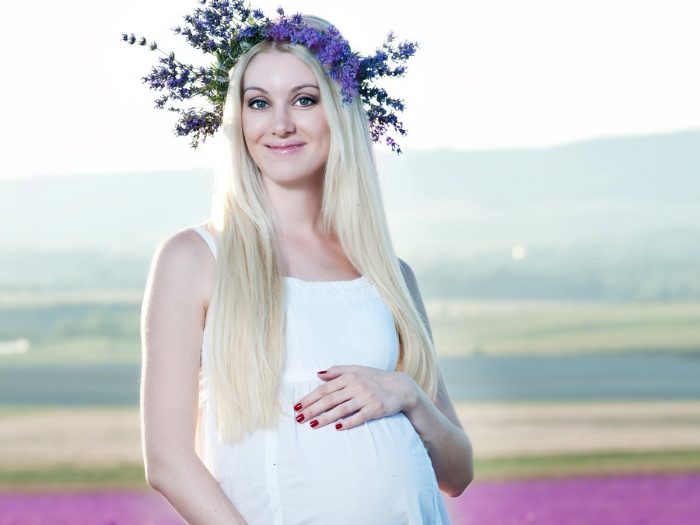 During the Third Trimester

In the third trimester, the final three months of a pregnancy term, there is a particular risk of anemia. Even if you aren’t anemic at the start of your pregnancy, the chances of being anemic get high by the end of your term. Approximately 15-20% of women experience anemia during pregnancy. Having anemia during the third trimester can increase the risk of a pre-term baby or a low birth weight of the baby. [2]

Having anemia during your late pregnancy term will also increase the risk of fetal anemia, which is rare, but extremely dangerous, and can even lead to heart failure or death of the fetus.

The causes of anemia during pregnancy include loss of blood, natural fetal development, poor diet and pre-existing chronic disease.

Loss of Blood: If you suffer from heavy menstruation or have a bleeding disorder, you are at a much higher risk of anemia during pregnancy. This basic loss of blood will require the body to produce more hemoglobin and red blood cells, putting a strain on your iron reserves. [3]

Fetal Development: As the fetus grows within the womb, it will require its own supply of blood, independent of the mother. This is a large sink for iron intake, and is the primary reason for anemia during pregnancy, albeit an unavoidable one.

Unique Pregnancy: For women who have recently had a pregnancy, or if you are carrying multiples (twins, triplets, etc.), the risk of anemia during pregnancy is considerably high. [4]

Poor Diet: The main source of iron in your body comes from dietary choices. A diet that is low in protein or high in sugars and fats can unbalance your nutrient levels, leading to anemia. [5]

Contrary to popular belief, anemia is not exclusively caused by a deficiency in iron. While a lack of iron causes 80-95% of anemia cases, deficiencies in other essential compounds can also result in anemic symptoms.

This is the most common form of anemia caused by a lack of iron in the body. It limits your body’s ability to produce hemoglobin and deliver oxygen to the necessary organ systems and tissues. [8]

Folic acid is a part of the B family of vitamins and is closely linked to metabolic processes and the risk of neural tube defects in a fetus. While rarer than iron-deficiency anemia, it still requires specialized treatment to bring folate concentration back to a healthy level. [9]

Pernicious anemia is a rare form of anemia in which your body attacks the cells in the stomach that are required to absorb vitamin B12. Without this essential vitamin, similar to a lack of iron, your body is unable to produce red blood cells. [10]

Some of the most common symptoms of anemia during pregnancy are fatigue, shortness of breath, irritability, dizziness, muscle weakness, preeclampsia, and irregular heartbeat, among others.

Exhaustion is one of the first and most notable symptoms of anemia, making you feel physically sluggish and cognitively slow.

The physical exhaustion caused by anemia and the lack of oxygen to organ systems can make normal respiration a struggle. This can also cause dizziness in some pregnancies. [13]

Tachycardia is a potentially life-threatening symptom of anemia during pregnancy, in which your heart “skips” beats. This can lead to more complicated cardiovascular issues during pregnancy. [14]

Given, how common it is for women to experience anemia during pregnancy, there are a number of formal treatments, as well as home remedies and natural therapies that can prevent or effectively treat this condition.

This is the easiest and most common recommendation for addressing anemia during pregnancy. Though iron supplements may increase the concentration of iron in the body, the greater issue may be an inability to absorb iron, which can be mitigated by vitamin C intake. [15]

Considered a preventative measure, more than a treatment option, prenatal vitamins can ensure that your iron levels remain adequate throughout pregnancy. [16]

Your dietary choices will have the largest impact on the amount of iron in your body. Within the boundaries of your pregnancy diet, add foods like spinach, red meat, legumes, high-starch foods, and dried fruit. [17]

Ascorbic acid is critical to iron absorption in the gut. By ensuring that you have proper levels of vitamin C, you can effectively avoid anemia during pregnancy. Include foods like citrus fruits, leafy green vegetables and bell peppers in your diet for better results. [18]

Rate this article
Average rating 4.6 out of 5.0 based on 5 user(s).
Read This Next:
Popular Articles