How Much Apple Cider Vinegar Is Good For Weight Loss

Battling the scale is not everyone’s idea of a good time. While nutritionists and doctors insist on maintaining a balance between a healthy diet and exercise, people are mostly on the lookout for shortcuts. Perhaps that is why it doesn’t come as a surprise to know that apple cider vinegar (ACV) weight loss diet comes up as one of the highest search results on the internet. Check out our detailed article on the apple cider vinegar diet here. But how much ACV should we consume for weight loss? How can you add it to your diet? Let us find out. [1]

How Much Apple Cider Vinegar To Consume For Weight Loss?

Apple cider vinegar is made by cutting and crushing apples and then mixing them with yeast to turn their sugar into alcohol. This alcohol is then further fermented to convert into acetic acid. Also known as ethanoic acid, apple cider vinegar is known for its distinct sour taste and strong odor. It is known to aid in the weight loss process. But here are a few things you need to remember to know how much of it should you have daily to get effective results. 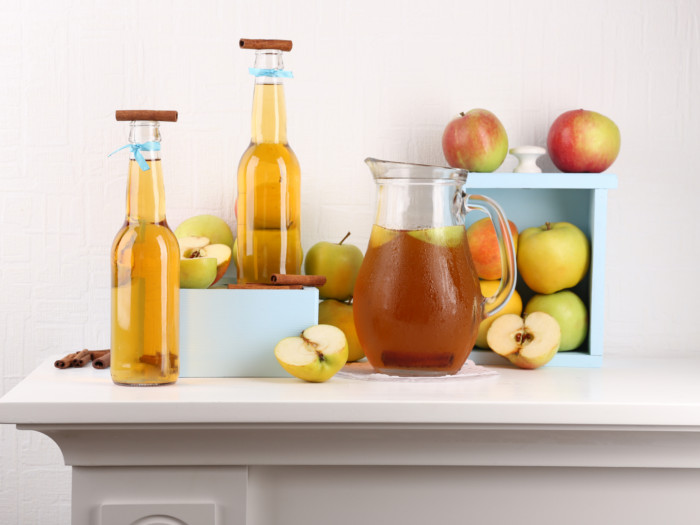 Apple cider vinegar must be diluted in water and consumed to avoid any side effects. Photo Credit: Shutterstock

Does Having Apple Cider Vinegar Alone Help In The Weight Loss Process?

Consuming apple cider vinegar alone will not ensure weight loss. It has to be accompanied by a restricted diet. A 2018 study published in the Journal of Functional Foods revealed that people who watched their calories and additionally had apple cider vinegar lost more weight and fat than people who did not take the ACV. Thirty-nine people were divided into two groups — one that was asked to follow a restricted diet along with apple cider vinegar and one that was asked to follow the diet without ACV. It was noticed that the people belonging to the former group experienced a reduction in body weight, body mass index (BMI), visceral fat, waist circumference, total cholesterol, and plasma triglycerides, more than the people belonging to the second group. This experiment was carried on for a period of 12 weeks. [3]

Daily consumption of this vinegar can also help keep a person feeling full for a longer period of time which will eventually result in a lower intake of calories. A small study comprising 11 people, published in the Journal of the American Dietetic Association, showed that those who consumed vinegar along with a carbohydrate-rich diet had a 55% lower blood sugar response even after an hour of eating. Furthermore, it was observed that these people reduced their consumption by 200–275 calories during the day. However, additional research is required to ascertain its consistent and sustainable effectiveness across a diverse group of people over a longer period of time. [5]

How Can You Add Apple Cider Vinegar To Your Diet?

Here are a few ways in which you can add apple cider vinegar to your daily diet.

Word of caution: Taking more than the aforementioned recommended dose is inadvisable as it could lead to some potential side effects that include erosion of tooth enamel, throat burns, some unpleasant digestive symptoms, low potassium level, and bone loss among other things. [7] [8] [9] [10]