What is Green Banana Flour & Its Uses

When one talks about bananas, the first thing that comes to mind is a delicious banana pudding or a yummy banana shake. While it has been famously used in drinks, shakes, and smoothies, the recent exploration into the new area of gluten-free flours has brought to light our very own and old green banana flour. It has many health and environmental benefits, as well as uses. Let’s take a look below.

What is Banana Flour?

Banana flour, prepared with green bananas has long been in use in Africa. The recent popularity of banana flour is mostly because of its gluten-free nature and resistant starch property. It has also been a popular part of various diets such as the paleo diet and other health trends that support a shift in flour choices from wheat to newer gluten-free options. Banana flour has a mild banana flavor, when uncooked, while the cooked version of this flour develops an earthy and even milder flavor. The texture resembles that of lighter wheat flour. It is also a good source of energy, proteins, carbohydrates, and fiber, as per the USDA Nutrition Database.

You cannot prepare this flour at home. However, the process to make banana flour involves peeling, chopping, and grinding of green bananas. The process is either done by hand, as per the traditional method or with a mechanical grinder. For the traditional method, the bananas are dried in the sun or an oven and then ground in a mortar and pestle. It takes around ten kilograms of green bananas to produce around one kilogram of this flour.

Banana flour production has also led to a minimization in waste generated by banana crops, as per researchers. The leftover or unripe banans cannot be consumed and are often just thrown away in the waste. When it comes to making banana flour, these unripe or leftover bananas can be utilized. This directly helps in waste reduction and also promotes higher returns for cultivators. 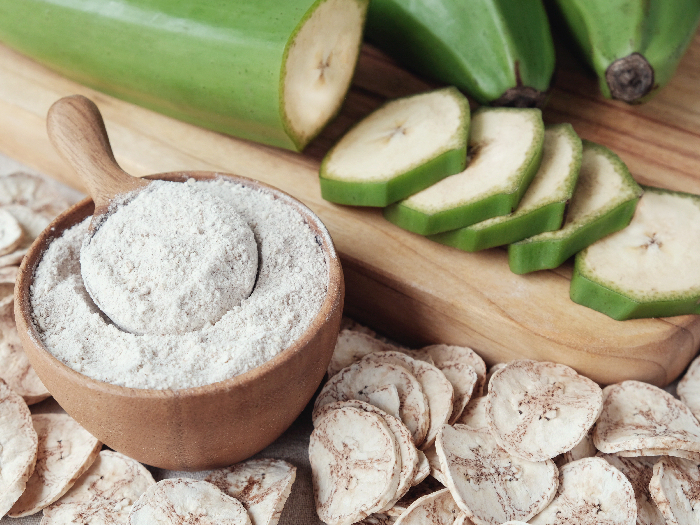 There are many health benefits of banana flour, these include the following.

Historically, banana flour has been used to replace the expensive wheat and rye flour. It was mainly produced in different parts of Africa and exported to Central America and Australia. There are many uses of this flour, such as baking, cooking and more. Let’s take a look below.

You can also use this flour for smoothies, sauces, stews, waffles, crepes, muffins, and cookies.

There are no health concerns associated with the consumption of banana flour. However, those who are allergic to bananas should avoid it. It should also be noted that banana flour production has often been linked to the exploitation of underprivileged workers, so make sure you get it from a reliable and ethical source. You can buy from brands that have agreed to fair trade and ethical business practices.