Berberine is a bioactive compound found in a number of plants of the Berberis genus and it can be extracted to provide a wide range of health benefits.

Berberine is a type of alkaloid, a powerful compound made of carbon and nitrogen, found in a variety of plants grown around the world, such as goldenseal, tree turmeric, goldthread, Oregon grape, and European barberry, among others. These plants are from the Berberis genus and are different types of evergreen shrubs.

Throughout history, berberine-containing plants have been prized in a number of traditional medicine practices, including Chinese traditional medicine, and were also often used for their bright yellow color as a natural dye. Berberine can be extracted from the roots, stems, and leaves of many plants, and has become a popular supplement, due to its proven health benefits. While some of the claims regarding this substance are anecdotal, there are a number of studies that support its efficacy as an alternative treatment for various conditions. [1] 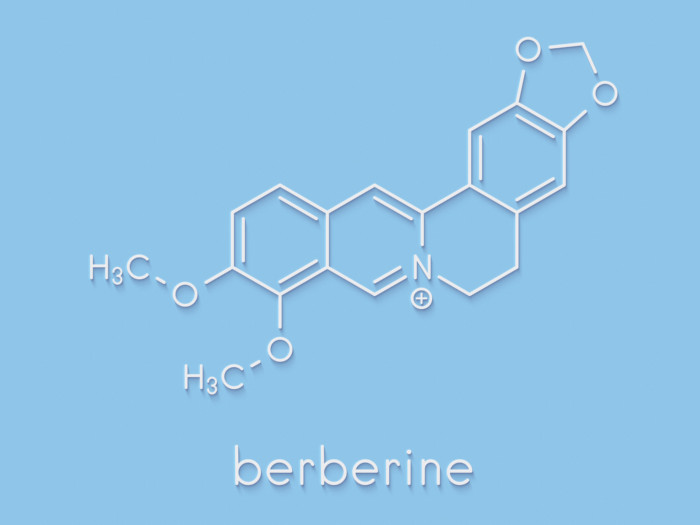 One of the physiological effects of berberine on the body is improved metabolic regulation. Berberine is able to activate a critical enzyme in the body known as AMP-activated protein kinase, which significantly affects the metabolic rate and our metabolic efficiency. It can also affect fat-regulating molecules, such as insulin and leptin, which can help to prevent weight gain, and burn fate more effectively. A study published in Evidence-Based Complementary and Alternative Medicine found that berberine improves insulin sensitivity by inhibiting fat storage, which can help to prevent obesity. [2]

Research has proven that berberine can improve glucose metabolism, which will lower high blood sugar levels. Diabetes is the result of sustained levels of high blood sugar, typically caused by insulin resistance or a lack of insulin. For those people who have Type 2 diabetes and are required to regularly take medication to regulate their blood sugar levels, the use of berberine can both increase glycolysis (the breakdown of glucose) and lower insulin resistance, according to a study published in the journal Metabolism: Clinical and Experimental. Furthermore, berberine can be used in conjunction with other blood sugar-lowering medications (provided you speak with your doctor), but it has also been shown to be equally effective as common pharmaceutical prescriptions. [3]

Aside from the effects that this alkaloid supplement can have on diabetes and weight gain, it is also linked to improved immune resistance, better heart health, and improved symptoms of depression, among others.

When adults use this supplement either orally or in a topical application, there is little risk of harm, although some people report gastrointestinal side effects when taken regularly. Pregnant and breastfeeding women should avoid the use of berberine, as the effects of this substance can be passed through the placenta or directly to your infant. Berberine’s effects on the liver can potentially be dangerous for infants and young children.

Furthermore, the depressive effects of berberine on both blood sugar and blood pressure can be good for people who are trying to control diabetes and hypertension, provided there aren’t negative interactions with other medications doing the same thing within the body. It is important to moderate your blood sugar and blood pressure, as having them drop too far can also be dangerous.

There are a number of supplements that include berberine, in doses ranging from 500-1500 milligrams per day. Depending on your health conditions, there are different recommendations for dosage, but this basic range is generally considered safe for everyone. Long-term supplementation may be appropriate for those with diabetes or metabolic issues, while treatment for gastrointestinal issues, depression or inflammation may only require temporary supplementation. [11]

If you are already being treated for other health conditions, or are taking prescribed medication, speak with your doctor before adding this supplement to your daily regimen. While there are limited reports of negative interactions or side effects linked to berberine, being careful in this respect is of the utmost importance, always.