Eating black sesame seeds is an easy way to receive many health benefits, and these versatile seeds can be added to your diet in a variety of surprising ways.

What are Black Sesame Seeds?

Black sesame seeds are some of the most common varieties of sesame seeds. Sesame refers to a number of flowering plants that are native to Africa and India, all of which are members of the scientific genus Sesamum. Sesame seeds are the mature, dried seeds from this flower. One of the oldest food crops, people have been eating black sesame seeds for thousands of years. The seeds are small and have a high oil content as per a study conducted by Christophe Blecker, Ph.D., University of Liege. These seeds are used extensively in cuisines around the world, often put in or on bread, made into tahini, used to coat sushi, or pressed for the flavorful oil. [1]

Black sesame seeds are reliably available in most supermarkets and groceries around the world. This nutritious seed is easy to eat – besides the uses outlined above, it can also be added as the following: 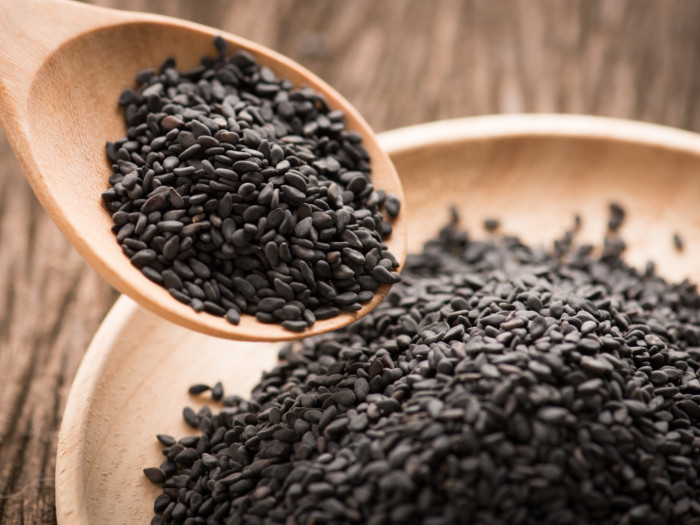 Black sesame seeds contain many nutrients, including calcium, phosphorus, iron, and magnesium. It also has a high percentage of protein and dietary fiber, which can help with everything from energy levels to digestion.

The fiber in these seeds is of a type known as lignans. Fibers in this group have been found to reduce overall cholesterol levels. Black sesame seeds also contain phytosterols, another plant-based compound that helps to lower cholesterol.

The same lignans and phytosterols that help with cholesterol are also potential cancer-fighters. In addition, sesamin, another compound found in sesame in good concentrations, helps to keep the liver functioning well, which in turn makes it easier for the body to cleanse itself as per a research conducted by Dana S. Wall, Department of Biochemistry, Memorial University of Newfoundland, Canada. [2]

The oil in black sesame seeds can alleviate constipation, and the fiber can promote regularity, as it bulks up the stool and stimulates peristaltic motion in the gut. Sesame seeds may also be helpful at fighting indigestion.

Some of the nutrients in black sesame seeds may boost the body’s production of melanin, which contributes to natural hair coloring, helping you look younger for longer!

Word of Caution: It should be noted that a small percentage of the population may be allergic to sesame seeds in a way that is similar to other seed and nut allergies. Ask a professional before beginning the use of any supplement, and discuss your health goals for such a change with your doctor.

Rate this article
Average rating 4.0 out of 5.0 based on 43 user(s).
Read This Next:
Popular Articles