Following the BRAT diet (Bland diet) is a fast way to settle an upset stomach and avoid making it any worse, but there are some potential side effects or concerns with this dietary approach.

What is the BRAT Diet?

The BRAT diet consists of eating foods that are easy to digest and work to prevent diarrhea, with the core of these foods being bananas, rice, applesauce, and toast (B-R-A-T). These foods are low in insoluble fiber and are therefore easy for the gut to process and metabolize, but they are high in soluble fiber, which can bulk up the stool and make it easier to pass out as bowel movements. If you have ever experienced a stomach bug, or can’t seem to stop running to the bathroom with diarrhea, the dietary approach of bland, simple foods is probably something you’ve done before. [1]

While this diet was once recommended widely, both for children and adults, it has somewhat fallen out of favor, since it can lead to a deficiency in essential nutrients, including fats and proteins, as well as key minerals and vitamins. By simplifying the food that you’re consuming, you can relieve strain on your gut, but it might not be the healthiest approach. There are other ways to soothe the stomach such as restrictive and bland diet. [2] 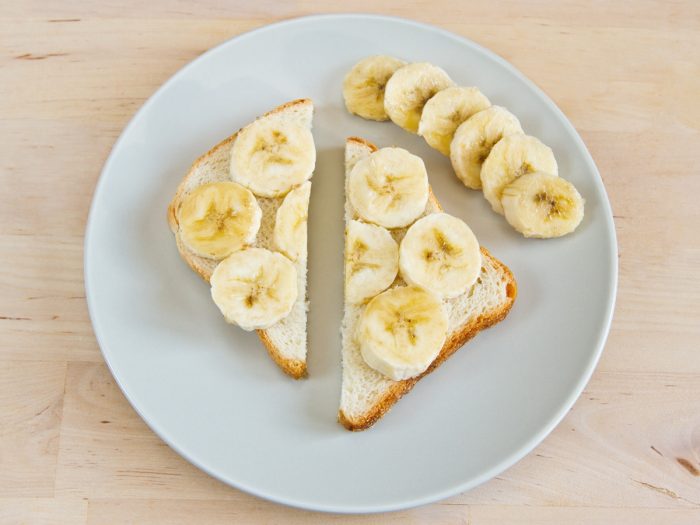 Bananas on toast can be eaten as part of the BRAT diet. Photo Credit: Shutterstock

Health Benefits of the BRAT Diet

There are some health benefits of going on the BRAT diet, such as the following:

When you are experiencing a bad case of the stomach flu, or can’t seem to keep any food down, your body will be missing out on many of the potential nutrients in your food. Irritable bowel syndrome (IBS) is also a problem that affects many people around the world, but this diet has proven to be anti-inflammatory and can relieve some of the worst symptoms. [3]

Foods Included in the BRAT Diet

Although the letters in BRAT diet stand for bananas, rice, applesauce, and toast, there are other foods allowed in the diet, such as crackers, cooked cereal, apple juice, flat soda, weak tea, various broths, and boiled potatoes. Generally speaking, these foods are composed of simple carbohydrates and high levels of soluble fiber, as well as anti-inflammatory compounds and nutrients. Most of these common foods can be easily digested and are not considered inflammatory in any way. [4]

This isn’t a difficult diet to follow in terms of structure, but it is important to time it properly. After you begin experiencing symptoms of diarrhea, nausea, and vomiting, it is best to forego eating for at least 6 hours. Following this, replenishing fluids with water, sports drinks, and other electrolytes is important.

As mentioned above, strictly following a BRAT diet for an extended period of time will result in deficiencies in protein, fat, and other key nutrients. Some of the other alternatives on a BRAT diet include:

Foods that are high in probiotics, prebiotics, and vitamin C are also important elements in a recovery diet, even if they don’t strictly fit in the BRAT diet. The point of this diet is to reduce or eliminate your symptoms, but you don’t want to compromise other aspects of your health in the process. [6]

Word of Caution: When following this diet, it is important not to rush too quickly into eating too much food. Even if all of the foods are on the approved list of foods, it can still cause your gastrointestinal symptoms to return. You want to flush your system with liquids before adding foods back in. [7]

Furthermore, staying on the BRAT diet for more than a week at a time can cause malnutrition issues, so remember that this is a remedy, not a long-term or lifestyle diet.