Brown Rice Vs White Rice: Which Is Healthier

Rice is one of the most preferred cereals in the world and it comes in different colors, sizes, and shapes – prominent among which are the white and brown varieties. It is said that white rice is created out of its brown counterpart through a milling process that discards the husk, bran, and germ portions of the cereal. While this may help extend the shelf life of white rice and even alter its taste, a lot of its nutrients are lost in the bargain, making it the less nutritious alternative among the two. But what are the other factors that make them different from one another? Let us find out.

Irrespective of its variety, rice as a cereal is mostly all carbs with zero fats and very little protein. Brown rice is a whole grain, which means that it contains all the nutrition that its paler version lacks – the fibrous and coarse bran, the wholesome germ, and the carbohydrate-laden endosperm, thus making it the more nutritious alternative. Some of its easy-to-spot differences are as follows. [1] 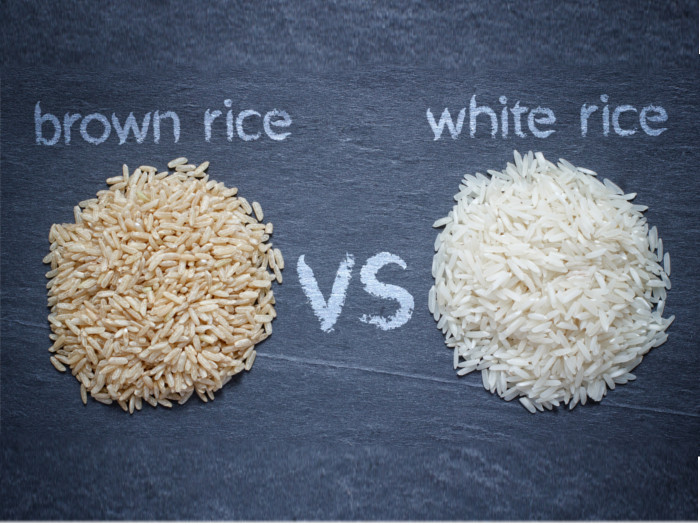 According to the USDA FoodData Central, brown rice is a rich source of essential minerals such as iron, zinc, manganese, calcium, selenium, magnesium, phosphorus, and potassium. It also contains important vitamins like B-vitamins – vitamin B1 (thiamine), B2 (riboflavin), B3 (niacin), B6, folate – vitamin E, and vitamin K. The nutrient profile of white rice is more or less the same, albeit with a few differences. Both are healthy sources of carbohydrates, protein, and essential fatty acids. While they both have fiber, brown rice is more fibrous than white rice, which automatically makes it the healthier cereal out of the two. White rice has more carbs and calories than brown rice, which is why the latter is preferred in a weight-loss diet over the former. [2] [3]

Carbs in white rice: A 100 gm serving of white rice contains around 28.17 gm of carbs

Brown rice calories:  A 100 gm serving of this rice contains around 123 calories.

Let us look at some of the top nutritional differences in detail below that will help us understand which is the healthier alternative out of the two.

Generally, brown rice contains 1-3 grams more fiber than its white counterpart. According to research published in the Metabolism Journal, a high-fiber diet not only relieves constipation but also keeps you feeling full for a long time, manages the body weight, controls blood sugar levels, maintains a healthy gut, and lessens the risk of cardiovascular diseases. [4] [5]

Brown and white rice, both, have a high glycemic index (GI) score when compared to other cereals like sorghum, the different varieties of millets, barley, and the like. The GI determines the impact your food has on your blood sugar levels. You can ascertain it based on the pace or intensity with which it can raise your blood sugar levels. If you have to compare the two, white rice definitely has a higher GI of the two and instantly gets absorbed in the bloodstream. According to a report by Harvard Medical School, white rice has a high GI of 72 as compared to brown rice that has a moderate GI of 50. [6]

Brown rice contains more magnesium than white rice. A 100 gram serving of brown rice contains 39 mg of magnesium compared to 12 mg of the same in an equivalent portion of white rice. According to the National Institute of Health, nearly 11 percent of your daily prescribed amount of magnesium is obtained out of half a cup of cooked brown rice. A diet rich in magnesium helps in maintaining good bone health, controlling blood sugar levels, boosting immunity, regulating the blood pressure, and improving muscle and nerve functions among other things. [7] [8]

This is one nutrient that is more in white rice than its brown equivalent. A 100 gram serving of white rice contains 58 micrograms of folate whereas the same amount of brown rice contains 9 micrograms of the same. This essential nutrient is very important when it comes to producing DNA and other genetic components. Additionally, it is extremely important for pregnant women or those who plan to get pregnant in the near future. It also helps in the cell division process. [9]

White rice has slightly more selenium than brown rice. When it comes to thyroid hormone production, selenium plays a vital role. Along with vitamin E, it may also help to protect the cells in the body from cancer. It also acts as an important immunomodulator. [10]

Rice, whether brown or white, may be contaminated with arsenic, a heavy metal that is naturally present in the environment. Long-term consumption of the same could result in heart diseases, cancer, or even type-2 diabetes. As per some research studies, brown rice is said to have a higher arsenic content compared to white rice as the former is not processed. That is why it is recommended to wash the rice thoroughly before consuming it. [11] [12]

Rice, and especially brown rice, is also said to contain an antinutrient known as phytic acid or phytate. According to a study published in Molecular Nutrition and Food Research, consuming phytic acid in the long run with most meals results in mineral deficiencies. However, this problem too can be addressed by thoroughly washing and cooking rice with clean water. [13]

Brown Rice vs White Rice: Which is Healthier?

Generally speaking, brown rice is considered to be more nutritious than white rice. It is rich in dietary fiber, magnesium and can definitely retain most of its nutrients as it isn’t processed. It has a lesser GI score, carbs, and calories compared to white rice, which makes it its best substitute and the ideal food for weight loss, diabetes management, and maintaining a healthy heart. White rice, on the other hand, is rich in folate. However, rice may contain some antinutrients such as arsenic, which may cause serious health problems if not washed properly with clean water before consumption. Having said that, both have their own advantages and disadvantages and can be a part of a wholesome diet when properly cleaned and consumed in moderation.