Some of the most important health benefits of Buddha’s hand include its ability to reduce pain, soothe gastrointestinal distress, boost the immune system, reduce inflammation, ease menstrual issues, lower blood pressure, and clear up respiratory illness.

This unusually named fruit may not be something you’ve heard about, and considering that its range is quite limited and the amount of fruit that can be consumed from each one is somewhat small, that doesn’t come as a surprise. With the scientific name of Citrus medica var. sarcodactylis, this variety of citron (like pomelos and mandarins) is named as such because the fruit is separated into long, thin sections that resemble the fingers of a human hand. Native to India or China, as most citron varieties are, Buddha’s hand has long been used in religious ceremonies, possibly due to the importance of Buddha’s open hand to the Buddhist faith. However, this fruit is also used for perfumes, given its sweet, citrusy smell, and can also be consumed for its medicinal properties. [1] [2]

It has very little juice and typically no seeds, and a bittersweet pulp, so common consumption hasn’t become widespread, and its distribution is still somewhat limited. It majorly grows in the temperate areas of China and India. Both the rind and the fruit itself can be used for various medicinal effects, so let’s take a closer look at the health benefits of Buddha’s hand. 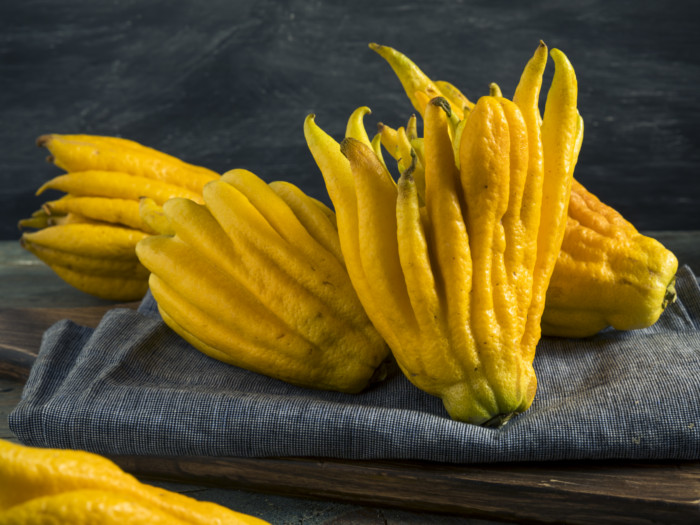 For thousands of years, Buddha’s hand has been turned to for pain relief, namely due to the chemical composition of the fruit, which includes coumarin, limonin, and diosmin. In combination with its anti-inflammatory capacity, Buddha’s hand is able to relieve swelling and pain caused by everything from injuries and surgeries to simple bangs and bruises, and was often believed to speed up wound healing and discoloration of bruises. [3]

One of the most common uses of Buddha’s hand is for respiratory conditions. Buddha’s hand acts as an expectorant, so if you’re suffering from excessive coughing that produces phlegm or catarrh, then consuming Buddha’s hand can be a quick and painless remedy. Soaking the fruit in a bowl with water and sugar can make this even more effective before consuming the fruit. [4]

If you’re suffering from a upset stomach, diarrhea, cramping, bloating or constipation, Buddha’s hand can provide an effective remedy that eases inflammation in the stomach lining and soothes the intestinal muscles so that digestion and excretion can occur normally. [5]

For women who suffer from unusually strong menstrual periods, in terms of cramps, bleeding, and mood swings, Buddha’s hand has long been trusted as a natural remedy. The anti-inflammatory nature of the fruit, combined with some of its other antioxidant qualities, make for a perfect solution if you’re facing this uncomfortable problem.

A specific polysaccharide found in Buddha’s hand is specifically linked to stimulating marcrophage activity and boosting the speed and efficacy of the immune system. Although this is seen as more of a preventative measure to keep your immune system strong, Buddha’s hand should also be eaten when suffering from the cold or flu, as it can significantly speed up your recovery time. [6]

Alcohol extract from Buddha’s hand actually behaves like a vasodilator, relaxing and dilating coronary blood vessels and increasing circulation, effectively lowering blood pressure and reducing the chances of developing atherosclerosis or suffering from a heart attack or stroke. This significantly lowers the strain on the cardiovascular system and promotes a long-term healthy lifestyle. [7]

Word of Caution: Despite the many benefits derived from the fruit, some of these are still in the process of being scientifically verified, although thousands of years of use should be some indication of its efficacy. However, you should always discuss with your doctor any plans to add a foreign fruit to your diet, particularly one as potent as Buddha’s hand. If you have low blood pressure, lowering it further with Buddha’s hand may not be a wise choice.

Rate this article
Average rating 3.7 out of 5.0 based on 33 user(s).
Read This Next:
Popular Articles