Burdock oil is an extremely useful and healthy medicinal tool that has been in use for generations. However, before you add any new herbal remedy to your regimen, it is best to understand what it contains, as well as the potential benefits and risks.

What is Burdock Oil?

Burdock oil is a very powerful oil derived from the roots and leaves of the burdock plant, which comprises a number of species within the Arctium genus. Once the oil is extracted from the plant, it can be used for a number of medicinal applications. While every part of the plant is used in some way, the oil is perhaps the most sought after, particularly due to its potential as a cosmetic. [1]

Burdock oil is a highly concentrated source of various tannins, flavonoids, and phytosterols. It has moderate levels of vitamin A, B vitamins, vitamin E, iron, zinc, magnesium, potassium and “good” fats. While burdock root can sometimes be orally consumed as a food, burdock oil is primarily used in topical, non-ingested forms. There are some medical treatments that include the consumption of small amounts of this oil, but this should be done very carefully, and under the strict guidance of a trained medical professional. 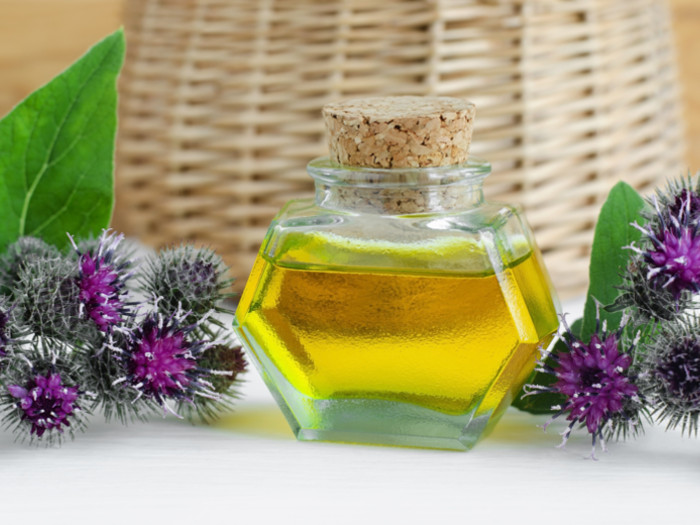 The most important health benefits of burdock oil relate to its ability to boost skin and hair quality, speed up healing, reduce inflammation, and promote weight loss, among others.

One of the most important uses of burdock oil is, it is packed with healthy fats, vitamin E and a variety of antioxidants. It can be topically applied to the skin to exfoliate, remove the signs of wrinkles and prevent premature aging. [2]

Having a hair wash with burdock oil can help to improve the sheen and luster of your hair while clearing up inflammation on the scalp and boosting follicle health. [3]

If you topically apply this oil to acute injuries, inflamed joints, and sore muscles, it can quickly reduce swelling and soothe the pain.

Throughout traditional medicine, the burdock root and its various derivatives have been used as a remedy for various conditions including cancer. According to the Memorial Sloan Kettering Cancer Center, burdock is indicated to have anticancer potential. However, this needs to be substantiated with further clinical studies. An animal study published in the journal Cancer Letters also found arctiin to have positive effects on pancreatic, colon, and breast carcinogenesis. [4]

Research has found that the concentrated minerals and antioxidants found in burdock oil not only speeds the healing process at the site of a wound but can also protect against infection during the healing period. [6]

Slows the Progression of Respiratory Issues

You can add some of this oil to a diffuser or other aromatherapy device and benefit from the anti-inflammatory and soothing nature of this potent oil. It can clear up congestion, reduce a sore throat, and lessen sinus pressure. [7]

The uses of burdock oil include its application as a hair wash, an exfoliant, a poultice, or as an ingredient in other medicinal or cosmetic products. Most of these applications can be prepared at home and can also be purchased at natural health stores. As mentioned above, other parts of the plant are used in different forms, but the concentrated extract should be used carefully. [8]

Despite the benefits of burdock oil, there are some potential side effects when it is used improperly or excessively, including fluctuating blood sugar, skin allergies, and complications in pregnancy. Some people are allergic to burdock oil and will experience redness, irritation or swelling when first exposed to it. Furthermore, in rare instances when taken internally, it can cause fluctuation in blood sugar, which is dangerous for diabetic patients. Pregnant women should avoid burdock oil due to the powerful effects it can have on the body as well as the lack of research on the specific impact it can have. [9]

How to Make Burdock Oil?

If you want to make this oil at home, all you need is a bit of patience, olive oil, and some burdock root.

Rate this article
Average rating 4.2 out of 5.0 based on 32 user(s).
Read This Next:
Popular Articles