Being pregnant can be very tiring, but caffeine during pregnancy can make for a dangerous complication that can put both the mother and baby at risk. However, caffeine is not strictly forbidden during pregnancy, so it is important to understand the facts of caffeine consumption, as well as the amount you can drink and possible risks you incur. When it comes to pregnancy, you should always take as much care as possible, and not alter your dietary guidelines from what has been prescribed by your doctor.

Should You Have Caffeine During Pregnancy?

It seems only natural to have a cup of coffee when you’ve only had a few hours of sleep; being pregnant can result in a wonderfully exciting, but uncomfortable, nine months, which may impact your physical and mental energy levels. People often start off their day with a large cup of piping-hot coffee, but that sort of dependence can be dangerous during pregnancy. However, pregnant women can limit their caffeine consumption to 200 mg a day. [1]

Remember that caffeine is a stimulant, meaning that it will increase energy levels, as well as your metabolism, which can increase your heart rate and blood pressure. While mild exercise is encouraged in pregnant women, it is still important to remain in control of these vitals, to reduce any stress on the baby. Caffeine is also a diuretic, which can further impact blood pressure, fluid balance, urination frequency and hydration levels. [2] 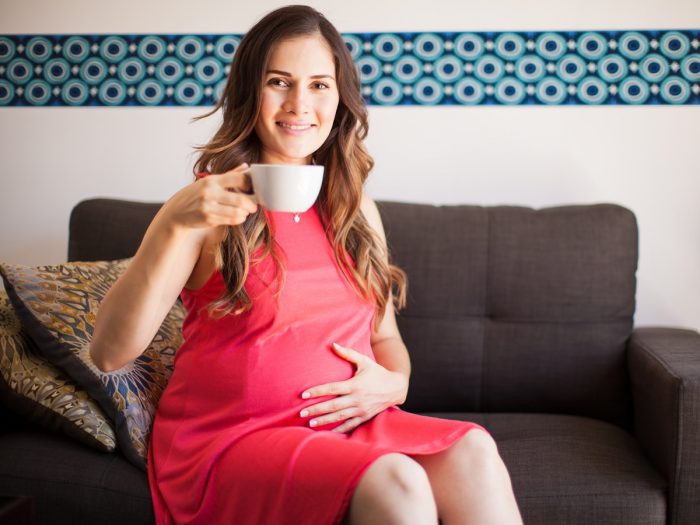 As per the NIH, if you’re pregnant, limit the amount of caffeine you have to 200 milligrams (mg) a day. Photo Credit: Shutterstock

The reason this is such a hotly debated topic during pregnancy is that there have been numerous conflicting studies on the subject. The discussions include some that find no correlation between pregnancy complications, and others that have a clear link between excessive caffeine consumption and conditions like low birth weight, premature birth, and developmental problems. In answer to the question of should you have caffeine during pregnancy, the answer is yes, you are allowed to have caffeine in small quantities, but if possible, it is better to avoid this stimulant chemical altogether. [3]

How Caffeine During Pregnancy Affects You & Your Baby?

There are a number of ways that caffeine during pregnancy can affect both you and your child. As mentioned above, caffeine is a stimulant and diuretic, which can have effects that put additional strain on the body. Pregnancy changes your body chemistry and hormone levels dramatically, and adding caffeine on top of that can be very dangerous.

Most worryingly of all, caffeine can be passed to the developing fetus. All of the nutrients that the baby takes in comes from the mother, and caffeine can act as a stimulant for the infant as well.  This could come in the form of inadequate rest and sleep, excessive activity or movement in the womb, or even more serious side effects, such as developmental disorders. A pregnant woman needs an uninterrupted sleep, but high caffeine levels in the body can affect the sleep quality. [4]

There are those who claim that all caffeine intake is dangerous during pregnancy, but this hasn’t been proven with any explicit research findings. The body is able to safely process caffeine during pregnancy, provided you consume it in moderation. [5]

Although this is more of an effect on you than on your potential baby, some research has found that excessive caffeine consumption can slow the rate of fertility and lead to delayed pregnancy. If you and your partner are trying to get pregnant, one of the best ways to improve your chances is to scale back your caffeine intake. This should also make it easier to give up caffeine once you find out that you’re pregnant.

How much Caffeine is safe during Pregnancy?

There is quite a bit of contention over how much caffeine during pregnancy is considered safe, but a generally agreed upon level is 150-200 mg of caffeine per day. That is approximately the size of one medium-sized cup of coffee. For some people, that single cup of coffee is enough to sustain them, or at least get them going, to tackle the demands of the day. For other women, shifting the caffeine consumption down to a manageable level or even less may take a bit more effort. [6]

What also complicates things is that coffee isn’t the only source of caffeine in a person’s diet, although it does make up the majority of caffeine consumption in many parts of the world. Tea is also relatively high in caffeine and is often drunk continuously throughout the day in many countries. Generally speaking, nothing more than 3 cups of green tea are recommended per day. [7]

As for diet soda drinks, which are notoriously addictive, no more than 4 cans should be consumed per day. Furthermore, if soda is your main source of caffeine for the day, be sure to avoid high-sugar and high-sodium varieties, as they can also have negative effects on your pregnancy.

There are a number of surprising foods and drinks that contain caffeine, so if you are pregnant, remember to be aware of all potential sources, not just your morning brew. Some foods you come across on a normal day that include caffeine are:

Throughout the course of the day, these caffeine-packed snacks may help you maintain a normal energy level. On a safer side, try altering your diet instead, with complex carbohydrates or healthy fats, which can also keep you feeling awake and engaged. While chocolate bars and cans of diet soda may seem like a small amount of caffeine, one or two of each throughout the day is equal to more than a single cup of coffee. [8]

You can speak with your doctor about how to tweak your diet to be caffeine-free, while also preventing you from feeling lethargic or fatigued during pregnancy.