Caffeine In Tea And Coffee: Which Is Healthier

The caffeine in tea and coffee is often the reason why we enjoy those beverages, but it is also important to understand and be aware of your caffeine intake since there can be negative side effects if you consume too much.

Is There Caffeine in Tea?

Yes, there are varying amounts of caffeine in different types of tea, but the concentration can differ significantly. However, all brewed tea will contain some level of caffeine, since the Camellia sinensis plant from which tea comes contains caffeine in the leaves. There are decaffeinated tea options, for those people who are sensitive to this powerful compound, or for those who are trying to eliminate it completely from their diet. [1] 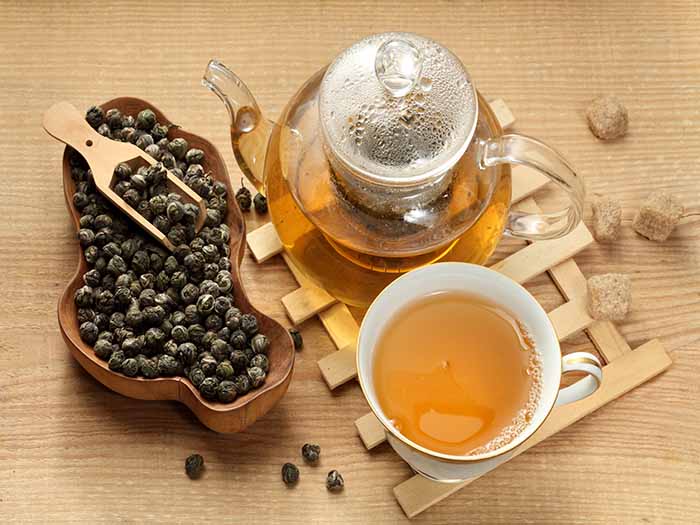 The caffeine content in tea varies from tea to tea. Photo Credit: Shutterstock

Depending on the type of tea you’re drinking, there will be different amounts of caffeine, primarily based on the length of time that the leaves are prepared to steep, and how the leaves were treated or dried before being used in a brew. These numbers are based on an 8-ounce cup. [2]

Although there are significantly fewer types of coffee than types of tea, there can still be some variation in the caffeine content, both in the preparation of coffee and in the cultivation of the coffee beans. Some coffee beans will undergo more or less roasting, changing the density of the beans and thus affecting the caffeine impact per scoop of ground coffee. [3]

Which is Healthier – Tea or Coffee?

With a decent amount of caffeine, this beverage is popularly used as a stimulant for the system to increase energy levels and motivation. It can also kickstart the metabolism and improve energy usage. Caffeine can reduce inflammation in blood vessels, which can aid in both respiratory functions and in the prevention of headaches or migraines. The benefits of coffee primarily come from its caffeine content, so when consumed in excess, there can be side effects in the nervous system, including anxiety, and gastrointestinal distress. [4]

Tea, on the other hand, offers a similar energy boost as coffee, but contains less caffeine, making it harder to drink enough to suffer caffeine side effects. Tea is also well known to have many different antioxidants and active ingredients that improve overall health, such as polyphenolic compounds, catechins, and flavonols. These additional nutrients make tea a healthier and more impactful beverage. [5]

Rate this article
Average rating 3.9 out of 5.0 based on 16 user(s).
Read This Next:
Popular Articles