The combination of cannabis and coconut oil is able to help relieve pain, fight cancer, improve the immune system, boost cognition, and reduce inflammation. It also helps increase metabolism, and protect heart health. This oil can be used in a wide variety of recipes and can be used in the form of cannabinoid edibles and topicals, in places where cannabis has been legalized.

Cannabis has a compound called THC-A, which converts to THC, a more powerful cannabinoid when it is heated. This THC is able to bond with fats, which is why creating cannabis butter is such a popular practice for those who use this substance. However, the fat content of coconut oil is much better than butter, allowing for a much more efficient binding with THC, and therefore a more potent cannabis oil. Adding to that the long list of coconut oil’s healthy properties, such as its ability to increase energy, boost metabolism, protect the heart, strengthen the immune system, and aid in weight loss, and you have a truly desirable oil with an impressive list of health benefits.

Cannabis has an unusual place in the medical world, because many of its healthy properties have been identified, and proven in medical studies, it is still considered illegal in many parts of the world, and is currently the subject of numerous legalization efforts around the world. However, in those places where it has been decriminalized or legalized entirely for medicinal or recreational purposes, it has already begun to prove its value.

Let us look at some of the health benefits of cannabis coconut oil in detail;

As per the USDA, coconut oil contains healthy fatty acids that can help lower your LDL or bad cholesterol levels in the body. THC is also known to lower blood pressure, making this combination an all-around boost for your cardiovascular health.

As per the book, “The Health Effects of Cannabis and Cannabinoids: The Current State of Evidence and Recommendations for Research“, one of the main applications for THC and cannabinoids is inflammation associated with arthritis, injuries, and other conditions within the body. Similarly, coconut oil has anti-inflammatory properties that help it soothe the stomach, and when topically applied, cannabis-infused coconut oil can help clear up irritation on the skin as well. 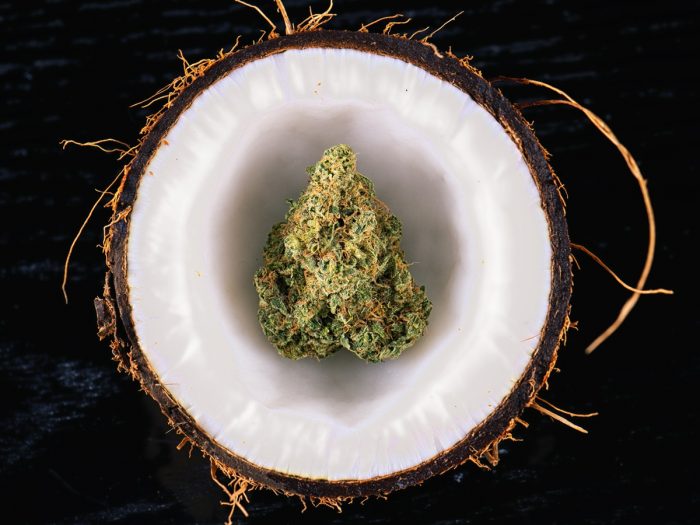 Coconut oil is able to stimulate the metabolism. Research has shown that energy expenditure is roughly 3-4% higher in those who regularly take coconut oil, which is equivalent to more than 100 calories every day!

A study conducted by the Oxford Brookes University suggests that coconut oil aids in weight loss as it has satiating properties so you do not overeat. Research has also suggested that the use of medical marijuana helps in controlling weight gain.

A pilot study on the effects of “Medical Cannabis Oil for Behavioral and Psychological Symptoms of Dementia” suggests that THC has long been associated with improving cognition, reducing oxidative stress in the brain, and even preventing the onset of dementia and Alzheimer’s disease. Combined with coconut oil’s antioxidant properties, this can be a powerful boost to your brain.

One of the most exciting developments regarding cannabis oil is its potential effect on cancer prevention. THC and other cannabinoids are being researched heavily in terms of their effect on the spread of cancer, as well as for pain treatment.

As mentioned in a recent research study, THC is considered an extremely effective painkiller with very few side effects, unlike pharmaceuticals and morphine-derived pills. Coconut oil allows more THC to bind to the fat cells, making the cannabis oil more powerful and better able to function as an analgesic.

The constituents in coconut oil can help regulate hormones, due to the release of ketones in the liver. Similarly, THC is closely linked to a reduction in anxiety and stress, and can also help with sleep disorders and insomnia.

The uses for cannabis coconut oil are endless.

Basically, anything that you would normally use cooking oil for in your cooking can be switched out for cannabis-infused coconut oil.

However, it is important to remember that pure THC can be very powerful, and will give you the same effects as smoking marijuana. While adding this oil to your life can be hugely beneficial, as the list above shows, it is also a drug with mind-altering effects.

You should never operate heavy machinery or drive a car while you are under the influence of cannabis. It is also essential that you create a cannabis coconut oil that is safe to consume, so it must be in the proper ratios. Following a strict recipe is highly recommended, particularly if you are making cannabis coconut oil for the first time.

Cannabis coconut oil capsules are very popular for people who want a discrete way to ingest cannabis oil and benefit from the effect, rather than smoking cannabis or eating an edible. After following the recipe for cannabis coconut oil, you need a few extra components, namely a syringe and fillable gel capsules. If you want to fill the capsules immediately after making the oil, then it is important to let the mixture cool enough to be handled and not melt the capsules. However, the syringe will only work if the oil is fully liquefied, and not beginning to harden.

Simply suck up a small amount of the oil and fill each of the gel capsules, ensuring that the seal is tight. At that point, simply place the capsules in the refrigerator or any other dark and cool place. The newly infused oil will harden in the capsules, providing you with a perfect dose of healthy cannabis-infused coconut oil whenever you need a lift!

Use of cannabis and its products is banned/restricted by some countries such as UAE, Dubai, and Saudi Arabia so consult your local health specialist before use.