Benefits & Side Effects of Chaga Tea

Chaga tea is an exotic and unusual tea variety, but it offers many impressive health benefits when prepared correctly.

What is Chaga Tea?

Chaga tea is a form of mushroom tea, more specifically, one that is brewed with a fungus scientifically known as Inonotus Obliquus. This type of mushroom grows primarily on birch trees in areas of cold climates, and while it is non-toxic, the black exterior and positioning on trees often make people think that it is a sickness of the tree. This fungus can survive on living trees without doing much damage, and it can also be harvested. When this hard black outer shell is broken up, the interior is brown and yellow and soft like other mushroom varieties. [1]

Brewing a tea from these mushrooms can be done either in pre-packaged bags or by grinding up whole chunks of the substance. The taste has a surprisingly sweet quality to it, most likely due to the presence of vanillin, which gives it a similar taste to vanilla.

There are several impressive health benefits to Chaga tea, including its effects on obesity, blood sugar, and cardiovascular health, among others.

There is a good amount of unique antioxidants in Chaga mushrooms, including superoxide dismutase, which is known to help the body fight off the effects of free radicals. Animal studies suggest that Chaga may have anticancer effects however, human studies are required to confirm the same. [2] [3] 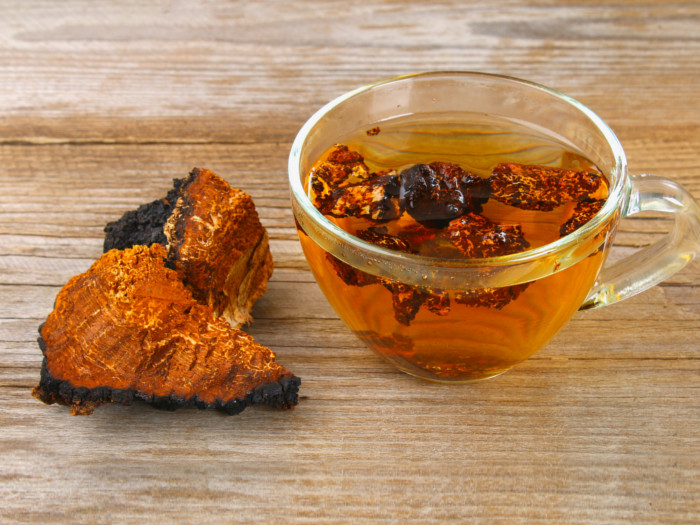 This tea can have a massive impact on the immune system and is considered an immunomodulator. It also has clear antiviral, antibacterial, and anti-inflammatory properties, making it an ideal choice to drink when your body needs some extra protection. [4]

With seven different antioxidants and a variety of nutrients and active ingredients, this tea can protect blood vessels and arteries, lower blood pressure, and reduce your risk of heart attack and stroke. [5]

Studies have found that Chaga tea is able to help manage blood sugar levels, which is good for those living with diabetes or at risk of developing this condition. But despite its benefits, the tea should be consumed in moderation. [6]

Drinking too much Chaga tea can have some unwanted side effects, including a dangerously low blood sugar level and an increased risk of bleeding. These effects on the blood can be beneficial when the tea is consumed in moderation, but some people are more sensitive than others. Begin by drinking a small amount and gauging your body’s reaction.

Rate this article
Average rating 4.2 out of 5.0 based on 22 user(s).
Read This Next:
Popular Articles