People have been using chaga mushrooms for their antioxidant benefits for thousands of years, and they are still widely used by natural health practitioners.

Chaga mushrooms are parasitic fungi that infect and grow on various trees, including birch, but can also be used for their many antioxidants. These mushrooms are scientifically known as Inonotus obliquus,  [1]and can often be seen in temperate areas of the Northern hemisphere, including Russia, Europe, and the Americas. At first glance, these mushrooms look like a large, knobby, black piece of charcoal on the side of a tree. This outer growth can be removed and gently processed to produce a powder, which can then be used for various medicinal purposes.

Chaga mushrooms are not the fruiting bodies of the fungi, which is the case for most foods in the mushroom category. The fruiting body grows within the heartwood of the tree; the part of this fungus that is removed and used is a large mass of mycelium and has its distinctive color due to its high concentration of melanin. Nutritionally speaking, these mushrooms aren’t overly impressive, with small amounts of protein, a moderate amount of fiber, and no fats, carbohydrates, or sugars. However, when it comes to antioxidant concentration, this mushroom has one of the highest ORAC (Oxygen Radical Absorbent Capacity) scores of any food. [2] 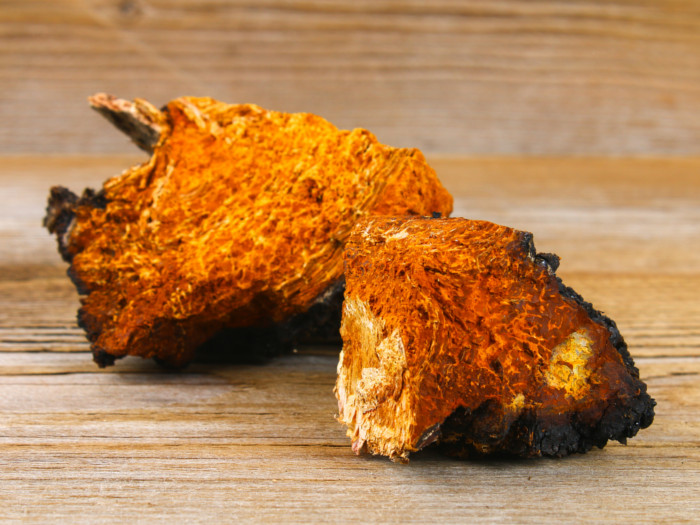 The most impressive benefits of these mushrooms include their ability to help prevent cancer, protect the immune system, improving physical endurance, lowering cholesterol, and suppress inflammation, among many others.

Chaga mushroom has long been used in cancer therapies. In vitro studies show that chaga mushrooms have been able to arrest the growth of cancer cells and therefore, they can be used as anticancer ingredients in the diet. [3] [4] [5]

Studies have found that regular use of chaga mushrooms can help boost energy levels and reduce lactic acid levels in the blood, resulting in greater physical endurance.

Drinking this tea or using the tincture can give your immune system a major boost as the herbal drink has antiviral and antimicrobial effects. It can protect against common pathogens as well as the general inflammation that can lead to chronic disease. [6]

Many ulcers start to form as the result of an infection, and this fungus is known to boost the immune protection of the gut, helping to mitigate or prevent the symptoms of ulcers. [7]

Research has found that the antioxidants found in these fungi can lower LDL cholesterol (“bad” cholesterol) and reduce your risk of atherosclerosis and coronary heart disease. [8]

The relaxant properties of this tea are known to lower blood pressure and prevent excess strain on the cardiovascular system, which can further boost heart health. [9]

How to Use Chaga Mushroom?

If you want to add chaga mushrooms into your daily or weekly diet, you can enjoy chaga tea. However, some people also make more concentrated and powerful tinctures, using an alcohol extraction method. Using hot water or alcohol is known to allow the cellular walls to break down and release their wealth of antioxidants.

To make a more concentrated tincture, you can allow the mushrooms to steep for over an hour, or perform a simple alcohol extraction following the tea-making process. This second step will allow you to access some of the water-insoluble components, such as betulinic acid, a powerful antioxidant.

Despite the many obvious benefits of using this fungus for your health, side effects can include complications with pregnancy, diabetes, autoimmune diseases, and bleeding disorders.