The cherry tomato that you add to almost every salad has a more contentious history than you may realize. This cute little fruit has had multiple claimants and has traveled the world in its quest to be the salad topper. It is a story that features scientific endeavor, enterprising marketers, and even a nation’s effort to establish itself! Beyond the story, it is full of nutritional value. Eaten both raw and cooked, it is bursting with flavor.

These tomatoes are delicious, sweeter than the usual Roma tomatoes. They are full of nutritive value, including antioxidants like phenolic compounds and carotenoids.

What is a Cherry Tomato?

The ‘cherry’ in the cherry tomato is a reference for the size of this fruit. These are the smallest among different types of tomatoes. Mostly found red in color, you can also get yellow, orange, and golden cherry tomatoes. They have a sweet concentrated flavor that is delicious both cooked and raw. Interestingly, the first cultivated tomatoes were cherry-sized, though not as widespread in use. The larger tomatoes made their mark in the culinary world, fast becoming one of the most popular fruits worldwide, often mistaken as a vegetable. The cherry-sized version made its mark much later in the story. 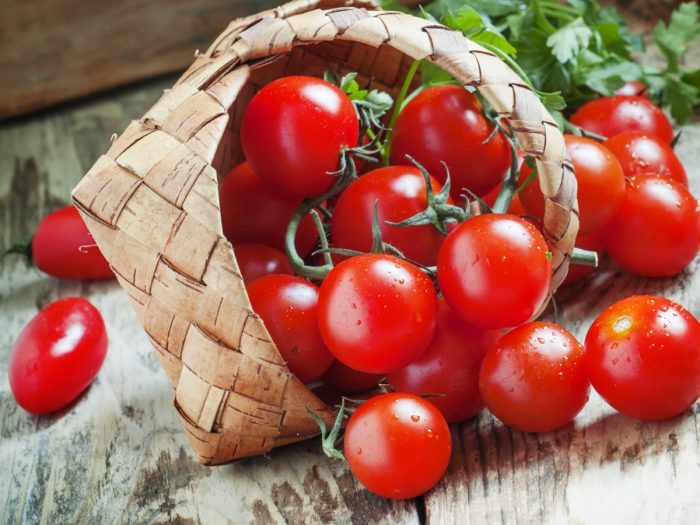 Add cherry tomatoes to salads or cook them with your pasta or meat. Photo Credit: Shutterstock

The larger tomatoes dominated supermarket aisles till even two decades ago, till suddenly, we started seeing these perfectly cheerful smaller versions. What seemed exotic bite-sized treat was so popular that it soon became a family staple across the Western world. And therein lies the interesting history of the cherry tomatoes. The Smithsonian magazine termed its origin a ‘contentious’ history. Gastropod, a podcast on ‘science and history’ of food explored its ‘invention’. [1] [2]

Its very origins have been a matter of debate. It first appeared in an encyclopedia published in 1623 named Pinax Theatri Botanici. Many trace its origins to South America where tomatoes come from. Since then there have been other claimants. The Santorini cherry tomatoes or Tomataki santorinis was accorded a Protected Designation of Origin by the EU, which makes them unique to the location, just like champagne is to the French countryside of the same name. [3] [4]

But a more serious claim was made by Israel, which for a decade maintained that it had invented the cherry tomato. In fact, at one point it was linked to this fledgling nation’s self-image. The ‘invention’ of the tomato was meant to build the nation’s identity and improve its image worldwide, claimed an article in the journal Gastronomica. Turns out, that this is actually half-right. While they may not have invented it, the Israelis were part of the globalization and marketing of the cherry tomato. [5]

It was, of course, pure commerce that led to its popularity. In the 1970s the British chain Marks & Spencer were looking for tomatoes that would be supermarket-aisle friendly and still taste good. They reached out to local growers and Israeli scientists for the most shelf-stable variety. And voila, a star was born. It soon traveled across the pond and became just as popular. The evolution of the cherry tomato does not end here. Importantly, cultivators, farmers, and scientists are still working across the globe to refine this juicy little bite.

Cherry tomatoes are rich in nutritive value. As per the USDA, 100 gm or half a cup of cherry tomato (branded) in tomato puree contains : [6]

Cherry tomatoes are also rich in antioxidants, mainly carotenoids, phenolic compounds, ascorbic acid, and alpha-tocopherol. To get its full benefits, always make sure that the tomatoes are fully ripe. A study published in the Journal of Agriculture and Food Chemistry found that these tomatoes showed the highest level of carotenoids and antioxidant activity when harvested at full ripeness. Do make sure to avoid the over-ripe ones though. The antioxidant activity also seems to significantly decline in later stages of ripeness. [7]

There is more to the cherry tomato than a salad. It is delicious, whether cooked, roasted, grilled, or eaten raw. Here are just a few ideas on what you can do with a packet of these tomatoes:

Burst cherry tomatoes with pasta: Saute the tomatoes with a bit of garlic in olive oil till they burst and the juices mingle in a silky sauce. Serve with pasta and parmesan. You can switch it up with any noodles and a dash of chili oil.

Traybake with chicken/fish and basil: Keep the tomatoes on the vine and arrange on a baking tin with basil, and chicken breasts or fish. Drizzle over some olive oil, add seasoning of your choice, and bake it in the oven. Dinner’s a matter of minutes!

Tomato tart: This is a delicious tart bursting with flavor. On a tart base, add in cherry tomatoes tossed in olive oil, basil, and mozzarella cheese. Include different-colored cherry tomatoes if you can find them. This is best made when tomatoes are in season.

Pizza topping: Pile them on a pizza base along with cheese and any other topping of your choice.

Seafood stew: Let the cherry tomatoes simmer in a pot with seasoning and add the seafood. There are endless variations you can get here by using different seasonings, from sambal to herbs like thyme.

Chickpea/lentil stew: We’ve been making chickpea or lentil stews with canned tomatoes. Now try substituting half the amount with cherry tomatoes. These little jewels are bursting in flavor when used in dense stews.

Grilled shrimp: Grill the tomatoes along with shrimp and other veggies of your choice. This simple refreshing salad packs a punch.

Frittata: The perfect supper, a frittata is a flexible dish that can take in any ingredient. Cherry tomatoes give the omelet a juicy flavor that goes perfectly with a dash of pepper.

Charred cherry tomatoes with lamb chops: Keep the tomatoes on the vine and grill them till the skin gets wrinkled and charred. Some would just start to burst. Toss them with a balsamic glaze and serve with juicy lamb chops.

Salads: Finally, we come to the salads. Cherry tomatoes are perfect when used in salads because they are sweeter and more flavorful than the bigger versions. The size of the tomato is also perfect. Cut in two, it makes for just the right-sized morsel. You can add it to almost any salad of your choice, whether it is a spring salad, a Panzanella, Nicoise, or a Caprese.

Tell us how you like to eat your cherry tomatoes, whether in a stew, with roast, in a salad, or just as they are. Drop us a comment below and share your recipe.