All You Should Know About Chinese Tea

Chinese tea is one of the world’s most beloved beverages. So potent was its lure that wars were fought to supply its demand. The root of the Opium Wars lay in its high demand in Britain. The Boston Tea Party was again an attempt by the Britishers to control its trade in the colonies. While other centers like India and Sri Lanka rose to meet the growing global demand, Chinese tea remains one of the most popular beverages worldwide.

What is Chinese Tea?

You will see plenty of teas labeled as ‘Chinese tea’ in supermarkets. However, the term Chinese tea is a misnomer. There is no singular Chinese tea. There are many types of Chinese tea, including, black, green, white, yellow, oolong, and dark. There are also scented and herbal teas. All of these are derived from the Camellia sinensis plant. The difference lies in the processing of the tea leaves. In China, tea is not just a drink to warm yourself on a cold day or a means of relaxation. It is a way of life with a history that intermingles with the nation’s history at various points.

In All the Tea in China, the author describes tea as one of China’s treasures. The Buddhist monks and Taoist philosophers who promoted the beverage probably were responsible for imbuing the art of drinking tea with a greater meaning, an almost meditative quality. The book quotes Lu Yu, who in his famous work on tea described it as “a haunting flavor, strange and lasting”. [1] 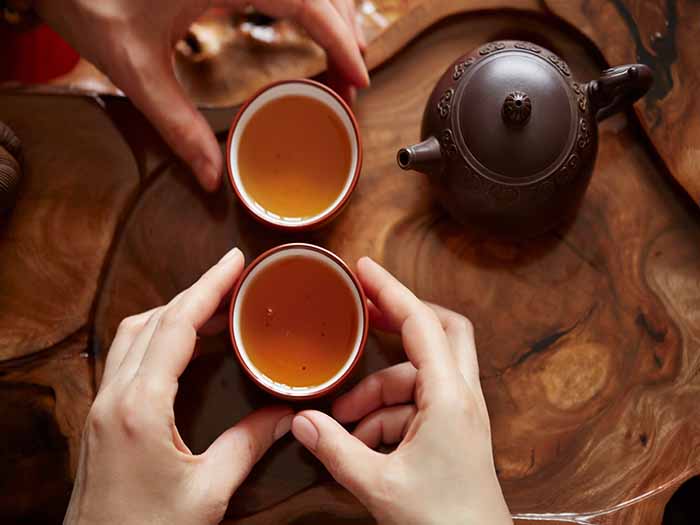 Tea is a way of life in China. Photo Credit: Shutterstock

China is the birthplace of tea and the beverage has always enjoyed a special place in its culture and trade. According to legend, tea was discovered in 2737 BC by Chinese Emperor Shen Nong. He found it accidentally when a leaf from a nearby shrub floated into the water. Chinese emperors have since given utmost importance to tea. They exercised tight control over the cultivation and manufacturing of tea.

Its popularity and importance continued to grow over the centuries. It was a critical part of their trade and grew to be part of an elitist culture and a mark of an intellectual. Part of China’s fascination with tea also gave rise to different ways of processing, from compressed to loose leaf. Many of the teas that we now see originated in China. So special was its position in the culture, that it was also used as a tribute.

Tea has been an integral part of China’s culture for millennia. Tea was considered one of the seven daily necessities, along with firewood, rice, salt, soy sauce, vinegar, and oil. It has inspired literature, poetry, songs, ballads, arts, and philosophy. It was used to pay tributes under the Ming dynasty, a practice that continued. Most Chinese cities would have teahouses. These were public places where people would gather to drink tea and socialize. In fact, the only other cultural parallel would be pubs or bars in the Western world, except teahouses were even more intrinsic to the Chinese culture. They also changed in character from one place to another, from the functional tea houses of Hangzhou to the Tianjin teahouses where one could listen to operas or stories.

Tea continues to occupy its importance in modern Chinese society. An average person drinks tea throughout the day, sometimes in place of water. The Chinese tea culture is distinct from the beverage’s consumption in any other place. While it is taken casually, there are also formal occasions where tea is served. It can be served for a specific and special reason, such as to apologize, honor, or show respect. Drinking tea is seen as both a social and intensely individual experience. It is seen as part of self-cultivation, a meditative practice.

What is a Chinese Tea Ceremony?

There are two main Chinese tea ceremonies, the wedding tea ceremony and the Gongfu tea ceremony. Both the ceremonies require the proper tea set. The wedding ceremony is one of the most important wedding rituals where the new bride and groom prepare the tea and serve their elders. The ceremony is meant to honor the elders and thank them.

The Gongfu tea ceremony, on the other hand, is a more meditative experience. It is an elaborate ceremony with a strict ritual. One must be aware of the ‘cha qi’ or tea energy and be aware of how it affects one’s body and mind. Careful attention is paid to every step of the brewing, focusing on the aroma and flavor of the tea. It is marked by an almost dance-like motion of the person making the tea. The Japanese tea ceremony may also have evolved from the Gongfu tea ceremony.

Chinese Teaware: An important part of the tea ceremony is the teaware. Given the cultural importance of tea and the prominence of tea ceremonies, the Chinese teaware developed independently. The unique tea sets are known for their beautiful workmanship and simple elegance. More elaborate than its Western counterpart, the Chinese tea set is also more redolent with a sense of history that is reflective of the beverage itself. In China, tea sets can be an heirloom piece, an exquisite piece of art that is preserved carefully.

Tea is brewed in a lidded bowl, then poured into a clay pitcher to ensure an even brew. The clay of the pitcher absorbs the tea and some old pitchers may not even need tea leaves for a brew. The absorbed tea in the hot pitcher is enough to flavor the hot liquid! Many families have special pitchers, passed on through generations with beautiful works of art.

The tea is poured from the pitcher on to scent cups where one can savor the fragrance of the tea. To serve, the tea is poured into cups. Smaller than usual cups, these are cradled in one’s palms. Made of porcelain, the cups, like the pitcher, are also often exquisite. All this is served on a special tea tray with a slatted top. The intricately carved trays are meant to drain out any spills. Other tools include a tea holder to hold the tea, tea tongs to handle the cups, tea brush to wipe spilled tea, tea needle to clean the teapot spout, and a little tea pet to be placed on the tray. 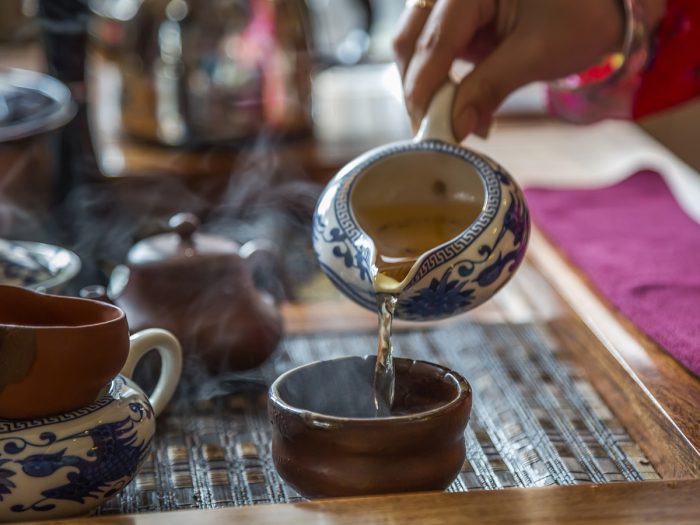 Chinese tea encompasses a very wide range of teas. In fact, every tea that we see today has originated from China. We can thank the Chinese love for tea and their experimentation with its processing for the many kinds of teas that we see today. The six main types of Chinese tea are: 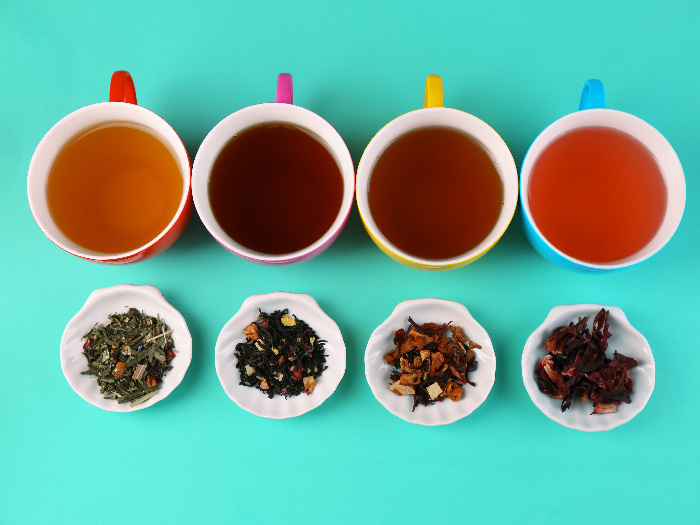 Apart from these basic teas, there are two other popular variations: