If you want to enjoy coconut flour benefits, choose this alternative to wheat flour next time you are at the grocery store!

What is a Coconut Flour

Coconut flour is the white inner flesh of the coconut that has been dried and processed into the meal. While the coconut is now grown all over the tropics, the tree originated in India and South Asia. It then migrated around the world, thanks to traders and ocean currents. Today it is one of the most widely used ingredients around the world, ranging from its use as a basic dried coconut to coconut water and coconut milk and oil.

Coconut flour is not flour by any traditional sense of the word, as it has no grains, and is popular with people suffering from nut allergies who cannot have alternative flours like almond. Recently, it has become well known once again thanks to the paleo diet, which excludes dairy and grain products, but coconut flesh has long been dried and used in traditional subtropical culinary traditions around the Southern hemisphere. 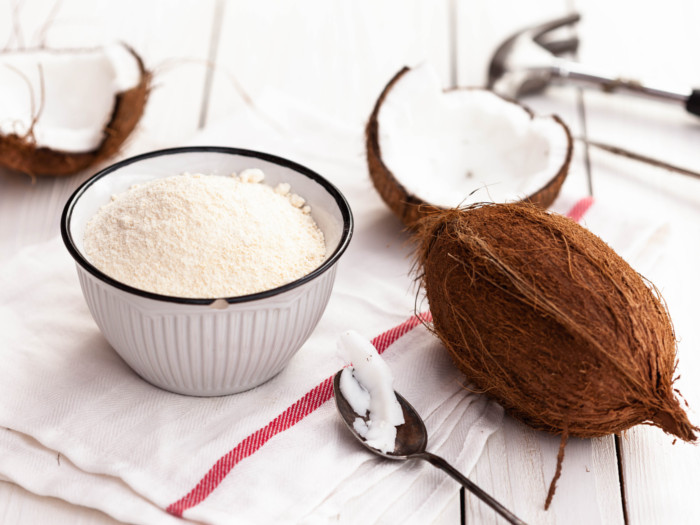 Coconut flour is naturally gluten-free and has become a favorite of modern consumers who are on gluten-free, dairy-free, or nut-free diets. Gluten is a protein found in wheat, barley, and rye products. 1 in 100 people worldwide is affected by gluten intolerance, or in serious cases, full-blown Celiac disease, where gluten digestion damages the small intestine. Even if you do not suffer when ingesting gluten, there is plenty of evidence to suggest that avoiding gluten in your diet may be beneficial. Not only does avoiding gluten help with weight management, but foods with gluten may also encourage inflammation and block nutrient absorption. [2]

Coconut has high levels of healthy saturated fats, nutrients that until recently had a negative reputation, while still low in polyunsaturated fats. However, recent medical research has recognized that not all fat is bad fat, and fat itself performs a number of very important functions in the body. Most of the fat in coconut flour consists of medium-chain triglycerides, [3] which are digested easily in your system, and have antiviral, antimicrobial and antifungal properties. They may also boost your metabolism. Lauric acid is a fatty acid found in foods with high saturated fat content. Lauric acid helps boost cardiovascular health, may prevent acne outbreaks, and inhibits [4] the growth of bacteria and viruses in the body. It also contributes to healthy skin and a strong immune system.

Coconut flour has the highest fiber content of commercially available flours, with 5 grams of this indigestible carbohydrate per tablespoon. Coconut flour is actually made up of 60% [5] fiber; 56% insoluble fiber and 4% soluble. High-fiber diets are not only good for digestive health and blood pressure, but they also lower “bad” LDL cholesterol levels and help manage weight loss by keeping you fuller for longer. Coconut flour also contains far more protein than whole wheat flour. Protein is an important building block of bones, muscles, and tissue.

Most grain flour has a compound called phytic acid in it. Phytic acid binds to minerals and stops them from being absorbed properly by your body. To avoid this, grains are usually soaked before they are used. However, coconut flour does not have any phytic acid and therefore does not interfere in mineral absorption. [6]

Because of its high levels of insoluble fiber, coconut flour also has a very low glycemic index. Adding coconut flour to baking can actually help prevent blood sugar spikes, and maybe a great diet addition for anyone managing or doing their best to prevent the onset of diabetes. According to a study published by the Cambridge University Press, conducted by Trinidad P. Trinidad et al., there is a strong negative correlation between coconut flour fiber levels and glycemic load on the body. [7]

When you begin experimenting with new flour, it is important to remember that it will not behave the same as wheat flour.

Word of Caution: Coconut flour is generally safe in any amount. People with coconut allergies should avoid using coconut flour. Coconut flour does contain saturated fats and may increase cholesterol in some people if used too often. As with any addition to your diet, use this flour in moderation.