You might not be aware of the difference between coconut oil vs coconut butter, but there are clear differences in the nutrient composition and potential uses for these two substances.

Coconut oil and coconut butter may come from the same source, but there are important differences to understand before using either of these for health or nutritional purposes.

Coconut oil is quite popular and is found around the world in various forms. Made by cold-pressing or extracting the oil directly from the flesh of the coconut, this oil is rich in fatty acids, primarily saturated fats. According to USDA, coconut oil provides essential nutrients like fatty acids, calcium, iron, zinc, vitamin E, and vitamin K. Many of those saturated fats are medium-chain triglycerides, also known as “good” cholesterol. There are approximately 120 calories in a single tablespoon of coconut oil. [1] [2]

Coconut oil has a slightly sweet taste and is commonly used as a cooking oil. It is a solid at room temperature but turns into a liquid at a relatively low heat. Coconut oil is also very well known for its potential health benefits, as it can stimulate the immune system, improve digestion, boost skin health, function as an antioxidant, strengthen the hair and eyelashes, and protect heart health. [3] 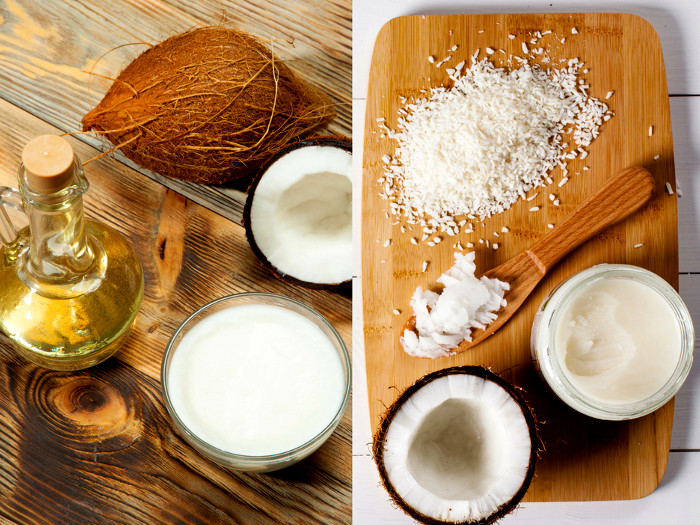 Coconut butter is not nearly as well known as coconut oil and is produced in a very different way. Rather than extracting the oil from the flesh of the coconut, coconut butter is produced by pureeing the meat, along with the oil, into a thick and creamy nut butter. Often referred to as the peanut butter of the tropics, this butter can be used as a spread, and is primarily used for culinary purposes. That being said, unlike coconut oil, it is not often used for stovetop cooking, as the butter burns rather easily. It has a stronger coconut flavor than coconut oil, as it contains all of the aromatic constituents. [4]

The nutrient profile of coconut butter is much more varied than coconut oil since it is composed of all the nutrients in the meat of the coconut. This means coconut butter has a high level of fiber, potassium, iron, magnesium, and protein, which is lacking in coconut oil. There are also roughly 120 calories per tablespoon of coconut butter, so in that respect, these two substances do have some similarities. The fatty acid content is lower in coconut butter, but it can still be used in some topical applications as a natural remedy. [5]

Rate this article
Average rating 3.7 out of 5.0 based on 8 user(s).
Read This Next:
Popular Articles