Coconut water provides various health benefits, including re-hydration, weight loss, a remedy for digestive system disorders and cholera, it is useful for intravenous hydration, as well as controlling hypertension, lowering cholesterol levels, and protecting the heart.

Coconut trees are considered wonder trees by mankind. Not only the fruit but the whole palm is reported to be very useful. Coconuts provide coconut water and the flesh inside the nut. The water and flesh supply us with essential nutrients that can keep our stomachs full and give us the energy to increase endurance. The scientific name of coconut is Cocos nucifera and it belongs to the Arecaceae or palm family. The fruit or the seed is technically known as a drupe, and it is not a nut, despite the name. [1]

Coconuts are thought to be native to the Indian Malay regions. By the beginning of the 15th century, coconuts entered Africa and slowly spread to Europe. The palm generally grows in tropical climates and today it is found in almost all the tropics in the Indian and Pacific Oceans, ranging from the Hawaiian islands, West Indies, Jamaica, Africa, India, Sri Lanka, Myanmar, Malaysia, Indonesia, Philippines, to Papua New Guinea.

There is evidence of coconuts being used in India over 3,000 years ago. In India, coconuts are regarded as one of the most sacred of fruits and they are offered to deities as tokens of gratitude. One of the names of coconut in Sanskrit is Kalpa-Vriksha meaning an “eternal tree” or “tree which fulfills all wishes”. That name has been given due to the fact that coconut palm is such a versatile tree and almost all parts of the tree can be put to beneficial use.

A coconut closely resembles a rugby ball with roughly three sides. The size is about 20 to 30 cm long. The drupe is covered with layers of fiber known as coir and the shell itself is very hard – almost water proof. Coconut water and the flesh develop inside. Coconut water and coconut flesh are not the only two types of food obtained from coconuts. Some of the byproducts of coconuts include mature coconut meat, coconut milk, coconut oil, coconut wine, coconut vinegar, and many more. [2] 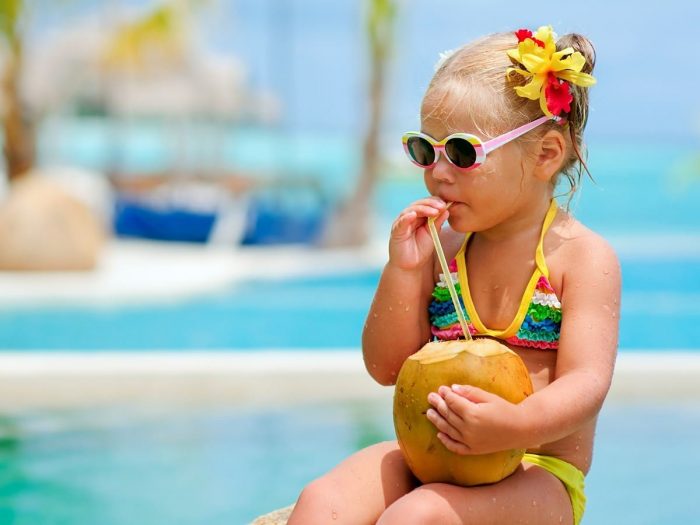 Some amazing health benefits of drinking coconut water include:

Coconut water is not just water. It is water filled with vitamins and minerals. Some of the minerals found in coconut water, such as potassium and sodium, act as electrolytes and help balance the water levels in our body. Having one or two glasses of coconut water after a long day in the sun can bring back lost minerals, vitamins, and energy in no time at all! [6]

Note: Only medical professionals are capable and experienced enough to administer this. Please do not try this at home.

Coconut water has been tested for its antimicrobial properties as well. It has been noted that coconut water contains biochemicals called peptides, which can kill both gram positive and gram negative bacteria. Thus, drinking coconut water can be very helpful in fighting infections. [9]

When suffering from cholera, tender coconut water can be very useful. Take two glasses of coconut water and mix it with 3-4 teaspoons of lime juice. This solution is known to bring back the electrolyte balance and should be regularly given to the patient. Coconut water, being a good source of potassium, can be an ideal solution for cholera. [10]

Coconut water is good for the heart. As coconut water controls cholesterol, the heart and aorta have lower cholesterol levels, resulting in a healthier heart and a reduced chance of strokes and heart attacks. Coconut water has a stimulating effect on enzymes, which helps in recovering from myocardial damages. [12]

One of the benefits of coconut water is the control of hypertension (high blood pressure). A comparative study of coconut water and mauby (a tree bark-based beverage popular in the Caribbean islands) showed that hypertensive patients given coconut water showed a more positive response than people treated with mauby. The daily intake of one or two glasses of tender coconut water can be beneficial in controlling hypertension. [13]

Tests on tender coconut water for its hepato-protective properties show that it is good for the liver. Coconut water provides antioxidants, which reduce the activity of many toxins in the liver. [14]

Coconut water has diuretic properties, which is very helpful in cases of urinary disorders. Due to the diuretic effect, water is easily expelled from the body, along with the toxins, helping to keep our bodily systems healthy. [15]

Research studies have suggested that young coconut water is beneficial for postmenopausal symptoms or hormone replacement therapy. Also, it has wound healing properties. [17]

Rate this article
Average rating 4.0 out of 5.0 based on 283 user(s).
Read This Next:
Popular Articles