How Does CoolSculpting Help You Lose Weight

When it comes to quick and effective ways to lose weight, CoolSculpting is the popular option people all over the world go for. With more than 4,000,000 procedures having already been performed, it is rapidly becoming a viable, quick and painless alternative for people who can’t seem to shed those pesky pockets of fat, regardless of how they alter their diet or exercise habits.

CoolSculpting is a non-invasive procedure that reduces fat deposits in the body with concentrated freezing techniques. Unlike other procedures to reduce fat in the body, CoolSculpting doesn’t require a risky surgery, relies on a relatively simple technology, and is practiced by responsible clinicians around the world. It is also one of the fastest, long-term solutions for fat deposits in the body, particularly those in areas that can be difficult to work out. [1] 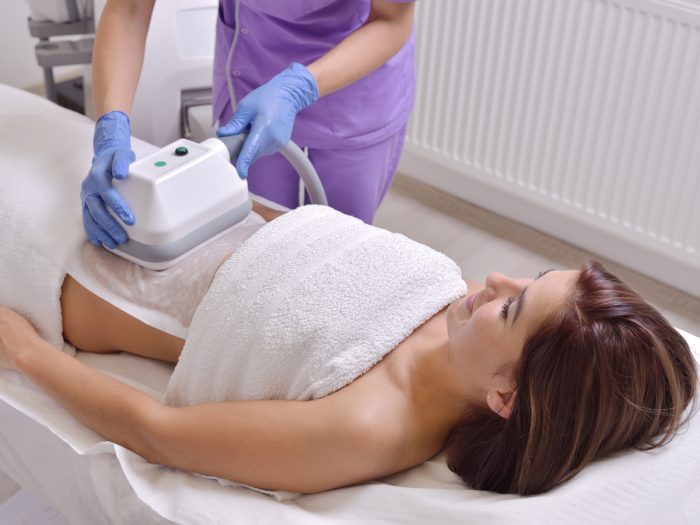 How does CoolSculpting Work?

The CoolSculpting process includes delivering concentrated cooling to specific areas of the body with excess fat deposits. This intense cold is designed to specifically freeze fat cells, while regular cells around them remain unaffected. Once these fat cells are frozen, they die, and the body’s liver can then eliminate them through natural processes, just as the body would eliminate any other dead cells. The tissue is lowered to a temperature of around 40 degrees, which is cold enough to kill fat cells, but it will leave nearby tissues and organ systems unharmed and fully functional.

The effects may take time to see, and multiple sessions are often required, specifically for larger deposits of fat. However, CoolSculpting is considered a long-term solution, as these fat cells are completely eliminated from the body, not shrunk or displaced to some other area.

The technical term for the procedure is cryolipolysis, and requires pinching a fold of fat into a layer before applying cold to the surface, effectively freezing the fat cells between those folds of skin. While the level of success will vary between patients, most people report a 25% reduction of fat in the treated area, with the full slimming effects may be visible after approximately three months. [2]

Some of the areas of the body are more receptive to this treatment than others, including the thighs, buttocks, stomach, love handles, arms, chin and areas where cellulite has begun to appear. You should speak with a trained physician about the areas where the treatment could help you most.

There are quite a few benefits to CoolSculpting, including the natural appearance of the treated body part, the safety of the procedure and the improvement in muscle tone, among others.

One of the biggest benefits of CoolSculpting is the lack of danger involved in the procedure. Even the most minimally invasive procedure comes with the risk of infection or possible complication. This is a short, simple and non-invasive procedure, patients can confidently undergo the procedure without worrying about whether or not they will come out of anesthesia! [3]

With other fat-elimination procedures, there may be a scar on the area that was treated, or irregular skin tone, discoloration, or excess skin left over that can be nearly impossible to completely eradicate. With CoolSculpting, the area of skin that is treated will look completely natural after the procedure’s effects are realized. With the exception of some potential and temporary bruising, it is impossible to tell that a procedure even occurred! [4]

By eliminating fat deposits just beneath the skin, you may be helping to expose muscle tone that you forgot was even there! This is particularly true for the belly, where much of the fat sits right on top of the abdominal muscles, but after CoolSculpting, these muscles can finally have a chance to be shown off. [5]

The increase in confidence from CoolSculpting is an incredible benefit, as self-conscious feelings about one’s body image are rampant in today’s society. You can boldly show off your beach body without being embarrassed by scars or other signs of recovery telling the world that you had “some work” done.

Many people choose CoolSculpting because it can be easily fit into the course of their day. The sessions are a minimum of 60 minutes and require no recovery time. Basically, you could visit a CoolSculpting clinic on your lunch break and be back in time for your afternoon meetings, without having to tell anyone about your procedure. [6]

One of the most popular areas for CoolSculpting is the stomach, particularly on those small potbellies or drooping areas of fat that seem almost impossible to tone or eliminate. Most people think that liposuction is one of the only options for removing belly fat. While it is quite safe and proven, it requires an invasive procedure, recovery time and the possibility of complications during the procedure. The FDA has approved CoolSculpting as a viable alternative to liposuction, giving people a reliable and safe option for finally ridding themselves of that pesky belly fat. [7]

How much does CoolSculpting Cost?

There are varying levels of costs for CoolSculpting, although the overall cost is significantly less than liposuction on the same areas of your body. There are also different size applicators, depending on the size of the area you want treated, and which part of the body you are addressing. Each CoolSculpting session lasts for a minimum of one hour, and for a small applicator, it will cost $750 per hour. There are also larger applicators that cost roughly $1,250 per hour.

Due to the efficacy of the treatment, most people don’t require more than one session per area of the body, so the average cost for all of the desired treatment areas will run between $3,000-$4,000. Compared to multi-location liposuction costs – upwards of $10,000 – CoolSculpting is not only a faster and more efficient process, but also a far less expensive one. Prices may vary depending on clinic, but these are average costs across the weight loss and body-sculpturing industry.

Given that this is a new and somewhat revolutionary technique, there are naturally a lot of questions asked by patients who think this procedure is simply too good to be true. The most common questions and answers are provided below.

Are there any Side Effects?

Are the Results Permanent?

The reason for CoolSculpting’s popularity is how long-lasting the results are. The biggest problem in most diets is the rapid weight gain after the strict rules of the diet are loosened. That isn’t the case with this procedure, as the cells are killed during the procedure and then slowly filtered out of the body. If you adopt a healthier diet – and don’t simply deposit new fat in old places, you can maintain the results from the procedure indefinitely. [9]

Am I a good Candidate for CoolSculpting?

Everyone is different, but most people are ideal for CoolSculpting treatments. For very obese individuals, this procedure isn’t recommended, as there are limitations to accessing fat, and the number of treatments that would be needed may make it prohibitively expensive. However, if you are a healthy person with a few pockets of fat that you can’t seem to eliminate with diet and exercise, you are an ideal candidate for this procedure.

Does the Procedure Hurt?

Most people report that the procedure is painless, although a slight stinging or pressure is often felt at the beginning of the treatment. For the remainder of the hour, the area is often numbed, and patients are encouraged to watch television or even take a nap to distract them from discomfort or pain.

How many Sessions will I Need?

The answer to this question will be different for everyone seeking out a CoolSculpting treatment. As mentioned, these treatments are often measured by the size of the area and the type of applicator that will be required. While some patients may only need a single one-hour session with the smallest applicator, others will need 5-6 two-hour treatments with different applicators; it all depends on your goals and desires from the treatment.

Do I Need to take Time off Work?

The best thing about CoolSculpting is the quickness of the recovery. For liposuction and other weight-reduction surgeries, the recovery time can be up to a week or more. This is generally followed by discomfort and a limited range of motion to avoid any internal tears or damage to stitches, etc. With CoolSculpting, you can be back to work the same day, with no outward signs of discomfort, aside from some light bruising or redness at the site, which will fade within a day or two. [10]

Rate this article
Average rating 4.4 out of 5.0 based on 6 user(s).
Read This Next:
Popular Articles