Home remedies for diabetes include the use of apple cider vinegar, bitter gourd, fenugreek, cinnamon, aloe vera, water, jamun, and flaxseed oil in different forms. Exercising, healthy sleep patterns, and maintaining oral health are other good behavioral remedies for getting rid of diabetes in a natural way.

Home remedies can offer a solution to all of your diabetes problems, despite not technically being a “cure”. You can try any or all of the following home remedies to start enjoying the benefits of a diabetes-free life.

Apple cider vinegar plays an important role in controlling the sugar levels in the blood. It also controls the blood glucose level, which rises noticeably right after you finish a meal. A randomized placebo-controlled trial published in the International Journal of Medical Research and Health Sciences (2019) showed that apple cider vinegar is effective in controlling diabetes and lowering the incidences of hypercholesterolemia and hypertriglyceridemia in patients with type 2 diabetes mellitus.

Acetic acid is the active component in apple cider vinegar which affects blood glucose metabolism and many other mechanisms that explain the anti glycemic effects of vinegar. As acetic acid may slow gastric emptying, it helps you to lose weight, which is important, considering obesity is one of the main drivers of diabetes. Take 10 ml of apple cider vinegar and mix it with 200 ml of water and consume it 20 minutes before lunch and dinner. Consuming apple cider vinegar at bedtime also helps in reducing the fasting blood sugar levels. 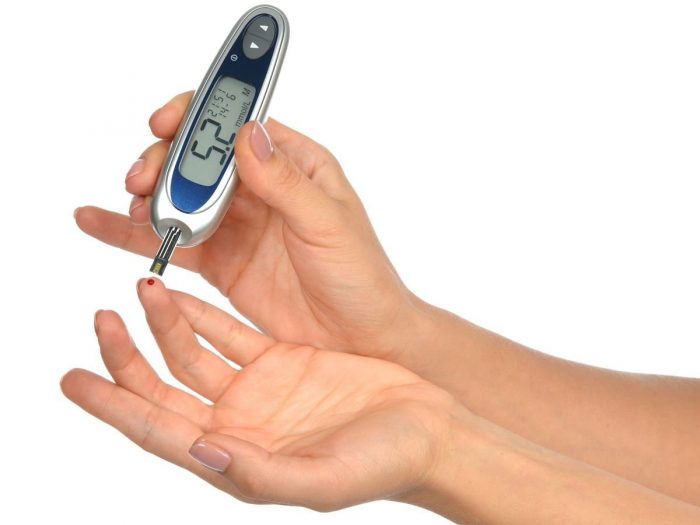 Diabetes cannot be cured but can be treated. Photo Credit: Shutterstock

People suffering from Type 2 diabetes may benefit from cinnamon as it boosts the insulin production process in the pancreas and lowers the sugar level. You can take cinnamon in several ways. Mix it with your tea or other drinks, add it to your salad dressing, or directly take it as a powder. However, many other factors such as dosage, BMI, race, type of drugs, and duration of taking cinnamon may influence diabetes treatment. Many studies have been reporting different results and the effect of cinnamon has been different in various populations. Future studies are warranted with regards to cinnamon at various doses and treatment duration. [1]

A proper intake of water helps to mobilize the fluids throughout your body and moves the excess sugar through your system so it can be taken in by the organs and cells to be used as a functional source of energy. Furthermore, water keeps the toxins and other foreign bodies in your body moving out and being flushed, which also includes excess sugars via urination.

As unusual as this may sound, one great remedy for diabetes is to get some sunlight in your life! Sunlight is directly linked to the functionality of vitamin D, and by rejuvenating this essential vitamin, sunlight can help improve the production of insulin. A proper supply of insulin can help those suffering from both types of diabetes mellitus. [2]

Ginger is one of the most widely consumed spices worldwide. It has a long history of being used as herbal medicine in the treatment of a variety of diseases such as nausea, vomiting, indigestion, and cold-induced syndromes. Ginger also possesses anti-cancer, anti-clotting, anti-inflammatory, and anti-oxidative characteristics. A variety of studies have shown the anti-diabetic activity of ginger. It is believed that gingerols- the major active component in ginger increase the uptake of glucose into muscle cells without utilizing insulin. Thus helping in the management of high blood sugar levels. [3] [4]

Psyllium Husk (Isabgol), ispaghula husk, the gel-forming (water-soluble) fiber has long been used in the treatment of constipation. The studies that have been conducted in the last two decades have also investigated whether ispaghula interferes with the intestinal absorption of carbohydrate in healthy volunteers and in both – type 1 and type 2 diabetic patients. The results in these studies, in general, have indicated that ispaghula administration yields a decrease in glycemia and insulinemia. [5]

A person suffering from type -2 diabetes mellitus may also experience a small reduction in fasting blood glucose and glycosylated hemoglobin levels (hba1c) levels by adding psyllium to their daily dietary intake. Consume 1tsp of psyllium husk with 2 glasses of water before lunch and dinner. [6]

A cereal that is rich in beta-glucans helps delay the absorption of glucose after a meal, reducing the rise of glucose and insulin. A diabetic can enjoy barely in any form – as a soup, porridge, or as simple as barley water. [7]

Aloe vera gel is a very powerful component in battling diabetes because it contains phytosterols. Early studies have shown phytosterol to have anti-hyperglycemic effects, and can seriously benefit people suffering from Type 2 diabetes. Some home remedies with aloe vera include a mixture of turmeric and bay leaves. Mix a teaspoon of all three with water and drink two times a day. This should lower your blood glucose levels! [8]

A recent study suggests that intake of high-salt diet increases the risk of cardiovascular diseases in diabetics so it is advisable to opt for a low salt diet. [9]

Bitter gourd is also known as bitter melon, and some of the effects of this fruit are known to reduce glucose levels. It stimulates the pancreas to release insulin, thereby counteracting the effects of excess glucose in the body. Bitter melon contains charantin, p- insulin, glycosides, vicine, karavilosides along with polypeptide –p, plant insulin. Charantin- rich extract has the ability to increase insulin sensitivity in type-2 diabetic patients. Remove the seeds from two or three bitter gourds, and extract the juice. Add water and then drink it on an empty stomach every morning. [10] [11]

This is one of the best options as a home remedy for diabetes. Fenugreek seeds have organic compounds that stimulate the pancreas into increasing its insulin output, thereby reducing the dangerous activities of glucose in the bloodstream of diabetics. Soak fenugreek seeds (approx. two tablespoons) in some water overnight. When you wake up, drink the water as well as the seeds. Chew it partially and then gulp it along with the water so that the fiber in it can exert its effect. Along with the organic compounds that help stimulate insulin, the fiber present in the fenugreek seeds also slows down the metabolism of starch into glucose, thereby helping diabetics. By adding nearly about 10g of fenugreek seeds into your daily diet along with good dietary management and exercise can lead to a synergistic effect on the fasting blood glucose and glycosylated hemoglobin (HbA1c) levels within six months of treatment. [12] [13]

If you find the taste of the fenugreek seeds bitter, you may choose to powder them and simply add them to the curries or vegetables you like!

Take at least 60 grams of ripe Jamun fruit and soak it in boiling water for several hours. Now make a mash with it and divide it into three equal parts. Take these separated parts at equally spread times of the day. Jamun is one of the most powerful home remedies for diabetes, as every part of this plant can have some sort of anti-diabetic effect. The seeds contain glycosides and alkaloids that control blood sugar levels. The anthocyanins, ellagic acid, and tannins are also considered to be powerful anti-diabetic agents. Jamun is a cost-effective fruit, hence it may serve to be beneficial in improving the biochemical parameters of diabetic patients in the rural population as well. [14] [15]

Take about 1.5oz of flaxseed oil and mix it with some cottage cheese and milk. Blend it well to make a fine mixture and eat it with fruits as regularly as possible. This is another very good home remedy for diabetes. [16]

Recent research suggests that a gluten-free diet may reduce the risk of type 1 diabetes. [18]

Regular exercise is a must for people that are suffering from diabetes. You need to keep at least half an hour for exercise every day. Joining a gym is another good option since it helps maintain the regularity and motivation. Exercise eliminates obesity and lowers blood sugar levels significantly, therefore reducing your chances of diabetes. The energy required for physical activity needs to have a source, and that will stimulate the uptake of simple sugars like glucose from your bloodstream into your muscle tissues and cells, thereby doing the same job as insulin, while you lose weight and increase your health at the same time! [19] [20]

New research shows that exercising during pregnancy can help control gestational diabetes and curb the post-natal onset of Type 2 diabetes. [21]

Diabetes patients should sleep soundly for a minimum of 8 hours per day. This will keep them fit and fresh while releasing stress and anxiety, two more of the primary causes of diabetes. [22]

According to a recent study, plant-based foods contain antioxidants (polyphenols) that may improve blood sugar in people at risk for diabetes and heart diseases [23]

Rate this article
Average rating 4.1 out of 5.0 based on 174 user(s).
Read This Next:
Popular Articles