Going on a diabetic diet is essential for more than 29 million people in the United States alone, and more than 450 million people around the globe. Diabetes is one of the fastest-growing health concerns on the planet and is largely blamed on a gradual change in dietary habits, as well as the increase in processed foods. Diabetes is a disease that affects the body’s ability to produce or utilize insulin, a critical hormone in the body that allows glucose to enter the cells and be used for energy.

Type 1 diabetes is characterized as an autoimmune disease, in which the body attacks the insulin-producing cells in the pancreas, leading to a build-up of glucose in the bloodstream since it can’t enter the cells (hyperglycemia). Type 2 diabetes is typically caused by lifestyle factors and doesn’t usually appear until after the age of 35. In this version of the disease, which is much more common, the body is able to produce insulin, but due to insulin resistance, the body can’t properly use it, which also results in a build-up of glucose in the bloodstream. Type 1 diabetes usually requires insulin injections, while Type 2 diabetes is often treated with a combination of dietary changes and insulin injections. For both types of diabetes, a diabetic diet is crucial to maintain a normal quality of life and mitigate the effects of your condition.

What is a Diabetic Diet?

A diabetic diet consists of eating healthy foods at regular times during the day, which can prevent abnormal spikes in blood sugar and ensure that your body can properly use the insulin it produces. Eliminating excess calories and high-fat foods are the best way to monitor your blood sugar, along with cutting down on overall carbohydrate intake, which are basically sugars that break down into glucose within the body. 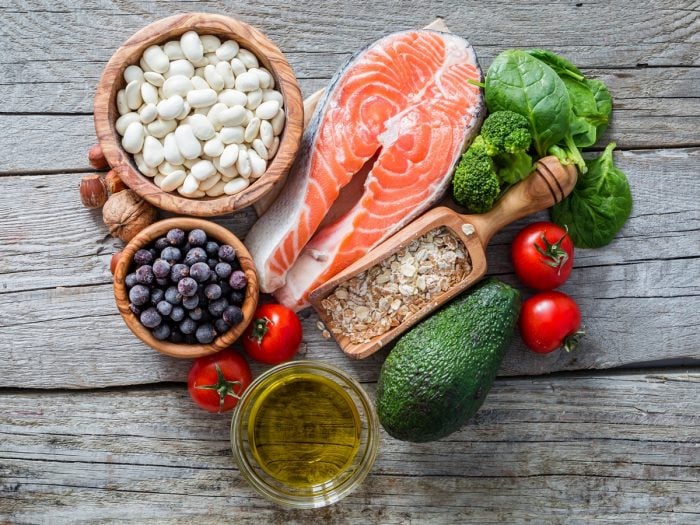 In addition to eating the right foods, you must also eat them at the proper time of day and make them evenly spaced out. This is particularly important for Type 2 diabetes patients, as the proper diabetic diet should allow your body to properly utilize the insulin that it produces.

When you hear the word “fat”, it typically has a negative connotation, but healthy fats, such as polyunsaturated and monounsaturated fats, are actually able to help lower your blood sugar levels and keep your diabetes under control, but only when consumed in moderation.

Simple sugars break down quickly in the body and turn into glucose, whereas more complex carbohydrates, such as starches, low-fat dairy products, vegetables, and fruit, will break down slower and prevent the dangerous spikes and drops in blood sugar.

Foods that are high in fiber are some of the most important elements of a diabetic diet, as they can regulate how your body digests food and slows down the process. Dietary fiber can control the rate at which insulin and glucose are released into the bloodstream, an ideal situation for people with Type 2 diabetes.

Since red meat is not recommended in a diabetic diet, omega-3 rich foods, such as fatty fish, are an excellent alternative. These foods can lower “bad” cholesterol levels in the body, which can help to mitigate the symptoms of diabetes.

As opposed to normal white flour-based foods, whole-grain foods are an excellent source of dietary fiber, which can regulate the release of insulin and glucose, spreading it out over a longer period, which prevents those dangerous spikes and drops. Whole-grain foods are also excellent ways to prevent diabetes in the first place!

Lean meats like poultry and fish have significantly less fat than red meat, so if you want to lower your overall fat levels, which is a contributing and complicating factor for diabetes, switch from steak to turkey, or add tuna and halibut for an even healthier boost to your body.

Low in carbs and calories, but high in minerals and key antioxidants, broccoli is known to control blood sugar levels and protect the cardiovascular system. Since diabetes is so closely tied to heart health, protecting your cardiovascular system often means preventing or managing diabetes.

The active ingredients in garlic are known to counter many of the conditions that lead to metabolic syndrome, which includes diabetes. Garlic can lower blood pressure, reduce overall lipid levels and prevent deposition of plaque in the arteries and blood vessels, all of which can keep blood sugar in check.

Studies have shown that specific fruits, such as apples and blueberries, can actively prevent the development of Type 2 diabetes, and can help diabetics manage their blood sugar levels effectively.

When it comes to a diabetic diet, there are certain power foods that should be a part of your daily intake, such as legumes, nuts, vinegar, spinach, citrus fruit, cacao and soy-based foods.

These common foods are low in sugar, high in fiber and rich in certain antioxidants that can lower overall cholesterol levels and keep your blood sugar in check.

Beans are some of the densest sources of fiber you can eat, and studies have linked them to measurably lower blood sugar and cholesterol levels.

Following a meal, vinegar can have a suppressive effect on blood sugar, slowing the digestion of simple carbohydrates, preventing large spikes in glucose, allowing insulin to work more effectively.

Cruciferous vegetables like spinach and collard greens can help suppress blood sugar levels, as they are extremely low in calories and carbohydrates, but rich in minerals and other key antioxidants.

Some fruits are very high in sugar, but citrus fruits also tend to be high in vitamin C, vitamin A, and other antioxidants, as well as fiber, which can control your blood sugar levels.

Soy-based foods are an ideal way to replace a high-fat protein source in your diabetic diet, while also delivering a wide range of nutrients and dietary fiber, which will control your glucose levels.

Controlling blood sugar levels is critical on a diabetic diet, and this is possible by including foods like cinnamon, kale, avocado, sour cherries, eggs, and coffee.

Certain studies have found that regular consumption of cinnamon can dramatically lower blood sugar and cholesterol levels, making it the perfect addition to a diabetic diet.

Eggs have a glycemic index of 0, which means it has very little effect on blood sugar. That being said, there is cholesterol in eggs, so only eat these in moderation on a diabetic diet. 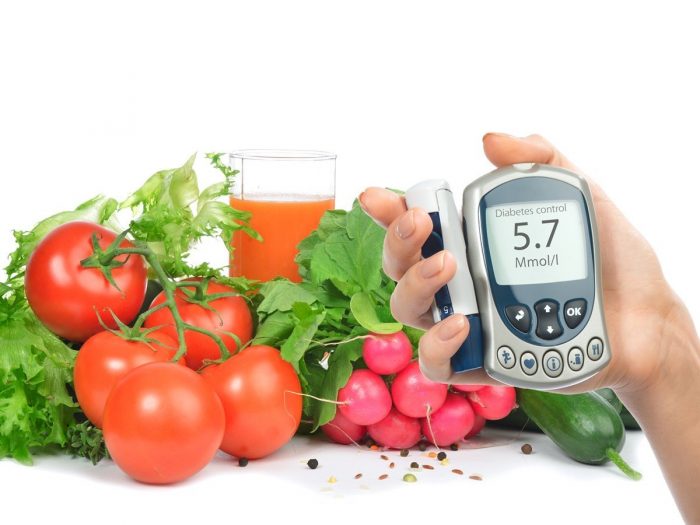 An assortment of foods that can help manage diabetes. Photo Credit: Shutterstock

Unlike traditional cherries, sour cherries are high in bioflavonoids and anthocyanins, both of which can improve metabolic activity and suppress blood sugar.

If you are following a strict diabetic diet, you should definitely avoid foods that include saturated fats, cholesterol, sodium and trans fats. All of these foods can lead to clogged arteries and poor cardiovascular health, as well as obesity and excess cholesterol in the body. Diabetes, particularly Type 2, is closely tied to being overweight, with high blood pressure and cholesterol levels. These foods don’t need to be completely avoided, but they should only be consumed in strict moderation. Also, avoid foods that may raise blood sugar levels.

Arguably the simplest carbohydrate, there is very little nutritional value, but the carbohydrate breaks down very easily and increases blood sugar rapidly.

This type of milk is high in saturated fats, which can increase insulin sensitivity and boost cholesterol levels, two things you definitely want to avoid on a diabetic diet.

Bacon may be one of your favorite foods, but red meat is extremely high in saturated fats, which can lead to clogged arteries and cardiovascular problems, as well as increasing insulin sensitivity.

Convenience can kill, in the case of fast food, as these burgers and fries are very high in saturated fat and sodium, as well as calories, compromising your dietary goals and causing huge spikes in your blood sugar.

Sugar-rich beverages like soda and other fizzy drinks, as well as alcohol, can lead to rapid spikes in blood sugar and fat deposition. People who drink soda regularly are 25% more likely to develop diabetes or have complications in their diabetic diet.

Rate this article
Average rating 4.1 out of 5.0 based on 29 user(s).
Read This Next:
Popular Articles