When dogs eat corn, it can often cause concern for a dog owner, so it is important to understand the effects that corn can have on your dog and whether it should be avoided.

Dogs can eat corn, but it depends on the form that it comes in. For example, eating corn on the cob is not safe for your dog, as the cob in the center can cause gastrointestinal blockage and even death. Eating canned corn or sweetcorn isn’t inherently bad for your dog, although it shouldn’t form a major part of your dog’s diet. Dogs are primarily fed fat and protein-rich diet, but their carbohydrate and sugar intake is relatively low. While corn can be an occasional treat, it should not be given to your dog in large quantities, as it could lead to a nutritional deficit. [1] 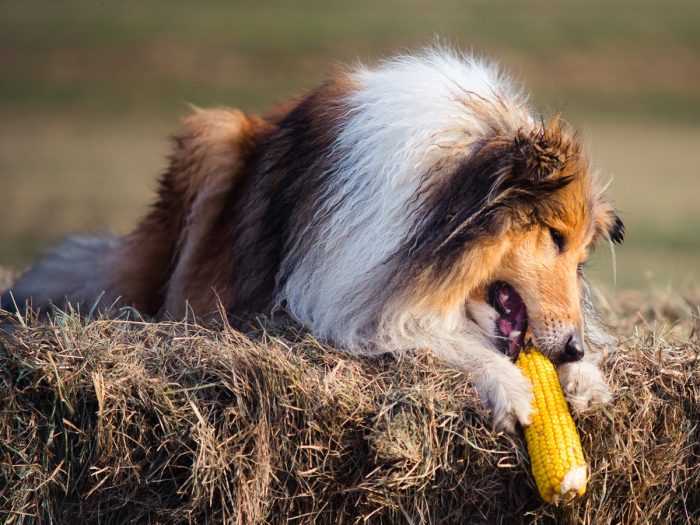 Is Corn Poisonous to Dogs?

Corn is not poisonous to dogs, but it also may not serve much of a purpose and does have some potentially dangerous side effects. According to a study published in the Canadian Journal of Comparative Medicine and Veterinary Science, the high levels of carbohydrates and sugars in this vegetable may lead to weight gain or even canine diabetes in your dog. Furthermore, due to the physical nature of corn, it may pass through your dog’s digestive tracts undigested, bringing them no health benefits or nutrients. This isn’t always the case, but generally speaking, corn isn’t the most advantageous vegetable to add to your pup’s diet. [2]

Benefits of Corn for Dogs

There are some potential benefits of feeding corn to dogs in moderation, such as improved digestive health and a boosted immune system. There is a good amount of dietary fiber in corn, as well as certain vitamins and antioxidants that can help canine health in the same way as it can help humans. [3]

How to Feed Dogs Corn?

The best way to feed your dog corn is to add some kernels to their normal food or let them have a bit of corn from your plate, provided it isn’t combined with any intense spice or flavor and isn’t in a creamy sauce. However, moderation is always key.

Rate this article
Average rating 4.2 out of 5.0 based on 5 user(s).
Read This Next:
Popular Articles