Addiction is a global problem and affects millions of people every year. Thankfully, there are a number of home remedies for drug addiction including caffeine, apple cider vinegar, hypnosis, licorice root, ibogaine, milk thistle, skullcap, ginkgo biloba, proteins and omega-3 fatty acids, and nuts. There are also various alternative therapies like meditation, yoga, and animal, horticulture, and art therapy.

Drug addiction, or substance dependence, is a chronic disease that affects the brain and behavior. It usually starts as a voluntary use for recreational or experimental purposes, in time, the drugs change brain chemistry and the addict consumes them compulsively. Drug addiction could mean the abuse of alcohol,  heroin, cocaine, tobacco, barbiturates, amphetamines, ecstasy, and benzodiazepines.

Traditional solutions for drug addiction include:

There are pros and cons to all of those treatment options, particularly the use of medication, which can often lead to addictions of a different kind. Given that fact, there are many people who promote the idea of a natural solution for drug addiction. Let’s look a little closer at some of these impressive home remedies for drug addiction.

Here are some of the best home remedies for drug addiction:

Studies have analyzed the effects of meditation and have found it to measurably reduce the psychological and physiological triggers of substance abuse. Meditation can promote mindfulness and awareness of thoughts and feelings; you can channel that positive energy into mastering your emotions and preventing negative experiences or stress that result in drug use or a relapse. 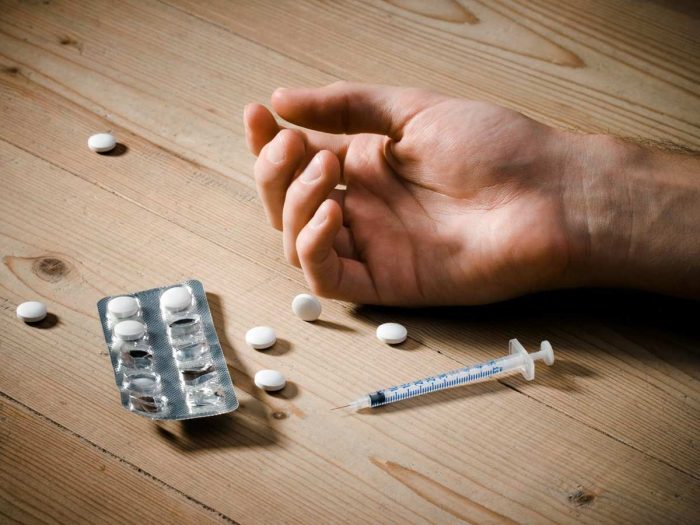 Consult with a doctor if you or your loved ones have symptoms of drug addiction. Photo Credit: Shutterstock

Apple cider vinegar (ACV) is popularly used for reducing cravings for smoking cigarettes and other drugs. This can be attributed to the chemical make-up of vinegar, including acetic acid and malic acid. While research is still ongoing concerning the full impact of ACV, its ability to stop cravings and improve the immune system of the body is significant.

While some may think of caffeine as a drug (and in some ways, it definitely is), it also has the ability to drive away addictive habits. Caffeine is used as a substitute for energetic substance addictions, such as alcohol, ecstasy or cocaine. The boost of adrenaline and cognitive energy can be almost mistaken for those drug rushes and can allow true addiction to wearing off without severe withdrawal symptoms. However, you can also become addicted to caffeine, so use with caution!

Skullcap is a powerful nervine agent that is commonly recommended for people in their first few days of withdrawal symptoms from a drug. If you are suffering from insomnia, headaches, nausea, and depression, there is a good chance you’re going through drug withdrawal, and that’s when you need this herb the most. It isn’t a cure for drug addiction, by any means, but it can ease the process and make it less painful.

Many researchers suggest behavioral alterations as the most effective remedies for drug addiction, and art therapy has gained a great deal of popularity. Art therapy allows addicts to build self-esteem and confidence, avoid a negative response to common triggers, and to step outside of their destructive lifestyle to create and appreciate beauty. This therapy has been linked to lower levels of depression and anxiety, both of which frequently trigger substance abuse.

Milk thistle is a very important herb for improving and protecting the liver, which often suffers as a result of drug addiction. Your liver works to filter your blood, and many of these substances travel through the body via the blood and are thus filtered into the liver! Milk thistle has hepato-protective properties and can help treat cirrhosis and hepatitis, as well as strengthen the liver’s ability to fight off environmental toxins.

Protein and omega-3 fatty acids are key components of a healthy diet, particularly for someone looking for relief from drug addiction. Drugs essentially fry the neurotransmitters in the brain, and for those to be rebuilt, the body needs a solid base of healthy protein to get the mind in proper shape. All the tissues and cells in your body that have been damaged or destroyed by drug addiction must also be repaired. Omega-3s help to protect the body from additional stress during the recovery period.

Yoga is one of the effective ways to cleanse the body and mind of stressors and toxins. For recovering drug addicts, the repetitive and calming nature of yoga helps them change their mindset and reactivity, channeling destructive energy into positive movements and tangible improvements to their body.

Numerous studies have shown that pet therapy can work wonders for recovering drug addicts. The responsibility to “take care of something else” often stimulates a change in mindset, while spending time with animals has other healing effects, including lower blood pressure, decreased anxiety levels, and even a reduction in pain.

The methodical nature of planting a garden and caring for it has been shown to positively benefit the mental state of those recovering from drug addiction. The “taking care of something else” aspect of pet therapy is duplicated here, and horticulture therapy has been linked to decreased stress hormones, less insomnia, pain reduction, lower anxiety, and boosted cognitive function.

Although some people seem skeptical when hypnosis is brought up, there have been numerous reports and studies on the impact of hypnotherapy on drug addiction. There is a clear benefit of hypnotherapy over other forms of cognitive or behavioral therapy. This depends on your susceptibility to being hypnotized, the severity of your addiction, and various other factors.

Gingko is a legendary cure-all that is ideal for those trying to kick a drug habit. Taking ginkgo biloba supplements can improve cognitive strength, concentration, memory, and willpower to help undo some of the damage from drug addiction.