Can You Eat Pomegranate Seeds

While eating pomegranate seeds, people often try to spit each one out, but did you know they are very healthy for you as they have a number of benefits?

What Are Pomegranate Seeds?

Pomegranate seeds are the small white seeds contained within the juicy arils of the pomegranate fruit. As per USDA National Nutrient Database, these red, nectar-filled arils are filled with water content and they provide many nutrients such as carbohydrates, fiber, and protein. The vitamins in them include vitamin C, folate, and vitamin K. These arils also seem to have locked in a number of minerals like potassium, iron, calcium, magnesium, phosphorus, sodium, and zinc. [1]

Can You Eat Pomegranate Seeds?

Although some people choose to spit out each individual seed, they are completely edible and make the fruit far more nutritious. As per a research report published in the Journal of Agricultural and Food Chemistry, pomegranate seeds are rich in antioxidants. These antioxidants, known as polyphenols, include tannins, flavonoids, and anthocyanin, as per a 2012 report published in the Food Science and Biotechnology journal by a team of researchers from Turkey. [2]

The impressive antioxidants further have the potential to prevent chronic diseases while improving your skin appearance. Dr. Francisco A. Toma´s-Barbera and his team of researchers from the Department of Pomology, University of California, USA, published a report in the Journal of Agriculture and Food Chemistry, in which they indicate that the concentration of antioxidants is three times higher in pomegranate juice than those of red wine and green tea. [3] 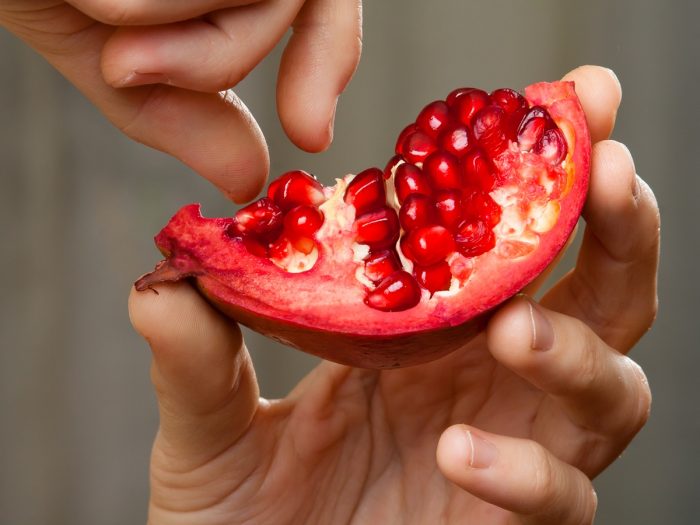 How to eat pomegranate seeds?

However, as is strongly suggested due to the many health benefits, simply eat the seeds right along with the juicy arils. According to a report published in the International Journal of Pharmaceutical Sciences and Research, pomegranate seeds is a traditional home remedy that possesses high conjugated a-linolenic acid content. For the uninitiated, alpha-linolenic acid is an essential omega-3 fatty acid that plays an integral role in preventing and treating diseases of the heart and blood vessels. [4]

Pomegranate seed oil, on the other hand, has a lot of pharmacological properties. It is known for its anti-inflammatory, nephroprotective, hepatoprotective, neuroprotective and anti-cancer properties. Apart from it, it also enhances the immune system, improves carbohydrate metabolism and reduces insulin resistance.

For those who insist on removing the seeds, it is possible.

If you don’t want to eat an entire pomegranate in one sitting, simply spread the arils out onto a baking sheet and put them in the freezer for a few hours. If you are looking for better ways to use pomegranate seeds, try sprinkling them into your morning yogurt or oatmeal, or using them as a tart topper for salads. Adding pomegranate seeds to your diet can help improve digestion and metabolism, boost the immune system, and keep your bones strong.

Rate this article
Average rating 4.0 out of 5.0 based on 53 user(s).
Read This Next:
Popular Articles