Rich, spiced eggnog is a holiday staple, but you may be surprised to discover it also has a number of health benefits!

Eggnog is a spiced and sweetened drink made from cream, milk, and eggs dating back to hundreds of years. Today, the flavors of cinnamon and nutmeg have made it popular in the United States and Canada. This beverage is often included as a part of the abundance at holiday celebrations. This sweet drink can be homemade or bought from the store and is commonly ‘spiked’ with brandy, rum, or even whiskey. Due to its strong flavor, eggnog remains palatable and is traditionally quite high in alcohol content. Consumers should use responsible judgement when adding alcohol ‘to taste’. One can also replace the dairy milk or cream by using other alternatives like soy milk and soy-based cream if suffering from lactose intolerance.

Advocaat is a Dutch beverage that is similar to eggnog, except that it’s made using only egg yolks. It is richer than eggnog, and can even have the consistency of a custard. Other cultures have developed similar drinks, including the Polish ajerkoniak, and Mexico’s rompope. 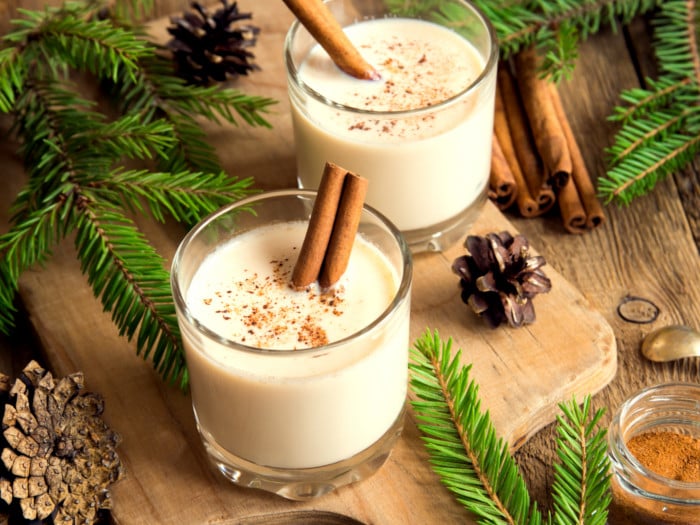 Like most treats, this beverage should be enjoyed in moderation. 1 cup of eggnog contains 19 grams of fat and 344 calories. For perspective, it would take a 40-minute jog to burn those calories off!

There are some surprising health benefits to eggnog.

This beverage has a few uses, including the following:

Although hormones in milk are a concern expressed by some, there is currently no scientific evidence that links hormones in bovine milk to cancer in humans or early puberty in children. Dairy alternatives such as soy may contain estrogen-like substances that can disrupt the endocrine system in people of all genders.