Using einkorn flour is a popular alternative to gluten-containing grains, and also contains an incredible amount of nutrients.

What is Einkorn Flour?

Einkorn flour is the most ancient form of covered wheat and has a much lower level of gluten than traditional wheat flour. The wild wheat variety is scientifically known as Triticum boeoticum, while the domesticated variety is known as Triticum monococcum. Einkorn flour is much more nutritionally dense and experiences much less nutrient loss during processing. While einkorn is not technically gluten-free, it is much easier to digest, so it is widely considered appropriate for those with gluten intolerance, but not for those with celiac disease. [1] [2] 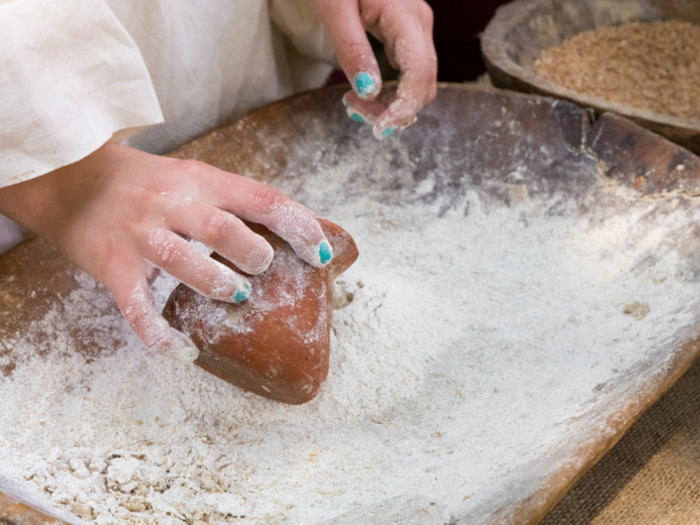 Einkorn flour is a healthier alternative than whole wheat and is superior to our health. Photo Credit: Shutterstock

As mentioned, the nutritional density of this flour is very impressive, with a 100-gram serving (significant) containing more than 1,400 calories, 18 grams of protein, 2.5 grams of fat, and nearly 9 grams of dietary fiber. There is also a good amount of B vitamins, iron, zinc, phosphorous, potassium, and vitamin A in this flour. This flour also contains certain antioxidants, such as lutein and zeaxanthin, which are often only accessible through fruits and vegetables. [3]

The many benefits of einkorn flour include its ability to do the following:

Lutein and zeaxanthin are able to prevent macular degeneration, while the high-fiber nature of this flour can keep you feeling full, thus helping weight loss. According to an animal study in The Review of Diabetic Studies, this flour prevents or delays the onset of type-2 diabetes, improves the appearance of the skin, hair, and nails, and even optimizes brain function. Some studies have found that this ancient flour can balance hormones and normalize reproductive health. [4] [5]

The mineral and vitamin content of this flour can help to improve blood circulation, strengthen bone mineral density, and even relieve inflammation throughout the body, caused by arthritis, gout, headaches, and irritable bowel syndrome. The antioxidants will generally prevent oxidative stress and lower your risk of chronic disease. [6]

How to Use Einkorn Flour?

This ancient flour can be used just like any other form of wheat, primarily in cooking and baking. Remember, however, you will want to use less liquid with einkorn flour, typically 1/2 or 1/3 of what the recipe calls for. The flour also doesn’t need to be kneaded for as long as normal flour, due to the lower content of gluten.

Although this variety of ancient flour does have many benefits for those with gluten intolerance, those with the celiac disease should not use this freely, as there is enough gluten to cause negative reactions. Furthermore, the high-calorie count can lead to weight gain if eaten in excess. [7]