Elderberries have always had a mixed legend. In some folklore, they are seen as protective, and in some, they are home to a malevolent spirit. No wonder then that the more we find out about these berries, the more we realize that they are indeed quite complex. Full of many health benefits, elderberries can also be harmful in some conditions. Let’s find out more about the benefits and risks associated with elderberries.

Elderberries are the fruit of the flowering plant known as Sambucus, more commonly referred to as elder or elderflower. The full scientific name of the most common variant, from which we get the majority of our elderberries, is Sambucus nigra. You will primarily find elderberries in the Northern hemisphere, particularly in Europe and North America, although some southern species are grown in Australia. [1]

The berries are black or very dark blue and have a sharp, sweet flavor that makes them highly preferred for desserts, syrups, jams, jellies, spreads, and as the base for various cocktails and beverages. 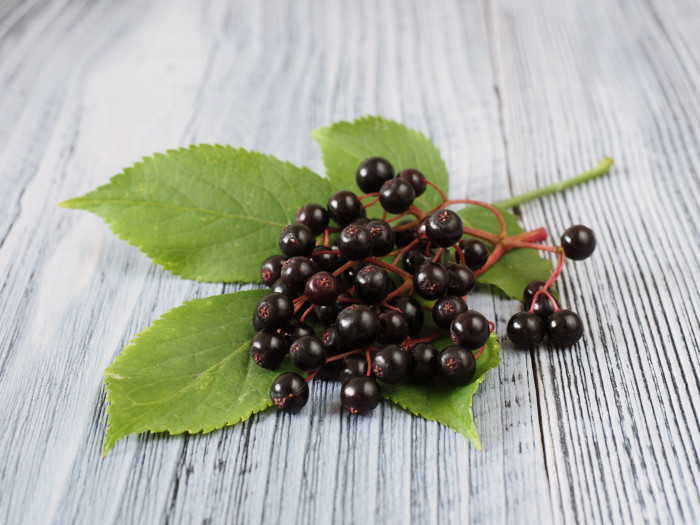 Elderberry is one of the most commonly used medicinal plants in the world. Photo Credit: Shutterstock

According to USDA National Nutrient Database, elderberries are packed with nutrients including minerals like iron, potassium, phosphorus, and copper, as well as vitamins, such as vitamins A, B, and C, as well as proteins and dietary fiber. Add some of the beneficial organic compounds that function as anti-inflammatory and antioxidant agents in the body, and you have one powerful berry! [2]

Elderberries have many health benefits. Let us look at some of them in detail:

Elderberry has always been a popular choice for relieving symptoms of cold and cough. Elderberry tea and syrup are often the top choice for sore throat, cough, cold, bronchitis, or any other issue that affects the respiratory system. Multiple researches have shown that there is validity in this belief. According to one study, flu patients who were given a dosage of elderberry syrup recovered 4 days earlier than those who were not given these supplements. [4]

In another 2016 randomized double-blind study, published in the journal Nutrients, intercontinental air travelers were given elderberry extract to deal with common respiratory problems during air travel. Participants who were taking elderberry extract were found less likely to catch a cold when compared to the control group. The severity and duration of their cold were also reduced. [5]

Elderberry was traditionally used to protect people during an influenza outbreak. Research now tells us that elderberry syrup has phytochemical compounds that make it so effective in dealing with an influenza season. A 2019 Australian study, published in the Journal of Functional Foods found that elderberry inhibits the entry and replication of the flu virus in the human body. In other words, it can inhibit the infection in the healthy and prohibit it from worsening in the sick. The immune-boosting compounds were the anthocyanidin, the phytochemical which gives elderberries their color. [6]

A study published in Phytotherapy Research revealed that high fiber levels in elderberries help eliminate excess cholesterol from the system and make room for HDL (good) cholesterol that the body needs. This can help eliminate the chances of developing atherosclerosis and other cardiovascular issues. Additionally, a diet rich in flavonoids like anthocyanins has been found to reduce the risk of heart disease. The high level of potassium in the berries also protects the heart by relaxing the tension of blood vessels and arteries. As a vasodilator, potassium can significantly reduce blood pressure and keep your heart healthy! [7]

Multiple researches have shown the potential of elderberries in strengthening our immune system. The Australian study showed that its antiviral compounds fortified the immune system in fighting the flu. An animal study where diabetic rats were treated with alternative medicine containing elderberries showed that it could strengthen their immune defenses. In lab studies, the powerful antiviral compounds in the berries have also shown potential in fighting HIV-1 infection. [8] [9]

Some lab tests have shown elderberry’s potential in strengthening bones. One study found that polyphenols in elderberry extract could be effective as a dietary supplement in dealing with diabetic osteoporosis. However, more research is required in this field. [10] 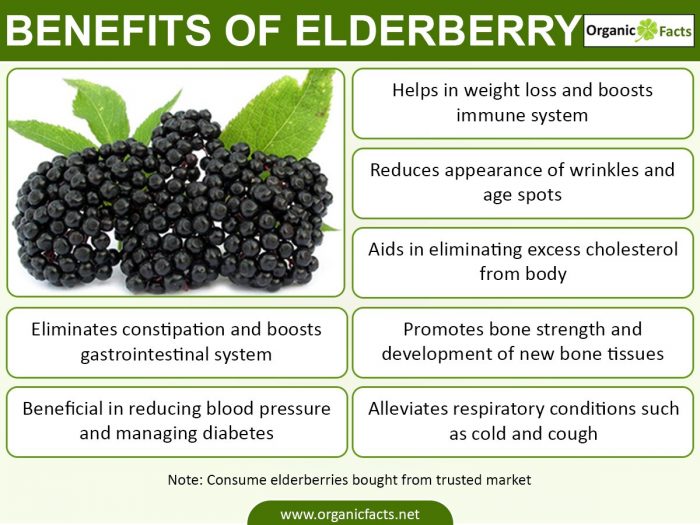 Elderberry makes its way into a lot of cosmetic applications, primarily because the bioflavonoids in elderberries can boost your skin health. Elderberry contains polyphenols and vitamin A, which makes it perfect for preventing or lessening wrinkles, helping age spots to fade, and generally improving the glow and tone of our skin native Americans used it to treat skin conditions. It was used as an astringent as well as to treat skin irritations. This could be due to the antioxidants present in elderberries, which have strong anti-inflammatory properties. [11] [12]

Yes, unripe and raw elderberries are toxic. They contain a compound known as cyanogenic glycosides which can cause cyanide poisoning. Fortunately, cooking the berries removes the toxic compound. Keep in mind that the leaves, stems, and bark also contain this compound. It is imperative that it is properly prepared and taken in the right dosage. Hence, medical advice is highly recommended before taking the berries. Taking raw elderberries has caused acute gastric distress, nausea, vomiting, and neurological symptoms in at least one case. [13] [14]

Do not take them if:

Where to Buy Elderberries?

You are not likely to get fresh, frozen, or dried elderberries in your local market. Fortunately, it is now easily available through a number of online vendors. Walmart also keeps dried elderberries. Make sure that you are not buying raw berries and prepare them properly before consuming them. Avoid leaves, bark, and stems of the plant.

Rate this article
Average rating 4.0 out of 5.0 based on 586 user(s).
Read This Next:
Popular Articles