Experiencing a false pregnancy is uncommon, but not impossible, and it can be a very confusing time in your life, so it is best to understand everything about this unusual occurrence.

What is a False Pregnancy?

A false pregnancy goes by many names, including pseudocyesis, phantom pregnancy or hysterical pregnancy, and is characterized by the physical manifestation of certain symptoms of pregnancy, even if a woman is not truly pregnant. This type of condition occurs in other mammals as well and is believed to be linked to the endocrine system, which is largely responsible for the regulation of hormones in the body. When certain hormones are depleted or increased, it can mimic the same hormonal release of pregnancy, resulting in some of the same symptoms.

This can lead women to believe they are pregnant, and can even affect men in rare situations when certain pheromones increase estrogen and other traditionally feminine hormone levels in males! False pregnancy is easy to diagnose, once a pregnancy test or ultrasound is conducted. But it can still be a traumatic, stressful or worrying time for many women. [1] 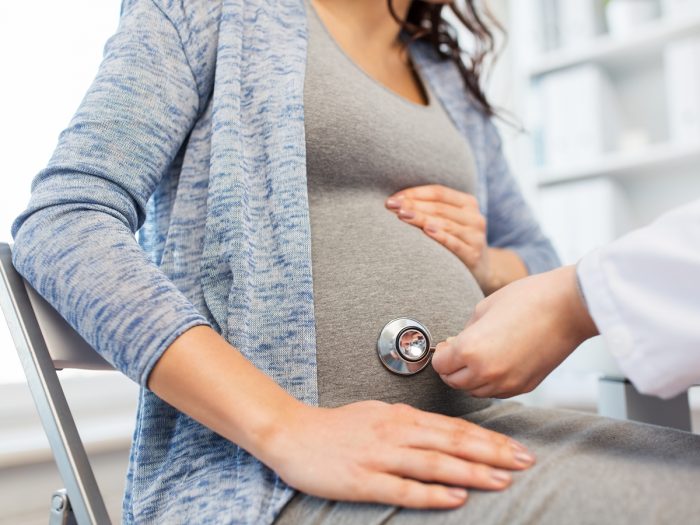 Can you get a positive pregnancy test if you have a false pregnancy?

It is possible to get a positive pregnancy test if you have a false pregnancy; this result is called a false-positive. This can happen to many women, even if they don’t suspect a pregnancy, and is largely due to an error or anomaly in the blood and protein levels in your urine. These false-positive results are rarer than false negatives, but they do occur.

Some of the other causes of a false-positive result include an excessively high level of hCG (human chorionic gonadotropin) as the result of fertility treatments, or if you have a very early miscarriage. In some cases, a woman will have a miscarriage and not realize it, but it could still leave trace amounts of hCG in the body. This could then stimulate certain hormonal changes, which may appear to be a false pregnancy. [2]

As mentioned, the precise cause of false pregnancy is difficult to pin down, since this type of pregnancy appears as a combination of hormonal, psychological, physiological, and physical factors. In some cases, false pregnancy is caused by psychological factors, such as the inability to conceive, multiple miscarriages or simply a deep desire to be pregnant. While these types of psychological or dissociative episodes aren’t common, the stress and expectation of childbirth can be a great emotional weight for some women. [3]

In some cases, this psychological belief can even impact hormones, leading to some of the physical symptoms of pregnancy, while in other cases, a physical explanation like an ovarian tumor or an endocrine disorder will be the cause of the hormonal fluctuations.

Symptoms of a False Pregnancy

The primary symptoms of a false pregnancy include nausea, tender or enlarged breasts, lack of menstruation, weight gain, contractions, back pain, a distended abdomen, and even the sensation of movement in your womb. Obviously, some of these symptoms fall into the physical category, while others are somewhat psychological, but remember that the body and mind are closely connected. When a woman experiences any of these symptoms, pregnancy is the most natural explanation, which is why it can be difficult to convince her, that she is, in fact, not pregnant. Although, positive reinforcement may prove to be helpful. [4]

When a woman with a false pregnancy enters the hospital, some of the physical symptoms may even fool a doctor, but hospital pregnancy tests and ultrasounds are incredibly accurate in their ability to determine whether someone is pregnant. A pelvic examination and a check for a heartbeat can also be performed to confirm that there isn’t a child. Interestingly enough, many doctors report seeing physical changes that are in line with pregnancy, such as an enlarged uterus. Prior to an ultrasound or more intensive physical examination, a basic urine pregnancy test will be administered. [6]

One of the few cases where a hospital urine pregnancy test can be fooled into a false-positive result is if certain rare cancers are in the body. These cancers can generate similar hormone levels to that of a pregnant woman. Again, more tests would quickly be done and a false pregnancy would be confirmed. [7]

In terms of treatment, women that are suffering from hormonal imbalances can be prescribed any number of medications and treatment pathways. If you want to treat some of the specific symptoms, such as stomach distension, breast tenderness, nausea or menstrual cessation, other medications are available. [8]

As mentioned earlier, false pregnancy is very rare, and if you have the right support system and doctor in place, you should be able to quickly identify the error and move on without any long-term repercussions.

Rate this article
Average rating 4.2 out of 5.0 based on 15 user(s).
Read This Next:
Popular Articles