Farro is an important staple food in many parts of the world and has had a resurgence in popularity in recent years.

Farro is a type of whole grain that is slightly larger and longer than barley but has similar chewy consistency when cooked. What many people don’t realize is that farro is a particular type of wheat, and is therefore not gluten-free. However, it is relatively low in gluten as compared to many common types of wheat available today. Farro is considered an ancient grain, one of the oldest grains cultivated in human history. It has a strangely nutty, yet sweet flavor that many people enjoy, and is primarily produced in Italy. [1]

In terms of nutrition, farro is a powerhouse of nutrients and vitamins; in a 1/2 cup of this grain, there are nearly 4 grams of protein, 3.5 grams of dietary fiber and an impressive 26 grams of carbohydrates, which explains why it is such an energy staple in certain cultures. These numbers are significantly (nearly double) the nutrients of common wheat varieties. This whole grain also delivers good amounts of vitamins C, B, A, and E, as well as modest levels of zinc, iron, and manganese. There are between 100 and 170 calories in a 1/2 cup serving of this grain, depending on the variety, more than 80% of which comes from carbohydrates. [2]

Some of the many health benefits of this grain include its impact on the immune system, digestion, cardiovascular health and chronic disease, among others.

High levels of fiber can help suppress cholesterol levels and lower your risk of atherosclerosis, heart attack, and stroke.

There is an incredible amount of fiber in this grain, which can help to bulk up stool, soothe inflammation in the gut, and eliminate symptoms of constipation. [3] 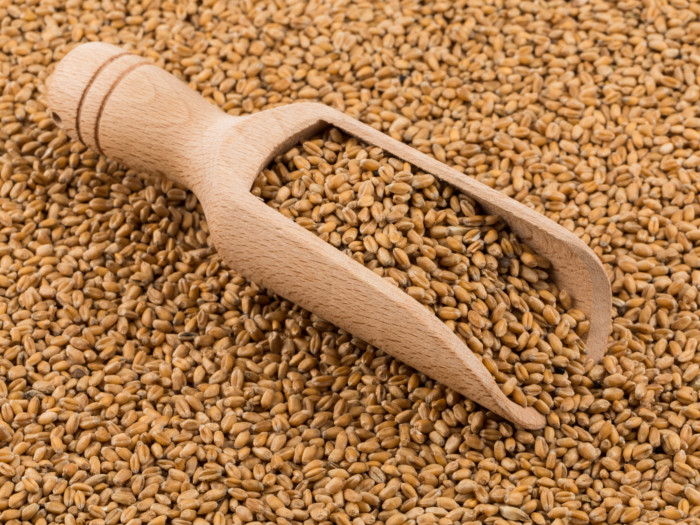 Farro is a type of grain with a nutty flavor and ancient roots. Photo Credit: Shutterstock

There are some antioxidant components in this grain, such as the presence of vitamin E and vitamin C, which can prevent oxidative stress and chronic disease. [4]

Moderate amounts of iron help increase circulation, as iron is required in the production of every red blood cell, which boosts oxygenation and resource delivery throughout the body. [5]

Farro vs Rice vs Quinoa

Three of the most popular alternative grains in recent years have been farro, quinoa, and rice, but there are some clear differences between the three.

This ancient grain has impressively high levels of fiber and protein, and comes in three varieties, whole, semi-pearled and pearled. It does contain gluten, but for those without celiac or a strong sensitivity, the amount is negligible. It also offers very high levels of calcium.

Although quinoa contains less protein and fiber than farro, it is considered a complete protein, due to its essential amino acids. There are good amounts of fiber in quinoa, but it is insoluble, so it won’t be as effective for digestion. Fortunately, quinoa is gluten-free for those who need that dietary restriction.

While rice is an easy and widely available option, it offers far less protein and fiber than quinoa and farro. Rice is also lacking in many other minerals and nutrients, such as calcium and iron, and is less versatile than farro.

Rate this article
Average rating 2.7 out of 5.0 based on 3 user(s).
Read This Next:
Popular Articles