If you’re wondering whether the popular fava beans “and a nice Chianti”, as Anthony Hopkins’ character from Silence of the Lambs would like, is a good idea or not, then you’re at the right place. Highly nutritious and full of health benefits, these beans are not just a good option for those looking for a healthy retreat, but also a favorite of food aficionados and experts, thanks to the different and amazing ways in which they can be prepared. Let’s take a detailed look at their nutrition and health content in this article.

What are Fava Beans?

Fava beans, also known by other names, such as broad beans, faba beans, and Vicia faba, belong to the family of pea and beans, which is Fabaceae. They come in various forms and varieties, including in pods, dried, canned, and frozen. They have been a popular part of the Middle Eastern diet, mainly because of their rich protein content; but have gained widespread attention all over the world for their slightly sweet and earthy flavor, and of course, the health benefits, which we will learn about in detail below. 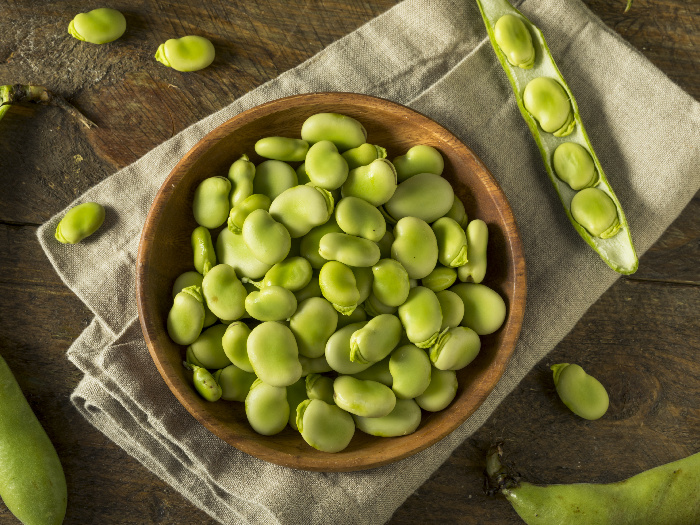 Fava beans are a good source of energy, with a 100-gram serving offering 110 kcal of energy. They are rich in protein, carbohydrates, and fiber as per the USDA Nutrient Database. These beans contain slight sugar levels, which gives them their sweet taste. When it comes to minerals, fava beans offer calcium, iron, magnesium, phosphorus, potassium, sodium, and zinc. They also contain various vitamins, including vitamin C, thiamin, riboflavin, niacin, vitamin B6, folate, and vitamin A, E, and K, making them a nutritious and tasty addition to your diet.

Given their rich nutrient content, fava beans have many benefits such as treating Parkinson’s disease, preventing birth defects, improving bone health, and fighting anemia. Let’s take a detailed look at them below.

Treat the Symptoms of Parkinson’s

According to a study published in 2013, fava beans, given their rich L-dopa and C-dopa content, help improve the motor performance in those suffering from Parkinson’s disease by increasing the blood dopamine levels.

Another study revealed that when patients with Parkinson’s disease were fed 250 grams or 1.5 cups of fava beans in a day, their blood dopamine levels showed a positive rise similar to the effects of their L-dopa medications. These beans can also be combined with other Parkinson’s disease medications like carbidopa for an improvement in symptoms.

Having said that, it is important not to replace your medically prescribed drugs for Parkinson’s disease with fava beans, as more research on this topic is still needed.

According to the Centers for Disease Control & Prevention, fava beans have a huge supply of folate, with 106% of the recommended daily requirement per 100g serving. Folate is one of the most important nutrients for fetal growth. It helps in the creation of cells and organs for the fetus, thereby preventing the risk of neural tube defects. A study done at the Boston University School of Medicine revealed that women who got an ample supply of folate in the first few months of their pregnancy had a markedly lower risk of spinal cord and brain issues in their infants, thereby making broad beans a good dietary option for them.

Fava beans, being rich in manganese, copper, zinc, and calcium, are known to help improve bone health. As per research, one single cup with a 100 gram serving of fava beans contains 43 mg of manganese. Manganese helps in reducing calcium deficiency in the body, thereby reducing the risk of bone-related ailments like osteoporosis and bone loss in older women.

Due to the high iron content in fava beans, they help fight the symptoms of anemia, such as tiredness, weakness, shortness of breath and more. Iron promotes the production of hemoglobin in the body which helps in carrying oxygen to your cells. Hence, regular consumption of fava beans may help prevent anemia too.

Although an important point to note here is that those suffering from a G6PD deficiency, should not consume these beans as they may lead to another blood disorder called hemolytic anemia.

One cup or 170-gram serving of fava beans contain around 180 calories, which makes them a good food option for those looking to lose weight. According to research done at the University of Washington School of Medicine, they also have a rich supply of protein and fiber, which help improve the feeling of fullness in your stomach thereby curbing the need or urge to eat more.

Fava beans are rich in soluble fiber, which helps in binding and removing cholesterol from your body. A study also reveals how soluble fiber helps in decreasing the LDL cholesterol and glucose levels in the body.

Fava beans are a rich source of copper, which is an important mineral to regulate the production and growth of healthy blood cells. Copper also promotes the functioning of white blood cells, which destroy the disease-causing pathogens in the body. Research also reveals how broad beans can promote antioxidant or free-radical fighting abilities in people as they age.

It is important to exercise moderation while consuming fava beans as an excess of them can have some side effects.

While the side effects of these beans are rare, they are very much possible, so please see a medical professional if you feel uncomfortable after eating them.