What is Flaxseed Oil?

Flaxseed oil, also known as linseed oil, is a concentrated vegetable oil obtained from flax and has been known to humans for a surprisingly long time. Flax, which is scientifically known as Linum usitatissimum, has many uses and has been a part of various cultures. Although it is believed to have been originated from the Mediterranean region but Canada, Russia, France, and Argentina are its largest producers. It is a very versatile plant and grows in diverse climates while having a lot of uses. For thousands of years, it was used not only as a key ingredient in linen but also as a very beneficial and easily accessible food source. Flaxseed oil, rich in omega 3 fatty acids, is one of the most common alternatives for traditional vegetable oil. This is partly because it has the most impressive list of health benefits attributed to it. It can be used in the exact same way as any other vegetable-based oil, the flavor of it being pleasant and unobtrusive. Moreover, it cooks evenly, keeps the body healthy, and is relatively simple to extract. [1] [2] 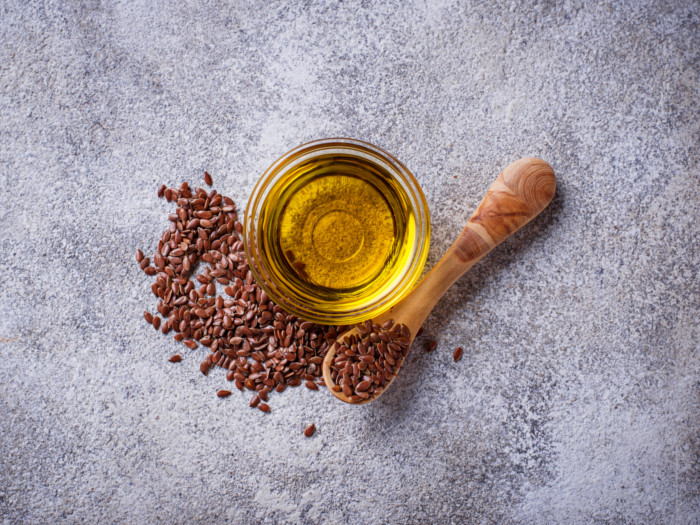 Flaxseed oil and fish oil may be effective treatments for dry eye and reduce the need for eye drops. Photo Credit: Shutterstock

While linen is the major area where you would encounter flax, the nutritional and dietary market around the globe is starting to show a marked increase in interest. Let’s take a look at some of these intriguing health benefits of flaxseed oil!

Out of all the vegetable oils on the market, flaxseed oil has the highest content of omega-3s, which is very important. While both forms of cholesterol are necessary for the body, omega-3 is considered as the “good” form, called HDL cholesterol. Omega-3 fatty acid helps scrape off the bad form of cholesterol, called LDL cholesterol and helps balance the cholesterol in your body. This means that you won’t have plaque buildup on the walls of your arteries and blood vessels, thereby helping in reducing blood pressure, lowering your chances of developing atherosclerosis, and effectively preventing heart attacks and strokes. In other words, protect your heart with flaxseed oil! Flaxseed oil contains fiber, which is also important for maintaining cholesterol levels in the body. [4]

Flaxseeds and flaxseed oil have been treasured for their omega-3 fatty acid and lignan content. These compounds are also known to help in reducing your risk of colon cancer and breast cancer. According to Lilian Thompson’s report, (a researcher at the Department of Nutritional Sciences, Faculty of Medicine, University of Toronto, Ontario, Canada), published in the Carcinogenesis Journal, lignans found in flaxseeds have a colon cancer protective effect. Research by Cynthia Mannion, The University of Calgary, Canada also suggests that flaxseed oil is an important part of an anticancer diet. [5] [6] [7] [8]

The high fiber content of flaxseed means that the digestive system gets regulated. Fiber helps bulk up the stool and move it through the digestive tract, thereby preventing constipation, as well as diarrhea, since it absorbs watery stool.

The hormones in flaxseed improve the quantity and quality fluid in your eyes, the lack of which can be very annoying. Dry eyes can be prevented with the consistent use of flaxseed oil in the diet. It can also prevent more serious forms of this condition, such as Sjogren’s syndrome. [9]

Crohn’s disease is a health condition that afflicts people all around the world. Research on flaxseed oil has shown a reduction in the inflammation of the colon and intestinal tract with the consumption of this oil. This, in turn, helps prevent Crohn’s disease. [11]

After women go through menopause, their body changes in dramatic ways, particularly in terms of the balance of hormones, such as estrogen. The lignans in flaxseed oil, namely, secoisolariciresinol, matairesinol, and pinoresinol, have a dramatic effect on hormonal balance, thereby helping many post-menopausal women function better. Word of Caution: Although most specialists regard flaxseed as a healthy oil, there is still a great deal of research being done. It has shown to increase the flow of blood because of being a vasodilator. This includes faster healing after surgery as well. Furthermore, it is unclear as to whether women should consume flaxseed oil during pregnancy or breastfeeding as the effects of this have not yet been adequately researched. [12]

Rate this article
Average rating 4.0 out of 5.0 based on 261 user(s).
Read This Next:
Popular Articles