Flossing is a common practice for dental care all around the world, so it is important to understand the potential benefits and the proper method to use.

Flossing is the act of cleaning the spaces between your teeth with dental floss, in order to prevent food buildup and other dental problems. In a communication to the American Dental Association (ADA), the U.S. Department of Health and Human Services termed flossing as “an important oral hygiene practice”. [1]

Why is Flossing Important?

Our mouth is full of bacteria. These bacteria, along with mucus and other particles, constantly form a sticky, colorless “plaque” on teeth. This plaque, if allowed to build up, eventually hardens and gives rise to gum (periodontal) problems. In the advanced stage, periodontal disease leads to bleeding gums and even tooth loss. Further, it has been theorized that periodontal pathogens work their way through the bloodstream, and affect distant sites, thus causing diseases in areas other than the mouth. The use of toothbrush alone does not serve the purpose of maintaining good oral hygiene, especially in inaccessible and difficult to reach areas between teeth, which demands the use of some adjuncts like dental floss. Regular flossing helps get rid of plaque and hence, flossing has long been considered an indispensable part of an effective oral hygiene routine. [2] [3] [4] [5] 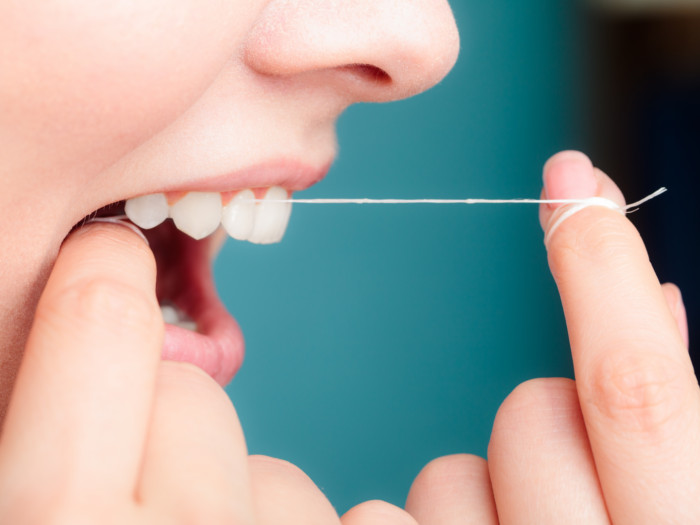 The Invention of Dental Floss

Dental floss is generally made of nylon filaments and it could be waxed unwaxed, thick, thin or flavored. The type of floss to be used is based on ease of use and personal preference. [7]

If this is a new concept to you, it is important to understand the basics of how to floss. It should all start with your dental floss, which can be acquired from dentists or from any store that sells toiletries.

Note: For people who lack manual dexterity and control, floss holders can be an easy aid. Disposable single-use floss holders with pre-threaded floss and powered flossing devices are also available as convenient options for flossing. [9]

The many benefits of flossing your teeth include the following:

When food becomes trapped between your teeth for hours or even days, it can give rise to bad breath also called halitosis as the trapped food starts to rot due to the presence of bacteria in the oral cavity. Due to the lack of proper oral hygiene, there is plaque build-up resulting in malodor which can be embarrassing. Porter et al, in their article state, that, in the developed world, 8-50% of people believe that they have persistent recurrent episodes of bad breath. The same article also suggests that efficient teeth cleaning, by using a brush and dental floss, can significantly reduce bad breath by reducing plaque build-up. [10]

When small food particles get caught beneath the gums, it can cause tartar to form which is a hardened form of plaque that is difficult to remove without a dental scaler. This unremoved plaque and tartar on the gum line lead to swelling or inflammation of gums also called gingivitis. Although some surfaces of the teeth may be easily cleaned using a toothbrush, plaque accumulated in the area between two teeth requires flossing to be done in order to achieve plaque removal and subsequent reduction in gingivitis. [11]

Bleeding from gums is considered an initial clinical sign of gum inflammation or gingivitis and flossing has been associated with a reduction in bleeding from the gums. This is supported by a study published in the journal of periodontology wherein, Graves et al, conducted a two-week clinical trial which compared the effectiveness of three types of dental floss to an oral hygiene regimen that involved only brushing of teeth for reducing bleeding from gums. Here, all participants were given toothbrushes with instructions to brush twice daily and were divided into 4 groups. While one group was meant to use only a toothbrush, the other 3 groups were allotted three different types of dental floss with proper flossing instructions. The results of the study showed a 67-69% reduction in bleeding from gums in the groups using dental floss along with brushing, whereas the toothbrush-only group showed only a 35% reduction in gum bleeding. [12]

Periodontal disease (periodontitis) is an inflammatory infection that attacks the mouth and gums and affects the tissues which surround and hold your teeth in place. Centers for Disease Control and Prevention (CDC) states that periodontitis affects 34% of the United States population over age 30 (about 36 million persons), and it a major cause of tooth loss in about 13% of adults. This is typically caused by poor oral hygiene habits like irregular brushing and flossing which eventually results in plaque build-up between teeth. According to the National Institute of Dental and Craniofacial Research, flossing regularly to remove plaque from between your teeth can keep your gums and teeth healthy and can greatly lower your risk for developing periodontitis. [13] [14]

Cavities (dental caries) form when we eat sugary products and allow them to accumulate due to poor oral hygiene. These accumulated food particles are attacked by decay-causing bacteria in our mouth and this results in acid formation which dissolves our enamel and leads to cavities. A systematic review in the journal of dental research assessed the effect of flossing on caries reduction and stated that there was a 40% reduction in cavities in milk teeth of children when professional flossing was done regularly for a period of 1.7 years on all school days. When professional flossing was done for a three-month period, no such reduction in cavities was seen, indicating that “regular” flossing is indeed associated with a lower risk for cavities. [15] [16]

Proper flossing may be challenging

If you are new to flossing, allow yourself at least one or two months to get used to the proper technique of flossing. You may initially start flossing a few front teeth while standing in front of a mirror, and, as you get comfortable and confident, floss more teeth till you cover your entire mouth. Work towards incorporating flossing as a daily habit so that you do it regularly and reap maximum benefits from flossing. As you get used to the process of flossing, you might experience a few signs of discomfort such as: [17]


Dr. Maneka Vig, Bachelor of Dental Surgery, is a certified dental surgeon from Maharashtra University of Health Sciences, India with 8 years of experience. Spearheaded the operations for a branch of one of India’s largest dental chains. She is passionate about evidence-based medical writing and its practical applications.

Rate this article
Average rating 3.7 out of 5.0 based on 3 user(s).
Read This Next:
Popular Articles