The powerful benefits and uses of frankincense include its anti-cancer potential and its ability to heal the gut, enhance the skin, reduce arthritic pain, and relieve asthma symptoms. Frankincense, literally translated to pure incense, is one of the gifts, along with gold and myrrh, carried by the three wise men to honor young Jesus. It is often used in religious ceremonies and in aromatherapy. Let us find out more about the ancient tree resin.

Frankincense is a fragrant gum resin of the Boswellia serrata, a tree native to India, the Middle East, and North Africa. The resin forms dried orange or light yellow droplets and have a fresh pine, woodsy scent. It is used as a traditional remedy in these regions as it has anti-inflammatory, expectorant, antiseptic, anxiolytic, and anti-neurotic properties. 60 percent of frankincense is oil and the rest of the composition includes diterpenes, monoterpenes, ethyl acetate, octyl acetate, and methyl anisole. 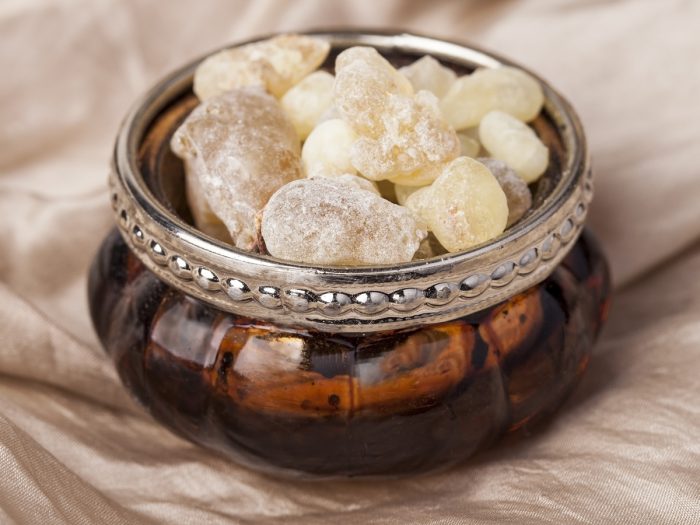 Frankincense is an aromatic resin used in incense and perfumes. Photo Credit: Shutterstock

How To Use Frankincense?

Frankincense resin is edible and is often used in home remedies for skin and digestion problems, according to a 2016 study. If you are going to ingest it, it is advisable that the resin is translucent and has no black or brown blemishes. Here are four different ways you can use it:

Let us look at the evidence-based benefits and uses of frankincense.

Frankincense contains anti-inflammatory triterpene molecules called boswellic acid. According to a 2009 laboratory study published in the BMC Complementary and Alternative Medicine, frankincense oil was effective in suppressing specifically cancer cells. It did not have the same effect on normal bladder cells, demonstrating its anti-cancer potential. A more recent study in 2016 on boswellic acids showed that they have an anti-tumor effect and help cause programmed cell death or apoptosis.

Frankincense has a natural astringent property, which helps tighten the skin and balance its oil production. It also helps reduce acne as it has anti-inflammatory abilities, according to a study in the Indo American Journal of Pharmaceutical Sciences. The resin is also used in several cosmetic products to remove age spots and blemishes.

A study published in the European Journal of Medical Research revealed that consuming 900-1050 mg of frankincense daily for six weeks helped treat chronic ulcerative colitis, an inflammatory bowel disease. Another study published in the Planta Medica compared the effects of the resin versus sulfasalazine on chronic colitis. Frankincense showed better results in treating the digestive problem as well as healthy remission rates. Furthermore, a special extract of the gum resin, Boswellia serrata H15, showed positive results in the treatment of Crohn’s disease, another kind of IBD.

Historically, frankincense has been used to relieve arthritic pain. A study published in Elsevier’s Seminars in Arthritis and Rheumatism revealed that a formulation of Boswellia and curcuminoid, a compound derived from turmeric, was an effective pain-reducing complementary therapy for people suffering from knee osteoarthritis.

Frankincense oil, or olibanum, is recommended for asthma as it has a calming effect. It has expectorant, anxiolytic, and anti-neurotic properties that help bring down overall stress levels in people and as a result, help alleviate asthma symptoms. A study published in the Indian Journal of Allergy, Asthma, and Immunology showed that people suffering from chronic asthma benefitted from a daily dosage of 3 mg per kg (of body weight) of olibanum and their lung capacity showed a marked improvement.

There is no clarity on safe and optimal dosage for frankincense or Boswellia, according to a study published in the Indian Journal of Pharmaceutical Sciences. It is advisable to check with your doctor on the recommended dosage for a particular health condition you may have.

According to the USFDA, frankincense gum resin is marked safe and included in the list of permitted substances as a food additive. The side effects felt by people during clinical studies included:

Women who are pregnant should avoid using it as it has the potential to induce abortion.