Galangal may look similar to ginger or turmeric, but it has some unique properties that you should know about before adding it to your diet.

Galangal is a broad term for four different species of rhizomatous spices from the ginger family, Zingiberaceae. The four main types of galangal are the Alpinia galanga, Alpinia officinarum, Boesenbergia rotunda, and Kaempferia galanga. The rhizomes of these four plants are commonly used as spices in various Asian cuisines, particularly in soups because it offers such a potent and spicy flavor. Despite being closely related to ginger, galangal has more of a citrus, earthy or pine flavor, and each type has different nutritional compositions. The rhizome of this plant has rings around it and is pale yellow or white in color. It looks similar to both ginger root and turmeric and is often mistaken for them. [1]

The taste of these spices is one of their biggest differences from ginger and turmeric, but the active ingredients also differ. Ginger is high in gingerol, and is much softer than galangal, meaning that you can basically only slice this rhizome. Turmeric is high in curcumin, beta-carotene, and other antioxidants, whereas galangal has galangin, beta-sitosterol, and other flavonoids. All three are very healthy and may look similar, but they serve very different culinary and medicinal purposes. [2] 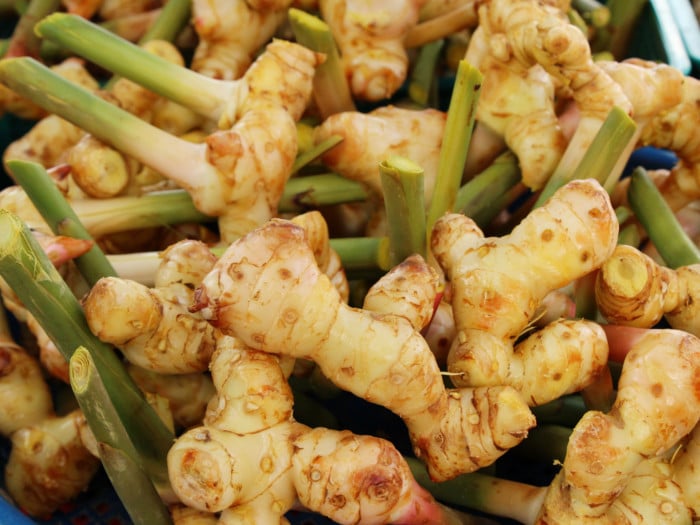 This Asian spice is packed with vitamin A, vitamin C, and iron, as well as dietary fiber and a good amount of carbohydrates. A single serving of this herb only delivers 45 calories, but it provides impressive amounts of antioxidants, including quercetin, alpine, galangin, and beta-sitosterol, among others. [3]

The most impressive health benefits of galangal are its ability to act as an anticancer and anti-inflammatory agent, strengthen the immune system, increase sperm motility, and protect the brain.

Galangin, a primary component found in Galangal, was found to have anticancer properties, according to a 2016 study published in the journal Nutrients. The study found it to be especially effective in the case of melanoma, hepatoma, and colon cancer. Another 2014 research also highlighted its antiproliferative potential against gastric cancer cell lines. [4] [5]

Similar to turmeric and ginger, this spice is known to reduce inflammatory conditions, including rheumatoid arthritis, gout, headaches, irritable bowel syndrome, and other common issues. This powder can be made into a paste or consumed internally to benefit from these effects. [6]

With good amounts of vitamin C, backed up by unique antioxidants like alpine and galangin, the immune system can receive a well-deserved break, which will reduce unnecessary inflammation around the body. [7]

Chronic disease is often the result of chronic inflammation and the negative effects of free radicals. With the half-dozen antioxidants present in this spice, your risk of arthritis, diabetes, and coronary heart disease could decrease. [8]

Another benefit of antioxidants is its impact on brain health. By reducing beta-amyloid plaque deposition in the brain, this spice can slow or prevent the onset of neurodegenerative disease. [9]

Studies have found that this spice can specifically increase sperm motility and production, which is good for those struggling with their sexual performance or virility. [10]