Can gaming be good for your health

Most people know that certain things are healthy. We know that we should eat plenty of fresh fruits and vegetables, and get enough exercise, and we are mostly aware of the healing powers of meditation and yoga. We don’t need to be told that we shouldn’t drink too much, and we gladly take our vitamins. However, do you know that gaming or playing video games can have beneficial effects on your body and brain?

The parietal lobe, the frontal lobe and other parts of the brain can be strengthened by playing video games. Research has shown that grey matter increases in the areas of the brain associated with tasks such as planning, spatial awareness, and motor skills as a result of playing video games. This means that gaming can actually increase the strength and efficiency of your brain, making it work better in a multitude of ways, and making you more productive. [1] 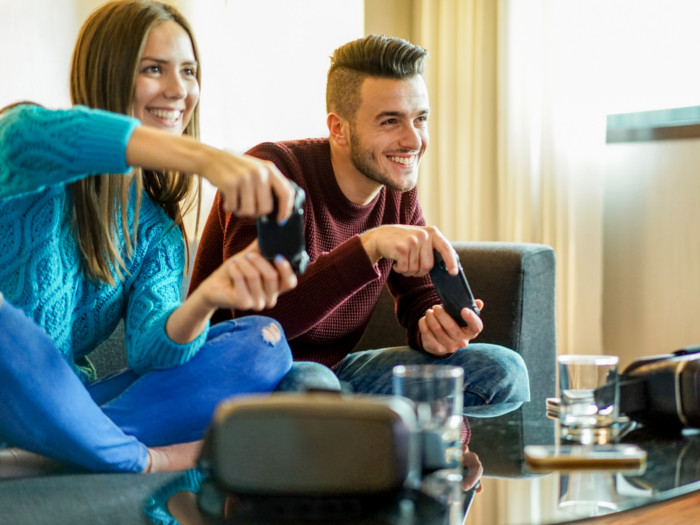 Gaming is a form of de-stressing for many people. Photo Credit: Shutterstock

Other ways in which playing video games can improve your cognitive health include:

As a result, gaming can train your brain, and also be your therapist (in a manner of speaking!).

Gaming is increasingly being used in medical settings as a form of treatment for various conditions.

It can, research has shown, aid in recovery after a traumatic event or surgery, reducing the incidence of flashbacks to the event and speeding up the recovery. [3]

Gaming has been used in the treatment of eye conditions such as a so-called ‘lazy eye’. Studies have shown that, if participants covered their ‘good’ eye when playing video games, their weaker eye would improve, suggesting video games can have ocular benefits. [4]

Research has yielded promising results in using gaming to treat attention disorders such as ADHD, as playing certain types of video games can also help to focus attention.

There are also numerous potential applications in neurological fields. For example, in elderly care, gaming can provide a cognitive boost to those who have neurological disorders such as Alzheimer’s, and it has also been shown to improve the mental health of the elderly. Thus, video games could be used as a standard treatment in retirement communities and hospitals throughout the country. [5]

Playing video games could also help to build social connections, and thus it could be used as a solution to our increasingly disconnected society, particularly amongst the young. We can bring people together and forge a community through gaming!

Perhaps the icing on the cake (low carb, gluten-free, low sugar cake of course!) is that some forms of gaming can be good for your cardiovascular health. Exergaming, for example, helps you play games using your body as the controller. Games like Wii Fit and those that involve a dance mat can get you moving, get your heart pumping and be the equivalent of a gym workout, so you can really integrate them with your fitness regimen.

It seems clear from the current body of evidence that gaming can have quite surprising and profound effects on your brain, your body, and your wellbeing. Thus, the fact that gaming has a somewhat bad reputation is a little unjustified. However, you should be aware that different games have different benefits, so you need to treat gaming like a buffet and take a little of everything. Platform games, according to research, will improve your spatial skills and memory, while puzzle games such as Tetris can help you stick to a diet (variety is, as they say, the spice of life!). [6]

So, spread the word, gaming can be good for you!


Marcus is the community and content manager at ComputerPlanet.co.uk, creating and sharing content to their community and beyond. Computer Planet designs and builds custom gaming PC’s, CAD workstations and desktop computers.