The term geriatric pregnancy often brings up the image of a grandmother having a child but, in reality, this type of pregnancy is much more common and safer than many people assume.

What is Geriatric Pregnancy?

This may come as a surprise but in the past, any pregnancy past the age of 35 was considered a geriatric pregnancy. In recent years, women who become pregnant after age 35 are now considered to be of “advanced maternal age”. This change in terminology more accurately reflects the state of being pregnant in your mid-30s, as most people don’t consider 35 years of age to be “geriatric” by any means. [1]

While optimal fertility does occur at a younger age for both men and women, it can still be perfectly safe for a woman to have a child after she passes the 35-year mark. While there are some risks that are elevated in an advanced maternal age pregnancy, improvements in medical technology and longer life expectancies are making this type of pregnancy far more common – and less dangerous – for women around the world. The oldest known successful pregnancy was actually in a 66-year-old woman, nearly twice the so-called cut-off age of the geriatric pregnancy. [2]

You will have to work more closely with your doctor and will likely need more regular check-ups throughout your term, but for women pushing 40 who are still looking forward to bringing a bundle of joy into the world, don’t lose hope!

Some of the common risks of geriatric pregnancy include a higher risk of preterm labor, Downs’ syndrome, low birth weight, cesarean delivery, gestational diabetes, and high blood pressure, among others.

There can be a slightly increased risk of very early labor (before 28 weeks) with older mothers, but the rates of preterm labor (before 32 weeks) are not statistically different than in younger mothers. Interestingly enough, perhaps due to better financial, emotional, and medical situations, preterm births have a higher survival rate when born to older mothers. [3]

Fertility does begin to decrease with age, but not as dramatically as people seem to think. By the age 0f 35, only 10% of the women are infertile; by age 45, that number increases to 85%. In other words, if you regularly speak with your doctor and have discussed your pregnancy goals, he can give a good indication of your fertility level and your likelihood of conceiving as you age. [4] 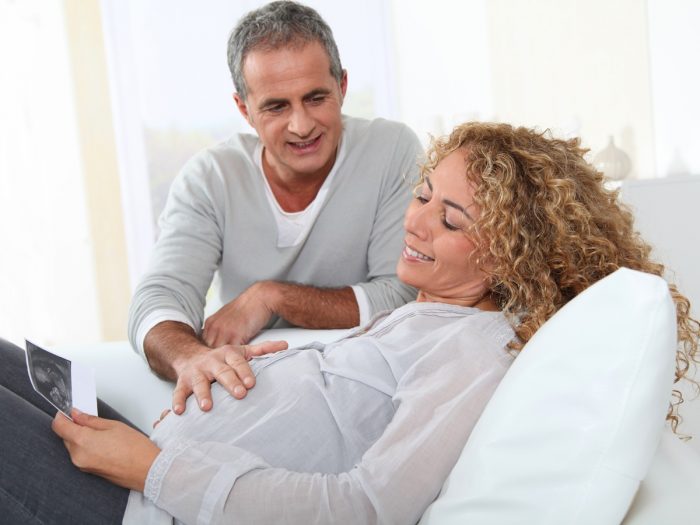 Stillbirth is a danger for women of all ages and has a variety of causes and risk factors. While the rate of stillbirth is higher in older women, it is not a significant risk until after the age of 40. [5]

One of the most common misconceptions about geriatric pregnancy is that the risk of chromosomal disorders, such as Downs’ syndrome, is much higher. In fact, the risk of Downs’ syndrome in women over 35 is less than 1%, although that risk does increase to nearly 4% by age 40. [6]

Due to various changes in the body and the delicate approach taken with most geriatric pregnancies, it may be recommended that you undergo a cesarean delivery to better protect the health of the mother and child. [7]

According to a study published in the European Journal of Obstetrics & Gynecology and Reproductive Biology, gestational diabetes rates do tend to be higher in older mothers. Although this form of diabetes is also largely dependent on your lifestyle choices and dietary habits. For older mothers, paying close attention to sugar intake may be more important to avoid this temporary condition. [8]

As you age, whether or not you’re pregnant, you have a better chance of developing high blood pressure. To avoid hypertension during pregnancy, as well as preeclampsia, you will need to closely follow your recommended diet and fitness regimen. [9]

While geriatric pregnancy is technically any pregnancy over 35, pregnancy over 40 is another age marker that many people worry about. It is true that the risks outlined above will increase with age but, as mentioned, there are still plenty of women who give birth to healthy, normal children once they cross the age of 40. The important thing is to maintain communication with your doctor and accept that your pregnancy may be more difficult or risky as you age.

Rate this article
Average rating 4.0 out of 5.0 based on 12 user(s).
Read This Next:
Popular Articles