Ghee Vs Butter: Which is Healthier

There is an ongoing debate over ghee vs butter, and while each has certain good qualities, there are some differences that may sway your decision.

Ghee and butter have a lot in common and are closely related, but one is considered acceptable for health, while the other is seen as a health booster.

Butter is a dairy product that is made by churning fresh or fermented milk or cream, which allows the butterfat to separate. Butter is typically composed of approximately 80% butterfat. The remainder of butter is made of water and milk proteins, and added sodium, in some cases. [1]

How is butter made

Butter is made by first separating cream from milk and then churning the cream till the butter separates from the liquid.

What is the smoke point of butter

The smoke point of butter is 300 degrees Fahrenheit. [2] 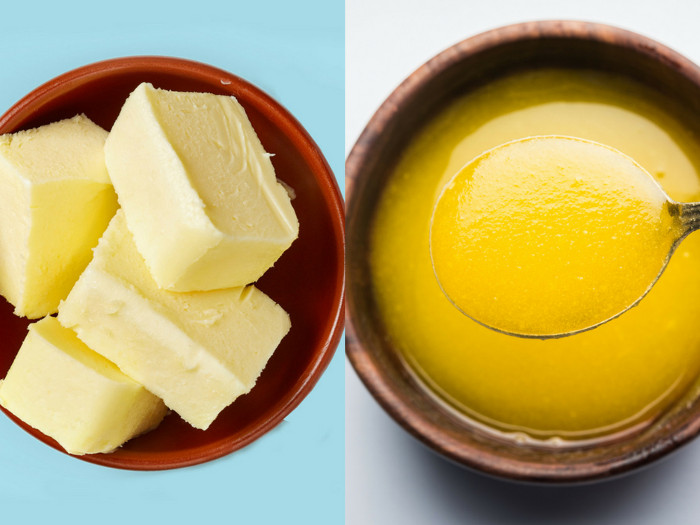 Butter is popularly used as the following:

Due to the high level of saturated fat, butter is known to increase your serum lipid profile and overall cholesterol levels. This can be dangerous for those who are already at risk of cardiovascular problems and can increase your chances of the following: [3]

Note: Experts recommend that saturated fats do not make up more than 7% of your daily calorie intake, so moderation in butter consumption is essential.

Ghee is also known as clarified butter and is directly derived from the butterfat.

How is Ghee made

Commonly produced, found, and cooked in India, ghee is prepared by simmering butter and removing impurities as they separate from the pure butterfat. [4]

What is the smoke point of Ghee

Ghee has a considerably higher smoke point – at nearly 500 degrees Fahrenheit – which means it is more versatile as a cooking base. Those impurities that are removed while simmering the butter include milk proteins, including lactose. [5]

Ghee is popularly used for the following:

The ratio of saturated fat to monounsaturated fat isn’t too different between butter and ghee, and both should be consumed in moderation for that reason. For people who are severely lactose intolerant, butter can still cause indigestion, but there will be no side effects when using ghee.

Differences Between Ghee and Butter

The takeaway should be that both butter and ghee are delicious and easy to cook with. However, both should only ever be consumed in acceptable quantities to prevent a dangerous rise in saturated fat concentration within the body.

Rate this article
Average rating 4.1 out of 5.0 based on 10 user(s).
Read This Next:
Popular Articles