Giloy, a medicinal herb from India, may have still not earned its spot under the sun like ashwagandha and tulsi (holy basil) but it does have the potential to be a natural supplemental remedy for certain health conditions. The top research-proven benefits of giloy include the ability to boost immunity levels, purify the blood, lower blood sugar levels, and reduce arthritis pain. Let’s look at this in detail.

What is Giloy (Guduchi)?

Giloy or Guduchi (Tinospora cordifolia) is a shrub with large heart-shaped leaves that is native to India. The root, stem, and leaves are used in Ayurvedic medicines to treat several health conditions. It is also found in Bangladesh, Sri Lanka, and Myanmar. The herb, revered for its immune-boosting properties. is also known as “amrita” or health elixir in India, and more colloquially in other countries as heart-shaped moonseed. Giloy has potent antispasmodic, analgesic, antipyretic, and anti-inflammatory properties, and is often given as a remedy to treat fever. It is available in most pharmacies as well as online in capsule form, and is usually mixed with other herbs and spices like ginger and black pepper. [1] [2] 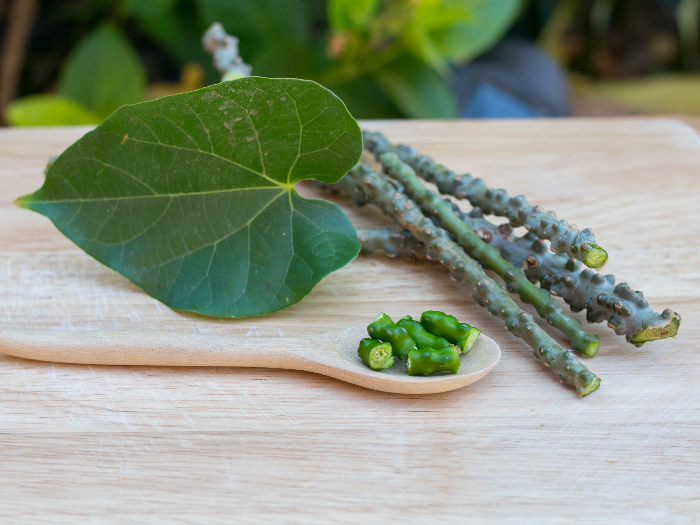 While giloy has been used for centuries in India, the research has been limited to animal models and the effects are anecdote-based. Studies need to be done with humans on a large scale to verify the effectiveness and potency of the herb. Here are what researchers have listed as the top benefits of giloy or Guduchi.

Giloy is used to traditionally boost the immune system. In Ayurveda, it is termed as Rasayana, which makes it one of the herbs which rejuvenate the entire system. A 2017 report published in the Journal of Immunology Research found that the aqueous and methanolic extracts of the herb had immune-stimulatory properties. The animal study revealed that giloy potentially helped increase the killing ability of macrophages, the white blood cells that form an important part of the immune system. It was also effective in fighting infection and showed antimicrobial properties on gram-negative bacteria. [3] [4]

In Ayurveda, giloy is often prescribed to manage diabetes and blood glucose levels. Researchers in India found that the methanol extract of the stem, orally administered to alloxan-induced diabetic rats for 40 days, helped lower blood glucose levels. Additionally, the antioxidants in the herb scavenge free radicals caused due to diabetes and prevent or slow down cellular damage in the body. [5] [6]

Giloy is commonly used as a blood purifier and recommended as an Ayurvedic remedy for acne, skin rashes, and other allergies. According to a 2010 study published in the Toxicology Journal, giloy has a protective effect against lead toxification. Using an animal model, researchers found that the aqueous extract of stems and leaves of giloy prevented the decrease of red blood cells and white blood cells that occurs when the cells are exposed to lead. [7] [8]

Ancient Ayurvedic literature recommends Tinospora cordifolia as a remedy for rheumatoid arthritis and other musculoskeletal conditions. While there is not a lot of scientific evidence on it, researchers found that an alcoholic extraction of the herb appeared to stimulate the growth of osteoblasts, the cells that form new bone. The study, published in the Journal of Ethnopharmacology, suggests that the herb should be explored as a potential anti-osteoporotic agent.  [9]

Other benefits: Giloy also works as a laxative when combined with jaggery. A decoction made with the herb, when had first thing in the morning, works as a de-worming solution.

Word of Caution: There are no known side effects of taking giloy. However, people with diabetes should check with their doctor before taking it as it lowers blood sugar levels and may interfere with other medicines.