Drinking gin is a refreshing experience, and it is most noted for its pine flavor due to its main ingredient, juniper

Gin is a type of alcoholic spirit and is one of the many that derives its primary flavor from juniper berries. For more than 1000 years, this spirit has been a popular beverage in Europe and other parts of the world. The term gin is a broad classification and may include spirits produced in various ways and with different qualities or strengths. Some gin relies on pure grain for its fermentation, while others may use other alcohol, such a scotch or vodka. The defining characteristic of all gins in the world is that they are flavored with juniper, giving them a sweet and tangy flavor. Depending on the method of production, some gins are gluten-free. [1]

As with most other spirits, gin may have some benefits for health when consumed in moderation. The story goes that Dr. Sylvius invented gin in the Netherlands in 1650. He used neutral grain spirits and flavored it with the oil of juniper berries as a remedy for kidney disorders. Dr. Sylvius named the flavored spirit ‘genievre‘, which meant juniper in French. It started being commercially produced by 1655 and was made popular by the English soldiers serving in and around that area. [2] 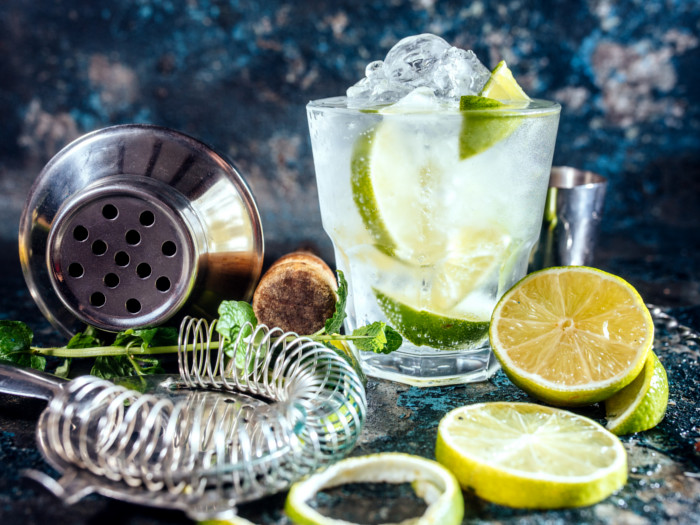 What is Gin Made From?

Gin can be made from a number of different substances, including rice, wheat, seeds, as well as using other alcohols as a base, such as a vodka. The most common source for gin is a pure grain mixture, which produces pure ethanol, a neutral substance to which other flavors can be added during the distillation process, or once the alcohol is put into barrels. [3]

In terms of nutrition, gin is one of the lowest-calorie alcohol available, containing only 97 calories per 1.5-ounce shot. There are no essential micronutrients or macronutrients found in this alcohol. However, it may contain some essential oils and compounds from the ingredients in gin production, such as coriander seeds, juniper berries, etc. [5] [6]

Alcohol by volume (ABV) is the standard measure of alcohol content in any beverage, expressed as a percentage. The alcohol content or ABV in gin generally ranges from 35-40 percent. [7]

Although this spirit is widely available in most stores around the world, some people prefer to make their own at home.

There are some side effects of drinking gin, particularly when it is consumed in excess. Some of the most common side effects include the following: [8]

Drinking excessive amounts of alcohol, which includes gin, can increase your risk of cancer and heart disease. Drinking in moderation is recommended. According to the Centers for Disease Control and Prevention, people who should not drink alcohol include women who are pregnant, individuals younger than 21 years of age, and people who are recovering from alcoholism or cannot control the amount they drink. Also, it should be avoided by people who are planning to drive or any other activity that required focus and skill. [9]

Rate this article
Average rating 4.4 out of 5.0 based on 17 user(s).
Read This Next:
Popular Articles