If you’ve ever had a stomach ache, reaching for a can of ginger ale feels like second nature. However, many people don’t make the connection between ginger ale and the highly potent ginger root, but both can be very beneficial to your overall health.

What is Ginger Ale?

Ginger ale is quite simply carbonated water flavored with natural or artificial ginger flavors. It is claimed that it originated in Ireland in the middle of the 19th century, but the pale, bubbly beverage we commonly think of today first appeared in the early 20th century in Canada. One of the most famous producers of this beverage in the world remains the Canada Dry company. [1]

Although the name contains “ale”, the vast majority of this beverage does not contain any alcohol, and even when made naturally, is created using a short-brew method that prevents fermentation and the creation of alcohol. However, even as a non-alcoholic beverage, this drink has a refreshing and unique flavor that is a favorite of people around the world. Perhaps more importantly, it does possess some of the same health benefits of ginger, particularly when it comes to anti-emetic and anti-inflammatory effects. [2] 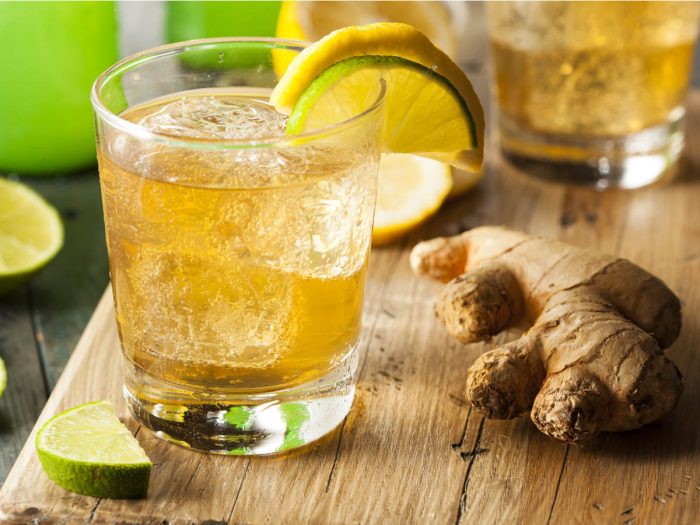 People may think of ginger ale as another form of soda, but in fact, this beverage does have some important nutrients, including calcium, iron, copper, and magnesium, among others. It is relatively low in calories, but most manufacturers add sugar to make the drink more palatable. There is no fat or cholesterol in this beverage, nor is there any fiber or protein. Brewing it naturally will usually impart more nutrients that store-bought or artificially flavored ale.

The most important health benefits of this drink may include its ability to relieve arthritis symptoms, prevent certain cancers, treat gastrointestinal distress, improve circulation, and reduce oxidative stress, among others.

For generations, this beverage has been used to relieve the pain and inflammation of osteoarthritis and other conditions affecting the joints and muscles. [4]

Studies have found that this drink may be able to reduce the presence of ovarian cancer cells, thanks to its antioxidant activity, which seeks out and neutralizes cancer-causing free radicals. [5]

Perhaps the most popular use of this carbonated beverage is to possibly relieve stomach indigestion and nausea. The potential anti-inflammatory and anti-emetic properties of ginger help to relieve excess flatulence, as well as cramping and bloating. Pregnant women and those with IBS may also find relief by using ginger ale regularly. [6]

Certain thermogenic properties in ginger can help speed the metabolism, which may aid weight loss efforts and improve your overall health. [7]

The primary difference between ginger beer and ale is that ginger beer may contain alcohol. This is because ginger beer is allowed to ferment, but even at this point, the amount of alcohol is quite low (approximately 0.5%, as compared to 3.5%-6% in most beers). In some parts of the world, ginger beer and ginger ale are interchangeable, due to this minimal level of alcohol, but the consistency of ginger beer is also different. It will appear cloudier and may have a “head” on the top of the glass, unlike ginger ale, which looks like any other carbonated soda. [8]

Is Ginger Ale Good for You?

Ginger ale can have certain health benefits, as explained above, but it is also high in sugar, which should be carefully monitored, particularly in people with diabetes.

Rate this article
Average rating 4.4 out of 5.0 based on 63 user(s).
Read This Next:
Popular Articles