The health benefits of ginger root oil can be attributed to its digestive, carminative, expectorant, antiseptic, analgesic, anti-inflammatory, stimulating, and aphrodisiac properties. The benefits of ginger oil include its ability to help with stomach problems, nausea, heart strokes, and indigestion. It is also good for relieving inflammation, respiratory problems, and menstrual disorders.

What is Ginger Root Oil?

Ginger root and ginger oil are used as preservative and flavoring agents. They are helpful in digesting food items such as meat and poultry and are frequently added to meat recipes to soften it considerably, making it easier to digest.

The health benefits of ginger root oil include the following:

Ginger root oil is one of the best remedies for indigestion, stomach ache, dyspepsia, colic, spasms, diarrhea, flatulence, and other stomach and bowel related problems. Ginger or ginger oil is often added to recipes, especially in India, as it helps in improving digestion. Ginger tea is also used for relieving stomach problems. Furthermore, it can increase your appetite, which is great for people who are trying to put on weight.

Ginger oil is an antiseptic and carminative substance. As a result, it can be used to treat food poisoning. It is also used for addressing intestinal infections and bacterial dysentery. 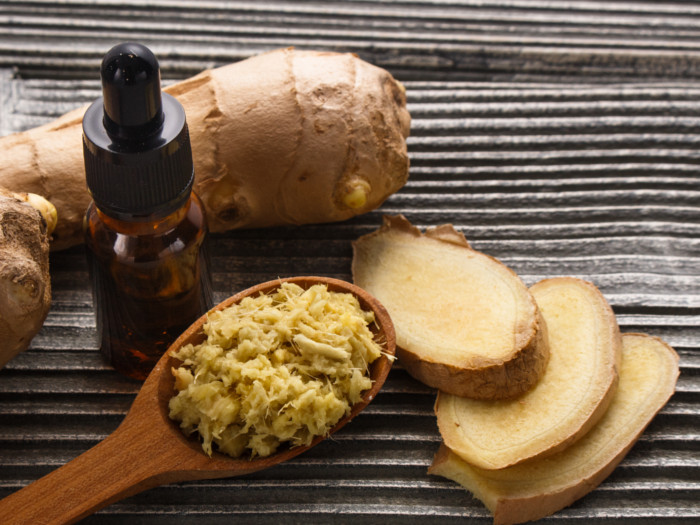 Ginger oil has a warm, spicy scent and can be used in aromatherapy and for topical applications. Photo Credit: Shutterstock

Research has shown that ginger root and its oil are also effective against nausea, motion sickness, and vomiting. Use of ginger may also result in a reduction of pregnancy-related vomiting in women. [1]

Ginger root and ginger oil are effective against yellow fever and malaria as they have mosquito repelling qualities.

Ginger oil or ginger paste is often topically massaged on aching muscles to remove muscle strain. It is further believed that regular use of ginger leads to the reduction of prostaglandins, which are the compounds associated with pain. Therefore, ginger helps in pain relief. Recently, a few Chinese researchers have reported that ginger can be very effective in treating inflammation of the testicles.

The extract of ginger is often used in traditional medicine to reduce inflammation. Research has now proven that its anti-inflammatory properties can be attributed to the presence of a substance named zingibain. It is analgesic in nature and reduces the pain caused by muscle aches, arthritis, rheumatic conditions, headaches, and migraines.

Irregular and painful menstrual discharges can be treated with ginger root oil. It’s anti-inflammatory properties help in reducing the production of prostaglandins, which often cause painful uterine contractions during menstruation.

In China, it is strongly believed that ginger boosts your heart health. Many people use ginger oil as a measure to prevent various heart conditions. Preliminary research has indicated that ginger may be helpful in reducing cholesterol levels and preventing blood clots. With reduced cholesterol levels and blood clotting, the chance of blood vessel blockage decreases, thereby reducing the incidences of heart attacks and strokes.

Ginger is helpful for male health as well. Since ginger root and its oil are an aphrodisiac in nature, they are effective in eliminating impotency and preventing premature ejaculation.

It is also believed that ginger root juice is able to dissolve kidney stones. Ginger root oil aids in keeping you hydrated thereby helping in expelling the stones, if there are any.

Ginger oil is rich in minerals, which aid in hair care. Also, it helps get rid of the dry, itchy scalp, which is often a major cause of dandruff. The oil’s antiseptic and anti-inflammatory properties also assist you in keeping the scalp clean and healthy.

According to the Memorial Sloan Kettering Cancer Center, preliminary research has found ginger may help against nausea caused due to chemotherapy but more evidence is needed for it. Additionally, research conducted by a team in Tehran, Iran (Roghiyeh Pashaei-Asl et al., 2017) found that ginger extract has anti-cancer properties to induce apoptosis. [2] [3]

Word of Caution: It should be noted that ginger oil is very strong and should, therefore, be used carefully and sparingly.

Rate this article
Average rating 4.0 out of 5.0 based on 317 user(s).
Read This Next:
Popular Articles