Drinking ginger water provides a wide range of health benefits, and this potent elixir is also quite easy to make at home. Let’s take a look at it in detail below.

What Is Ginger Water?

Ginger water relies on the ginger root as its base ingredient as per the book, Medicinal Plants of the World, Volume 3. The root has long been used in international cuisine and traditional medicine in many parts of the world. To make ginger water, peel a 2-inch-long section of ginger root, chop it up into thin slices, and then add it to a quart of water and boil it for at least ten to fifteen minutes. After this boiling process, strain the ginger pieces out of the liquid. Adding lemon and/or honey is a popular option. As an alternative to boiling, mix the ginger root with cold water in a blender and blend for one minute, then strain. [1]

How To Use Ginger Water?

Most people simply drink either the hot liquid as a tea, or chill it for a cool, refreshing beverage. If the flavor of ginger is too intense, dilute the mixture with water, add a bit of coconut milk, or mix in lemon juice or honey. Drinking a cup of ginger tea or water is the most common and simple use, but the liquid can also be used as a flavorful soup stock, or even as a brine for fermented foods, such as sauerkraut or pickles. 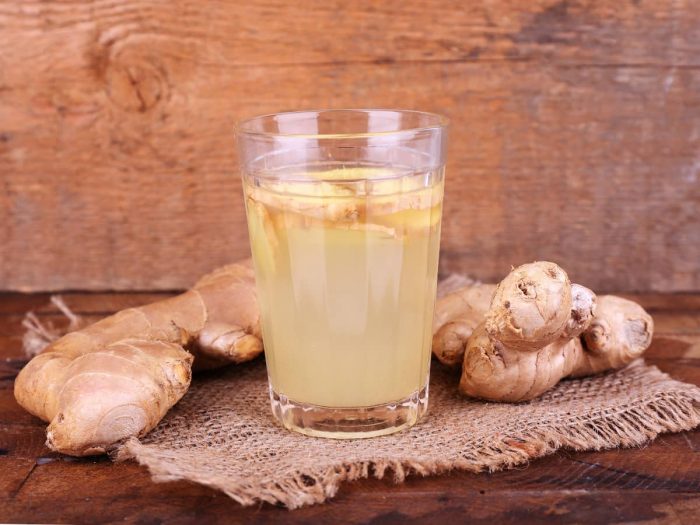 Ginger has been a staple of traditional medicine for thousands of years, and this powerful tonic provides a wide range of health benefits that are still trusted today! The best benefits of ginger water include better digestion, improved immunity, reduced inflammation, and weight loss. It also helps reduce inflammation.

One of the most effective uses of ginger water is to relieve digestive problems, including nausea, gas, bloating, indigestion, and heartburn. This herbal remedy can also be used to ease the symptoms of morning sickness during pregnancy.

Ginger water is very popular as a homeopathic cold remedy, as it has antioxidant and antiviral properties that can help fight off all kinds of illnesses, both chronic and acute as per a paper published by Hiroe Kikuzaki from the Department of Food & Nutrition, Osaka City University, Osaka, Japan. [2]

A popular anti-inflammatory substance, ginger water can help alleviate inflammatory symptoms caused by rheumatism and arthritis. This powerful liquid can also reduce inflammation of the gums, soothe the pain of hemorrhoids and settle the stomach.

Another benefit of the anti-inflammatory properties of this drink is that it can ease the pain and discomfort associated with menstrual cycles.

A 2015 meta-analysis of randomized clinical trials showed that ginger supplementation can help reduce blood glucose levels and HbA1c levels (glycated hemoglobin). However, it does not have any significant effect on fasting blood insulin levels.  [3]

Ginger water acts as an appetite suppressant and can reduce hunger and cravings. It may also lower the absorption rate of fat into the body, which makes it an ideal addition to your weight-loss diet.

There is some scientific evidence that ginger can reduce LDL cholesterol and triglycerides in the blood, which could decrease the risk of heart disease by preventing the development of atherosclerosis.

According to a study conducted by Shafina Hanim Mohd Habib from the Department of Biochemistry, the anti-inflammatory properties of ginger tea also increase blood circulation and reduce muscle swelling, leading to pain relief in all areas of the body. [4]

Side Effects of Ginger Water

The adverse effects of this generally healthy beverage are very mild, if they exist at all. These side effects can include the following:

When these occur, it is generally a result of drinking too much ginger water or consuming too strong a mixture. It’s a good idea to ask a medical professional if any of these side effects occur.

Rate this article
Average rating 3.3 out of 5.0 based on 8 user(s).
Read This Next:
Popular Articles