Drinking ginkgo biloba tea is one of the best ways to combine a rejuvenating and delicious beverage with a wide range of health benefits.

What is Ginkgo Biloba Tea?

Ginkgo biloba tea is a popular warm beverage brewed from the whole or cut leaves of the ginkgo tree, which bears the scientific name Ginkgo biloba. This tree is known as the oldest on Earth, with fossils dating back more than 270 million years; it is the last non-extinct species in its taxonomic division, Ginkgophyta. Various parts of this tree have been used for thousands of years for medicinal purposes, and it is considered sacred in many parts of the world. The tree is native to China, but its benefits have now become known across the globe. [1]

Brewing these leaves into a tea isn’t the most popular use of this plant, as ginkgo supplements are quite common, but the benefits are well worth the effort of brewing this tonic. There is also no caffeine in ginkgo biloba tea, which makes it a great alternative for people trying to cut back their dependence on that stimulant chemical. 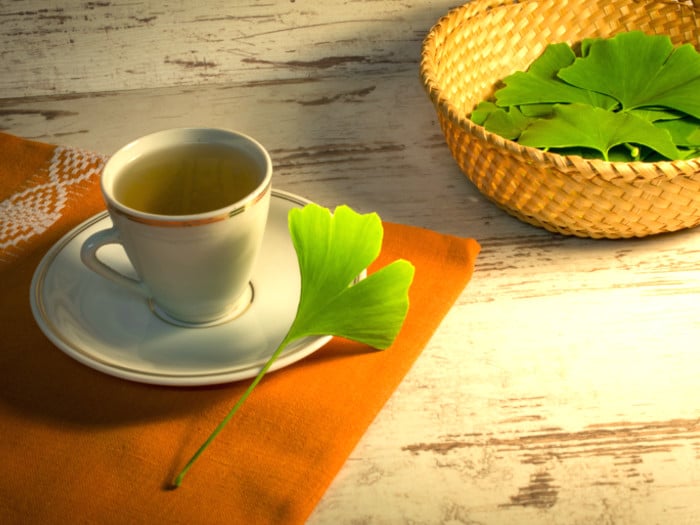 The primary benefits of ginkgo biloba tea include its ability to do the following:

Reduces the risk of Alzheimer’s Disease

A report published in the International Journal of Molecular Sciences states that one of the main reasons for the popularity of this supplement is the effect it can have on Alzheimer’s disease, and other neurodegenerative diseases, thanks to its high antioxidant content. [2]

Some people use ginkgo biloba as a natural antidepressant, rather than using pharmaceuticals, which often have a range of side effects. Before mixing this natural remedy with medication, however, be sure to speak with your doctor. [3]

Aside from being a brain booster, the antioxidants in ginkgo biloba tea also help to reduce the effects of oxidative stress in other parts of the body, including in cellular mutation, which can lead to cancer and other chronic diseases. [4]

Another excellent aspect of ginkgo biloba is the effect it can have on circulation. When you have better blood flow and oxygenation in the body, you are better able to become aroused, and you will find that your sex drive has returned! [5]

It has been shown in many studies that ginkgo biloba tea is able to reduce blood clotting and make it more difficult for your arteries to be clogged by cholesterol. [6]

How to Make Ginkgo Biloba Tea?

Preparing ginkgo biloba tea at home is easy if you have dried ginkgo biloba leaves, which are available at most natural health food stores. Let us take a look at the recipe below.

If you do consume too much ginkgo biloba, or if you are sensitive to this particular herb, you may experience some side effects, such as a headache, nausea or general stomach discomfort. These side effects are rare, particularly if a normal amount of this tea is consumed (no more than 2-3 cups per day). Before adding ginkgo biloba to your health regimen, however, be sure to speak with your doctor.

Rate this article
Average rating 3.8 out of 5.0 based on 89 user(s).
Read This Next:
Popular Articles