Ginkgo biloba leaves, rich in antioxidants and other nutrients, helps fight inflammation, improve heart health, promote brain function, may reduce the symptoms of dementia, and treat symptoms of anxiety and depression. The unique health benefits of ginkgo also include its ability to improve cognition and reduce the risk of Alzheimer’s. Use of ginkgo helps lower blood pressure, alleviate pain, protect the nervous system, reduce the risk of cancer, and delay aging. It is also used to reduce the symptoms of PMS, erectile dysfunction, asthma, hemorrhoids, altitude sickness, tinnitus, vertigo, multiple sclerosis, and fibromyalgia.

What is Ginkgo Biloba?

Ginkgo biloba extract (GBE) is derived from the leaves of the ginkgo biloba tree (also known as maidenhair tree), and has many herbal uses. For more than 270 million years, ginkgo biloba has managed to survive and remains only mildly endangered. Due to the vast range of medicinal qualities, and the importance of research on the evolution of plants, ginkgo biloba trees are widely protected around the world. [1]

Ginkgo nuts, found inside ginkgo seeds, are eaten in some cultures as delicacies, particularly for Chinese New Year, but the most common use of ginkgo is to make an herbal supplement from extracts of the seeds and leaves.

Ginkgo leaf is rich in phenolic compounds, flavonoids, terpenoids, and other organic chemicals from which the extensive list of ginkgo health benefits are derived. According to the USDA National Nutrient Database, ginkgo nuts have high levels of vitamin A, vitamin C, niacin, sodium, phosphorus, copper, and potassium. However, the protein-rich nuts are best eaten in a small quantity at a time as it can be toxic. [3] [4]

Let us look at some of the most important health benefits in detail:

A 2011 report, published in the Neuropsychiatric Disease and Treatment Journal, by Dr. Alexander von Boetticher, Ear, Nose and Throat Surgery in Lueneburg, Germany, revealed that Ginkgo biloba extract (GBE), when monitored in appropriate dosages, can be effective in reducing tinnitus. Ringing in the ears is a symptom of many underlying issues, including circulatory disorders. Ginkgo leaf contains antioxidants and promotes circulation. The flavonoids and terpenoids in it protect the nerves, heart muscles, and blood vessels from free radicals, thereby preventing the phantom noises that irritate the ear. [5]

Ginkgo may help relieve those suffering from cognitive disorders such as Alzheimer’s and dementia. A report published in the Neurological Review, suggests that there have been measurable improvements in cognitive ability and activity due to Ginkgo. This is primarily due to the antioxidant compounds in GBE, including terpenoids and flavonoids. These components stimulate neural activity and keep cognitive pathways fresh and clear of amyloid plaque. They also aid in reducing the symptoms of autism and attention deficit hyperactivity disorder (ADHD) in children. [6] 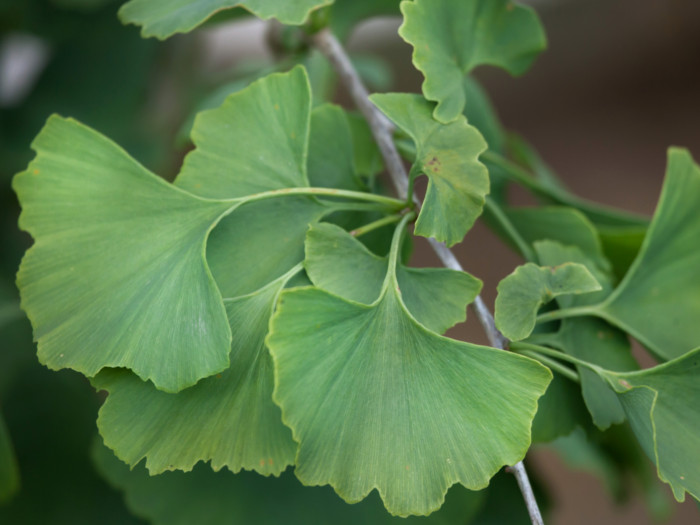 leaves from the Ginkgo biloba tree have been a common treatment in Chinese medicine. Photo Credit: Shutterstock

In his report published in Psychopharmacology, Dr. K. A Wesnes, a researcher, suggests that ginkgo biloba extract (GBE) has an ability to increase memory and retention, boost focus, and stimulate creative thinking. Of course, the controversy stems from whether this is a placebo effect, since the medicinal benefits of this ancient plant are commonly known, but millions of people around the world turn to GBE for a brain boost. It also helps relieves the symptoms of schizophrenia. Indeed an amazing herb! [7]

A research study in Phytomedicine: The international journal of phytotherapy and phytopharmacology, have shown that ginkgo biloba extract is able to increase blood vessel dilation and stimulate blood flow to extremities in the body. This includes the skin and essential organs, properly oxygenating the entire body and boosting energy and strength. An increase in blood flow also helps those who suffer from claudication or poor circulation, allowing them to walk longer distances without pain. Due to its anti-clotting effect and the anti-inflammatory properties, GBE is also taken by those who suffer from gout. [8]

In multiple sclerosis (MS), the immune system tends to attack the protective covering of the nerve cells in the body. This damage, furthermore, interrupts the ability of the nervous system to communicate with other parts of the body, resulting in many disorders. Ginkgo extract (GBE) is thought to be beneficial for people suffering from (MS). Researchers from the University of North Carolina, USA, conducted a small study on 22 participants, with findings that showed modest positive results and GBE reduced symptoms of MS in some volunteers, including fatigue. [9]

A report published in the Wilderness and Environmental Medicine journal has confirmed that pretreatment with ginkgo biloba prevents altitude sickness. Also known as acute mountain sickness (AMS), this form of physical distress is normally seen in people who venture from sea level to elevations more than 2000 meters. [10]

Another common reason in ancient medicine for using ginkgo biloba is its powerful effect on vision. The antioxidants present in ginkgo may help keep the ocular system clear of oxidative stress, thereby preventing macular degeneration and cataracts. However, given the small sample sizes of this research, no definitive scientific conclusions can be made–although, supplementation with ginkgo is likely not harmful, so why not give it a try?! [11]

There are mild analgesic qualities of ginkgo biloba, likely resulting from anti-inflammatory properties of its organic compounds. In other words, when inflammation decreases, so does the pain it causes. This makes it a popular option for people recovering from injuries or wounds, as well as those who are suffering from chronic headaches. [12]

Ginkgo also aids against social anxiety disorder due to the presence of beneficial compounds such as terpenoids and flavonoids. This is mentioned above in its ability to increase cognitive abilities.

A research paper on gingko published in Advances in Therapy journal has stated that GBE extends its benefits to treating the symptoms of vertigo. Also known as dizziness, vertigo is a condition where one feels that the surroundings are moving when in reality they are stationary. Ginkgolides and bilobides, which are the unique constituents of this herb, may help in reducing the effects of vertigo. [14]

A research report in the Journal of Alternative and Complementary Medicine has shown ginkgo biloba to be effective against pre-menstrual syndrome (PMS). It may lessen the severity of headaches, anxiety, and fatigue, and also muscle pain, which occurs during menstruation. Ginkgo is also very beneficial in improving the mood of some women affected by PMS. [15]

Ginkgo can dilate blood vessels and improve blood circulation to all the parts of the body, including the genitals, which eventually helps improve reproductive health. It improves sexual health by increasing libido. It has positive effects on maintaining the hormonal balance through proper serotonin levels, thereby decreasing the reasons that cause erectile dysfunction. However, it may have some side effects, including GI distress and headaches, according to the research, so take cautiously for these purposes. [16]

Ginkgo lowers inflammation because of its antioxidant properties and therefore, has positive effects on nerve functioning. People who have used it have reported ease in breathing and have witnessed lesser symptoms of asthma. [17]

A report in the Journal of International Medical Research has shown that ginkgo biloba extract, when combined with a chemical compound coenzyme Q10, helped improve quality of life scores in those with fibromyalgia. This disease is characterized by widespread muscle pain, memory loss, irregular sleep, and fatigue. More controlled studies are now planned to look at the specific mechanisms of this beneficial effect. [18]

Ginkgo biloba extract has been linked to lower blood pressure and the elimination of blood clots throughout the cardiovascular system. These two effects, when combined, can be a major boost to heart health. This extract is often used in countries such as France and Germany for these benefits but is still undergoing testing in other parts of the world. Dilating blood vessels reduces the strain on the heart, while the anti-clotting capability significantly reduces your chances of suffering from a heart attack or stroke. [19]

One of the most “pop culture” uses of ginkgo biloba is as an anti-aging secret. While many of the claims are a bit exaggerated, the antioxidants in GBE do help delay signs of aging such as wrinkles and age spots and also keep the skin tight and healthy. [22]

Ginkgo biloba exerts a positive influence on the nervous system by speeding up reaction time and lowering the risk of developing nervous disorders, according to herbal medicine. Also, intake of ginkgo biloba has been linked to reducing symptoms of Parkinson’s disease and Raynaud’s disease. [23]

Ginkgo biloba is effective as a short-term treatment in reducing acute pain caused by hemorrhoids. It also relieves the symptoms such as inflammation and bleeding, which happen because of the increased pressure on the veins of the rectum. [24]

Ginkgo biloba is available in various forms which include tablets, capsules, liquid extracts, and dried leaves for teas.

There are some side effects that may accompany this beneficial herb. The list is as follows: [26]

Allergic reactions to ginkgo biloba are moderately common due to the presence of ginkgolic acids, which are similar to those found in cashews or poison ivy. [27]

Use of Ginkgo biloba is not recommended in the following conditions:

The ginkgo tree is the last extant branch of the Ginkgophyta division. It is native to China and primarily found there, as it is difficult to produce saplings of the trees, and some ginkgo trees are over 2,500 years old.

Note: Do not consume the leaves and seeds of the tree directly. Be careful when first using ginkgo biloba and always discuss the potential risk factors with a medical professional before adding this powerful herbal supplement to your regimen.

Rate this article
Average rating 4.0 out of 5.0 based on 230 user(s).
Read This Next:
Popular Articles