What is Gluten-Free Food?

Gluten-free food is any foodstuff that doesn’t contain gluten, a composite protein found in various grains, namely wheat. Barley, rye, oats, and various other related cultivars also contain gluten, but due to the widespread cultivation and use of wheat around the world, this is the grain that receives the most gluten attention. The reason that gluten-free foods have risen to such prominence in the past decade is due to the surge in diagnoses of celiac disease, as well as other allergic conditions related to the consumption of this protein. While many of these cases were once diagnosed with irritable bowel syndrome (IBS) or various other gastrointestinal conditions, it is clear for many of those people that gluten was the culprit all along. [1]

Thickening agents and fillers can mimic the effects of gluten, but these foods tend to be more expensive and less readily available. Some people have also chosen to pursue gluten-free diets, even if they don’t have an allergy to the grain protein, so information on common gluten-free foods has never been more important. 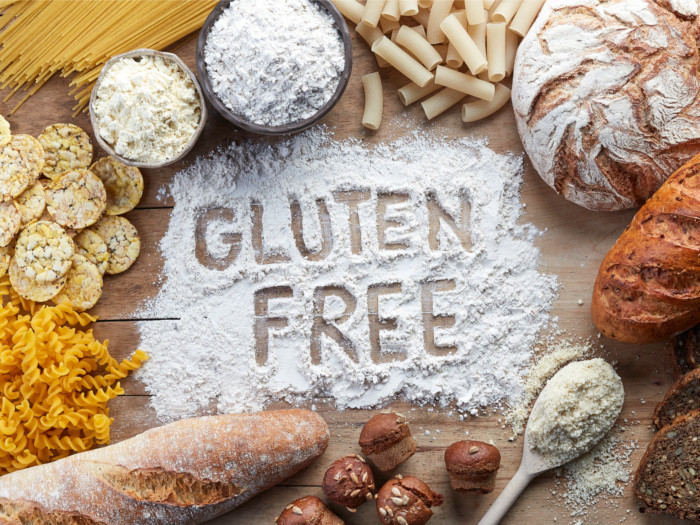 There are many gluten-free options you can explore, from pasta, breads, to rice cakes. Photo Credit: Shutterstock

Since vegetables are not grains, there is no danger of there being gluten in them, but there is a wealth of nutrients, minerals, and other antioxidants, as well as dietary fiber, making these a vital part of any diet. [2]

Similar to vegetables, there are no fruits that naturally contain this grain protein, making this safe for anyone looking to cut down their wheat intake, while simultaneously boosting their carbohydrate and phytonutrient levels. [3]

Legumes of all kinds are a popular gluten-free food because they can provide many of the carbohydrates that are lost when the bread is cut out of the diet, as well as high levels of B vitamins and dietary fiber. [4]

High in vitamin D, calcium, and protein, milk is an important element of a gluten-free diet, as it can increase certain key minerals and vitamins the body needs, but may be lacking.

Cottage cheese is high in protein, selenium, and phosphorous, as well as various B vitamins, which are some of the nutrients you may miss out on when you eliminate gluten.

The high starchy carbohydrate level in potatoes makes them an excellent substitute for bread and other gluten-containing carbohydrate sources. [5]

Soy products are not only important for vegetarians and vegans, but also for those who want to cut out gluten, as it is high in protein and minerals, and can be prepared in various ways to replace other breaded protein sources. [6]

Rich in healthy fats and minerals, sunflower seeds, flax seeds, and pumpkin seeds, among others, should be added to any gluten-free diet. [7]

Perhaps the most common carbohydrate substitute for those going gluten-free, rice is easy to prepare and highly versatile. [8]

If you are following a gluten-free diet, whether for personal reasons or a gluten intolerance, you will want to avoid all of the following foods.

Rate this article
Average rating 4.0 out of 5.0 based on 9 user(s).
Read This Next:
Popular Articles