While goat milk is a relatively novel dairy alternative in the US, it is one of the most commonly consumed milk in the world. In terms of production value, it ranks third, after cow and buffalo milk. Most of us know goat milk as an ingredient in cheeses like feta. It is now increasingly seen as an alternative to cow milk. But what is the real difference between the two? Is one more beneficial than the other? It’s time to evaluate goat milk Vs cow milk.

In the US, cow milk is often taken as the dietary default. Apart from calcium, it is considered one of the most important sources of vitamins like riboflavin (B2), biotin (B7), and cobalamine (B12). The consumption of cow milk and dairy products meets nutrient recommendations, as per a review published in 2016 in the journal Food and Nutrition Research. It can also protect against some chronic diseases, with very few adverse effects. [1]

Goat milk has an important role to play in the economy and diet of many developing countries where it is an important source of animal protein, as pointed out by the Encyclopedia of Food Sciences and Nutrition. In the US, it is seen more as an alternative to cow milk. Till recently, goat milk was more popular for its cheeses. [2] 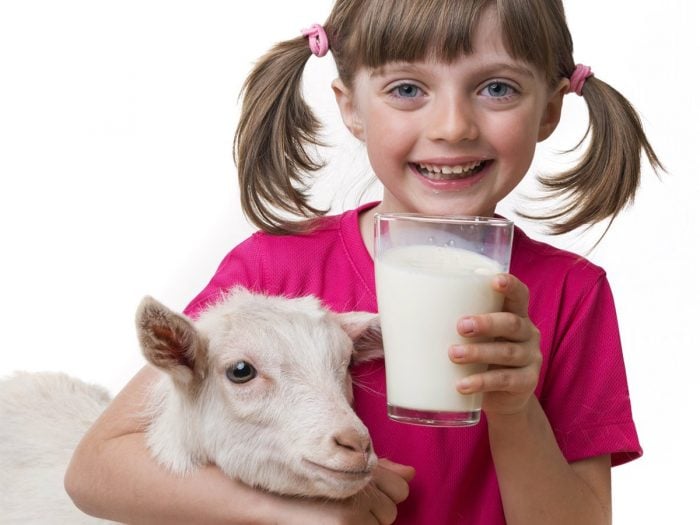 How does the goat milk Vs cow milk nutritional debate stack up? Both are very similar in their nutritional content, with goat milk slightly higher in its energy content, proteins, monounsaturated fats, and vitamin B12.

Is Goat Milk Better For Your Health?

Goat milk gained popularity as a healthier alternative to cow milk. Studies have shown that this may have some truth. According to animal research by scientists from the University of Grenada, published in the Journal of Dairy Research, calcium-fortified goat milk showed better results in preventing anemia when compared to calcium-fortified cow milk. [5]

A review published in the Journal of Dairy Science in 2017 compared goat milk with cow milk. Goat’s milk was found similar to human milk, had a higher proportion of small fat globules and a softer curd formation. It has different allergenic properties. The smaller size of the fat globules (1/5th the size of fat globules in cow milk) means that the dispersion of fat is more homogenous in goat milk. It was, however, found to be nutritionally deficient for infants. [6]

Is Goat Milk Safe For Children?

A study published in Evidence-Based Research in Pediatric Nutrition found that goat milk neither had any clear nutritional advantage over cow milk nor was it less allergenic for infants. Like cow milk, the unmodified version of goat milk is not suitable for children. This is because goat milk has a high proportion of protein and minerals with low folate content. The European Food Safety Authority has laid down the minimum protein content requirement for cow and goat milk in follow-on formula at 1.8 g/100kcal in order to be suitable for infants. The goat milk available for children is usually fortified with additional nutrients, especially vitamin D and folic acid. [7] [8]

Is Goat Milk Safe For People With Allergies?

One of the common perceptions about goat milk is that it is the preferred alternatives to cow milk for people with allergies. However, this is not supported by research. A double-blind, placebo-controlled research published in the Journal of Allergy and Clinical Immunology found that goat milk is not an appropriate substitute for cow milk for children with IgE-mediated cow milk allergy or CMA. In fact, another study published in the journal Allergy found that goat milk allergy could be more severe than cow milk allergy in its manifestation. Goat milk could be as allergenic as cow milk, affecting older children and appearing later. More importantly, children suffering from cow milk allergies are also likely to react to goat milk, while those with goat milk allergy do not show any clinic manifestation on taking cow milk. [9] [10]