Drinking gynostemma tea is a great way to improve your overall health, but there are a few details concerning this tea that is important to understanding.

What is Gynostemma Tea?

Gynostemma tea is an herbal tea brewed from the dried leaves of the Gynostemma pentaphyllum plant, which is commonly known as jiaogulan or ‘poor man’s ginseng’. Native to parts of China, Japan, and Southeast Asia, this plant’s benefits can also be enjoyed through its extract, or in a capsule form. The plant is actually a climbing vine and can now be found naturalized in many other Asian countries. This tea can be found at exotic import stores and health shops around the world, including in the United States. [1]

This tea is so widely sought after because of its unique nutrient composition, which includes certain adaptogens and antioxidants that can increase the levels of energy and endurance in the body. The leaves are also rich in minerals, such as magnesium, calcium, zinc, iron, and manganese. 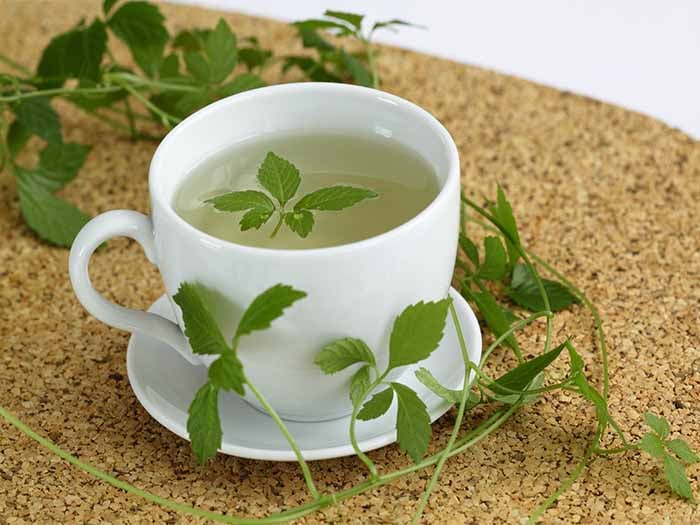 Herbal teas have many benefits for your health. Photo Credit: Shutterstock

The many benefits of gynostemma tea include its effects on endurance, strength, cholesterol, inflammation, fatigue, and diabetes, among others.

Gynostemma is an adaptogen, a substance which brings your entire body back into balance. One of the active ingredients in this tea are saponins, called gypenosides, that can help the body adapt and learn how to protect itself more effectively. [2]

The blood-thinning properties of this tea can help prevent blockage from cholesterol, thus lowering the risk of stroke and heart attack. [3]

The stimulant nature of this tea makes it ideal for boosting the metabolism and aiding in weight loss efforts. [4]

In traditional use, gynostemma tea is believed to extend life, which may be due to the antioxidants and adaptogens found in the green, leafy herb. It’s often called the ‘immortality drink’. [5]

As per a study published in the journal Hormone and Metabolic Research, this tea can help control blood sugar and insulin levels in the body. [6]

Brewing gynostemma tea at home isn’t overly difficult and can make a delicious beverage that can be enjoyed at any time of day. Let us take a look at the recipe below.

Despite the many wonderful benefits of this tea variety made from the jiaogulan vine, there are some potential side effects, such as an upset stomach, problems with the immune system, and complications with pregnancy and breastfeeding.

Rate this article
Average rating 3.5 out of 5.0 based on 12 user(s).
Read This Next:
Popular Articles