5 Surprising Benefits of Honey and Ginger

The health benefits of honey and ginger for treating respiratory problems are unmatched by any other concoction. They help to prevent cancer, improve blood circulation, and strengthen immunity. Furthermore, honey is an excellent medium for transmitting the benefits of ginger to the body.

Both ginger and honey have their own individual health benefits and the combination of the two provides additional bonuses.

A mixture of ginger and honey works wonders for the body. The health benefits include the following:

It is believed that a mixture of ginger and honey, along with black pepper, is capable of treating or reducing the effects of asthma. It is a naturally soothing and anti-inflammatory mix, which releases tension, promotes the flow of oxygen to the lungs, and helps in the relaxation of the blood vessels.

The mixture of ginger and honey is an excellent expectorant and, therefore, provides instant relief to people suffering from cough, cold, sore throat, and a runny nose. 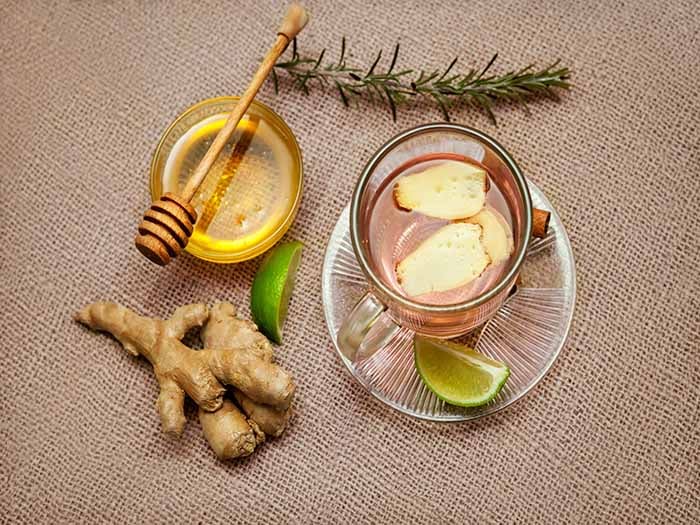 It is easy to make ginger tea at home from scratch. Photo Credit: Shutterstock

According to a study led by Max E. Levine, et al. high protein meals with ginger helped relieve delayed nausea associated with cancer. Patients often suffer from debilitating nausea following these intense procedures, and they turn to alternative solutions to eliminate it.

Ginger speeds up the emptying of the stomach through its digestive properties, which can prevent the discomfort and probability of nausea. Nausea from chemotherapy is caused by cisplatin, a primary chemotherapy component, and ginger can balance this out with its powerful effects.

A study by Vutyavanich T, et al. showed that ginger helps reduce nausea and vomiting that is associated with pregnancy and “morning sickness”. combined with the naturally soothing effects of honey, make for a powerful preventative solution against vomiting and nausea caused by various sources.

Ginger, on the other hand, is known to have many medicinal benefits because of its antioxidant effect ( Aeschbach et al. 1994; Ahmad, Katiyar, and Mukhtar 2001). A 2015 study by Miho Akimoto, et al. suggests that ginger has the potential to act as an anticancer agent against pancreatic cells. However, more clinical trials are required to establish the benefit.

Further, an article on the role of ginger in treatment and prevention of cancer by Sahdeo Prasad (The University of Texas MD Anderson Cancer Center), et al. suggests that the use of ginger is effective against gastrointestinal cancers such as gastric cancer, liver cancer, and pancreatic cancer. However more human studies are required for further evidence.

In terms of cancer prevention, a study by Hakim L, et al. suggests that combined treatment of ginger and gelam honey may help in enhancing the chemotherapeutic effects of  5-fluorouracil  against colorectal cancer. Therefore, a honey ginger tonic can not only help to reduce the symptoms of chemotherapy but also to reduce the risk of cancer.

Lastly, this gives honey ginger tonic the ability to increase the absorption of other nutrients from food. This mixture has been traditionally given to children to ease stomach irritation because it is a very soothing solution.

The antioxidant properties of honey and ginger tonic have been shown to moderate prostaglandin behavior in the body. Prostaglandins are lipid compounds that are derived enzymatically from fatty acids, present in ginger. These prostaglandins are found throughout the body and are functional elements in almost all organ systems. In terms of heart health, the moderating effects of honey and ginger tonic have shown a propensity to ease blood vessel tension, thereby reducing blood pressure and the chances of conditions like atherosclerosis, heart attacks, and strokes.

People all around the world, especially in India, always keep both ginger and honey in their houses and prepare this beneficial mixture for someone falling ill with cold or a cough.

How to consume Honey & Ginger?

Honey is often added to ginger root tea, or ginger and cinnamon tea. You can replace sugar (if you are a sugar user) with honey while preparing the ginger tea, thereby giving your ginger tea an extra boost.